Turns out that people like looking at gross things. This is because gross things are gross. If you look at them all bug-eyed; or smell them when they’ve grown green fur; or poke their extruding innards with a stick, then afterwards you’ll feel as if you have conquered their nauseating existence with your own somewhat less nauseating existence.

By observing the foul and soldiering on, we display our fortitude. It may be an extremely lame sort of adulthood ritual, but then we can’t all hunt grizzly bears with sharp rocks, can we? The bears won’t put up with it.

Unlike bears, gross things are plentiful and unharmed by our proven superiority over them. You may have noted that gross things are actually appearing before you in ever-increasing numbers: board game movies, graphic depictions of torture, the House of Representatives, etc. These things all, in their own ways, are gross.

Over the weekend I watched two films that are both undeniably gross. They are gross in different ways, however. Their grossness serves different masters and that is what I wish to touch upon.

I wish to touch upon different grossnesses. That’s the sort of guy I am. 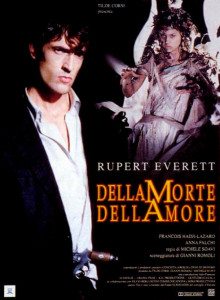 The first film I watched was a film I despised. It is an Italian zombie film of sorts, called in English Cemetery Man and in Italian Dellamorte Dellamore (which is a pun, roughly meaning ‘in death, in love’). By either name, it is a rancid curd of a picture.

In it, Rupert Everett plays a loathsome cemetery manager — Dellamorte — who, along with his disgusting and intellectually stunted assistant Gnaghi, fights off a listless and constant stream of zombies. Dellamorte falls for an artificially buxom widow (Anna Falchi), who only gets turned on by ossuaries. Anyway, to quote Randy Newman, she dies. Then she comes back and dies and comes back and dies. Then Dellamotre meets an identical woman, who doesn’t like men with penises so he gets his junk deactivated with some sort of gag needle. Then the still unnamed woman gets raped by the Mayor, learns from the experience that she does appreciate penises after all, and leaves Dellamorte for her rapist.

So it’s that kind of film.

I can’t believe I killed the woman I love at least three times.

Dellamorte Dellamore is the kind of film in which watching the characters go about their daily lives — even without the cheapo gore effects — makes you feel ill. It is gross. Watching Gnaghi (François Hadji-Lazaro) court the Mayor’s daughter’s head, or Dellamorte murder three women (one of whom is also Anna Falchi in her third incarnation) because one of them may be a prostitute is gross.

Director Michele Soavi appears to be attempting to say something with this film about life and death and love but, if so, he is an idiot. 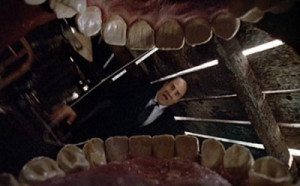 There is nothing here but despair and revolting despair at that. It is a high school freshman’s hallucinatory idea of a deep thought wrapped in misogyny and fake blood. Is the world real? Is love real? Are you serious?

The only real question in this film is why anyone dead would want to come back to life in it in the first place. Even for those who love a good a zombie slaughter — me, say — what we have here is a total lack of brains. Severed heads attack and shovels split skulls, but you will find nothing herein as repugnant as watching Gnaghi eat. 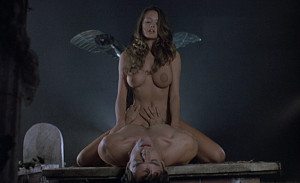 Dellamorte Dellamore’s vision of love: fake boobs on a tomb.

The point of this grossness is not the conquering of fear or the surmounting of adolescent urge. It is exactly the opposite. Here, we relish the obscene because we cannot distinguish anything pure in our lives. There is nothing worth protecting in Dellamorte Dellamore and so it cannot dream of addressing the subject of love. 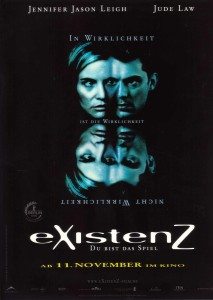 In contrast, David Cronenberg’s eXistenZ — intentionally — is gross. What makes its grossness delectable is exactly that intentionality.

Jennifer Jason Leigh plays a sort of futuristic, idolized video game designer named Allegra. In this alternate world, video games only play in the screen of your eyes. You plug a living game ‘pod’ into your ‘bioport’ — an orifice excavated into your spinal column — in order to enter shared game/dream states that are in many ways indistinguishable from reality. The twitching, clitoral pods and the raw, vulgar bioports are gross, even if you don’t lubricate them with your tongue. Also gross are the weird animals and weapons and behaviors that Cronenberg’s characters encounter.

The world of the film is tainted, and the worlds of the game within are further corrupted. 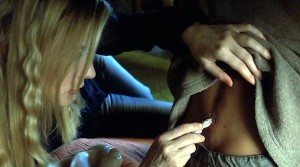 Her new game is seminal.

Allegra survives an assassination attempt as she is testing her newest game. She is spirited away by Ted Pikul (a young Jude Law) who isn’t one of her bodyguards, but rather just a random marketing drone. Together the pair attempts to evade those who want Allegra dead. They simultaneously try to test her endangered game by playing it, i.e. by leaving their bodies behind to experience a shared delusion.

If you don’t see the similarities between this and your own immersion into the worlds of the film, you’re not paying attention.

There is only one copy of Allegra’s new game, called ‘eXistenZ’, and it lives in her organic pod. That pod — her pet —  has been wounded and might die. So Allegra’s idea could easily disappear from existence, or eXistenZ. Our world, which we believe to be real, might vanish with a single death. Just one fatality, even that of a creature only debatably alive, is enough to destroy entire worlds. 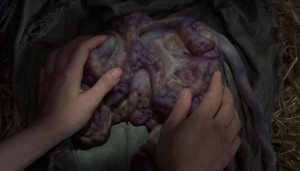 Won’t you play with me?

In the film, we are draped in layers of reality and imagination. The horrible things we see and — through the agency of Allegra and Pikul — do may be real, or they may be just part of a game. We cannot tell and it is unclear if there is a difference anyway. The grossness of one world infects the others. Corruption does not just travel from the real world down into fantasy, but goes both ways, allowing fantasy to pervade and pervert reality.

This is intentional. We are intentionally made uncomfortable and presented with the disgusting so we might decide whether the gross of imagination is substantively any different from the gross of reality. These are questions asked of you by a man who reigns over the biologically twisted, the master of disgusting, obscene body horror, David Cronenberg.

If you play Grand Theft Auto, is it okay to beat up and rob prostitutes in the game? Or does doing so make you akin to Dellamorte? 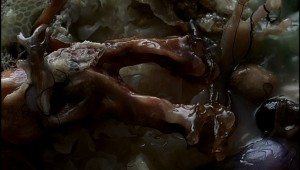 In eXistenZ, the visual grossness correlates with the emotional. We see lewd and repugnant things so we might startle into a new perspective. When the film is over, you will remember the chitinous gun that fires human teeth but you will instead be thinking about the usurping power of fantasy.

Both the gun and its use are gross, regardless of which level of reality you inhabit. Coming to terms with what that signifies may make you more adult.

It’s not enduring the vile that matters, it’s understanding what makes it vile. To do that, you may need to get a little gross.