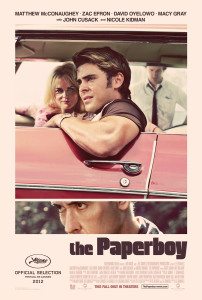 When it played Cannes last year, The Paperboy was one of those movies the audience booed, jeered, and cat-called for minutes after it ended. Appartently people didn’t like it. Then again, Cannes has a tradition of highly vocal responses. Others in the crowd praised the movie effusively. Eventually it opened wide to a similar reaction: alternately loved and hated. Or liked and hated, anyway. Let’s just say it either enthralled or repulsed. Over at the Onion A.V. Club, the editors collectively named it the worst movie of 2012, in a list of 20 films that didn’t even include the actual worst movie of 2012. Dubious, indeed.

Needless to say, my curiosity was piqued. Was this an ignored masterpiece? A rightfully despised disaster? I decided to bring the movie into the Mind Control Laboratories, fire up our coal-burning engines, and find out for myself.

The Paperboy, I discovered, is actually two movies. They are easily defined: one of them doesn’t have John Cusack in it. The other one does.

I don’t think you can love film and not find the first of these movies compelling. I don’t think I’m spoiling any surprises when I tell you that there’s a scene where Zac Efron swims into the ocean, is stung by multiple jellyfish, crawls half-dead onto the beach, and is then peed on by Nicole Kidman to somehow deactivate the poison. That pretty much sums up the level this movie exists on.

One scene you will remember

The performances are joyfully insane. Kidman, as Charlotte Bless, lover of incarcerated men, does dumb and scheming and sexually ripe better than anyone, as she proved way back when in To Die For, and Matthew McConaughey, as Miami reporter Wade Jansen, is as greasy, torpid, depraved, and weird as he’s ever been. McConaughey has really been reaching into the stranger depths of his soul of late, with The Paperboy, Bernie, Killer Joe, and Magic Mike all in 2012. As for ex-Disney boy Zefron, he’s entirely credible as Jack, Wade’s younger brother, and the one mostly normal character in this town. 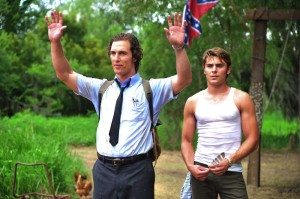 Right, so there’s a story to this movie, actually rather too much of one. It’s directed by Lee Daniels and written by him and Pete Dexter (who wrote the book it’s based on). The story is simple, yet the style of the movie manages to make it complicated and hard to grasp while it’s happening.

It’s set in Florida in the early ‘70s, and his narrated for no reason I could really fathom by the Jensen’s housecleaner, Anita (well-played by Macy Gray). So we meet Charlotte, who maintains a wild imaginary love life writing to convicts, and thinks she’s found The One in Hillary Van Wetter (John Cusack, to whom we shall be returning, never you fear), who allegedly murdered a popular yet racist sheriff, but who’s defense at trial was suspiciously lacking. Charlotte thinks he’s innocent. She convinces reporter Wade to return to this, his hometown, from Miami, and investigate. Whereupon Jack meets Charlotte and falls hard for her. 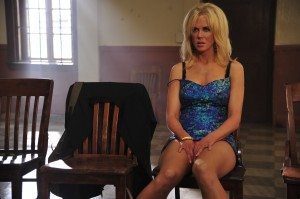 Charlotte having a moment

And that’s about it. They talk to Hillary in jail now and again, and otherwise fuck around with one another, revealing various twisted secrets, mostly sexual, in a meandering way far more effective in novels than in movies. So for instance, McConaughey turns out to be a repressed homosexual who enjoys being tied up and abused by black men, in a scene far more outrageous than the jellyfish one. Suffice to say, this is a tawdry, lewd, and salacious movie.

And you know where it’s going from the start. Which maybe explains why it’s told in a way meant to cover up more than explain. Daniels shoots with a bit of a documentary-like style, conversations overlapping, people out of frame, creating the feeling that you’re spying on something you shouldn’t be. 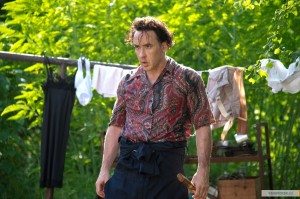 Oh yes. I’m not making this up.

Which isn’t so bad. This one movie that is The Paperboy without John Cusack. You’re not going to turn it off out of boredom, that’s for sure. Out of bafflement? Maybe.

Now we come to the other movie, The Paperboy with John Cusack. Now, in general, I like Cusack. He’s very good at certain roles. He starred in the last great Woody Allen movie, Bullets Over Broadway, which I love. But there are roles Cusack should not play. Hillary Van Wetter is one of them. The main one, really.

Cusack is in a different movie. He gives it his all as a swamp-raised, depraved, simple-minded killer, but he just doesn’t have that much to give. He’s John Cusack. There’s no getting away from it. In his first scene, when our heroes come to talk to him, he and Charlotte essentially fuck without touching one another. The Kidman half of the scene is great. The Cusack half makes you want to throw out your Better Off Dead videotape. It’s creepy watching him, and not in a good way. 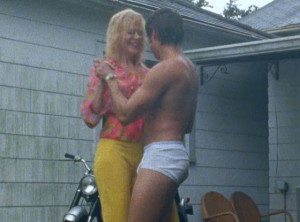 What the ladies come to see this for, Efron in his underwear

I think this is what killed the movie for many viewers. It’s a fine line a director walks, making a movie this over-the-top and sexually deranged. The actors have to go deep into extreme characters for it to work. Any sense that what’s happening is silly, any winking at the audience, in other words, will kill it dead in a second. Unfortunately for The Paperboy, Cusack is that wink.

With another actor in the role, one with the depth McConaughey and Kidman bring, the movie could have been genuinely great. Or, with every actor on the level of Cusack, it could have been a disasterous camp classic in the realm of Showgirls. As it is, The Paperboy is a hyrbid. It’s not awful by any means, but it’s not particularly good either.