Soon all will become Elvis.

Even if you’re too youthful to remember Mojo Nixon, MTV, and/or the 20th century, you certainly remember Elvis Aron Presley. He’s that guy you keep bumping into in the Adult Superstore; he’s the one who calls you at dinner time to try to sell you a fistful of over-ripe durian trimmings. He’s the guy who makes your hips rock ‘a’ hula.

In this, the last week before the son of the wrathful sky god blesses the desert tribes with slightly more UV and a cubic yard of now-useless wrapping paper, we rightfully turn our adulating gaze upon his, the holiest of forms. We bow our heads and briefly stop buying things to praise Elvis as he streaks majestically across the sky, delivering peanut butter and banana sandwiches to all the malnourished children.

That is Mind Control Double Feature #74’s gift to you: the knowledge that an old, obese, (probably) dead popularizer of African-American musical forms has easily obtained the sort of mythical status once reserved for undead, male-chromosome-bereft manger urchins and Cthulhu, Lord of R’lyeh. 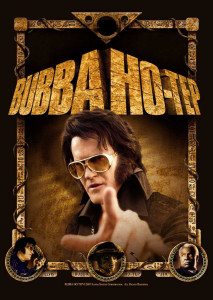 It’s Elvis and John F. Kennedy in a rest home vs. a cursed mummy.

Do I really need to say anything else?

Man, you people! So demanding. But, this is the season of giving things (with gift receipts), so I’ll expound on Don Coscarelli’s Bubba Ho-Tep.

The first thing you should know is that Coscarelli made this film on the cheap, personally taking the picture around the country, much as he did with his latest, John Dies at the End. Even though it never really had a full-on theatrical run, Bubba Ho-Tep built a significant cult following.

How could it not: Elvis and JFK battling a mummy! 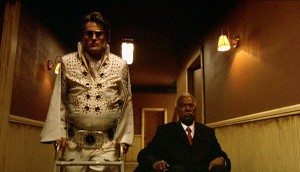 The King and the Prez

So, it turns out in this picture that Elvis is not dead, he’s just old, impotent, and has an unfortunate pecker-located growth. The King—here played brilliantly by Bruce Campbell (of Evil Dead fame)—traded places with an Elvis impersonator in his heyday, then a series of accidents conspired to stick the true king with the pretender’s persona. Too bad, so sad.

Luckily, he gets dumped in the same rest home as John F. Kennedy! That’s right; JFK survived the assassination attempt in Dallas, got dyed black by the secret service for his own protection, and, uh, yeah. Now he’s in a decrepit old age home in Mud Creek, Texas, being played by Ossie Davis, and fighting soul-sucking Egyptian ghouls. Or one ghoul really and some very fake looking giant insects. 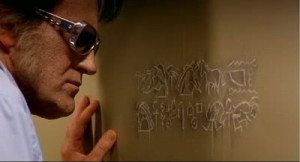 Sorry. I got excited.

Some people say that Bubba Ho-Tep is a sly discourse about aging, fame, and self-worth. I say it’s about Elvis and JFK fighting a mummy. It is a debate that will likely never be settled.

Bubba Ho-Tep features raunchy humor, dodgy practical effects, more originality than the big bang, and Elvis and JFK fighting a mummy. I may have mentioned that already, though. 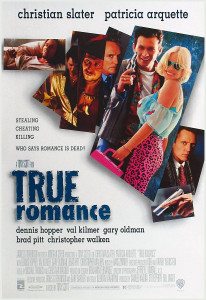 I will now admit to maintaining an unpopular opinion. I think True Romance is Quentin Tarantino’s best film.

I know, right? You’re saying: ‘Hey asshole. That’s not even a Quentin Tarantino film!” Which, if that were true, would make a whole lot of other films eligible for being Quentin Tarantino’s best film, but in this case, that isn’t true. The big Q-ball (a nickname I just made up) actually wrote True Romance before he wrote and directed Reservoir Dogs.

Which film—Reservoir Dogs—would be my favorite of his if it weren’t so derivative and if I ever wanted to watch it again, which I don’t. It’s good. I just never seem to have any desire to watch it.

True Romance though. Tarantino wanted to direct the thing himself, but we got lucky, he lost interest, and instead it fell into the lap of Tony Scott—a man not renown for subtlety. Scott rejiggered the script’s non-lineal narrative to match a more traditional march-of-time structure, changed Tarantino’s downer ending, and voila: a hell of a lot of fun.

Nice pants. You kiss your mother with those pants?

True Romance is basically the big Q-ball’s wet dream, before he got famous enough to have wet dreams that involved killing Hitler or redeeming America from the scourge of slavery through Italian-interpreted Western exploitation fantasy. Here, everything is much simpler. A film nerd (Christian Slater as Clarence Woorley/QT in his dreams) falls for a call-girl (Patricia Arquette as Alabama), accidentally stumbles onto a suitcase full of narcotics, and—with the help of Elvis (Val Kilmer)—makes a lot of stuff go boom. 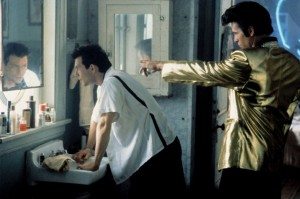 How comes no one gets advice from old, fat Elvis?

The story has drive and direction, the cast is fantastic—with standout appearances by Christopher Walken, Dennis Hopper, and James Gandolfini and seriously weird characters from Gary Oldman, Brad Pitt, Bronson Pinchot, and others.

Actually, this may be Brad Pitt’s best performance in a motion picture.

And throughout it all: Elvis Aron Presley, appearing as an unnamed guardian angel to guide Clarence through his warped, Tarantino-esque version of manhood.

You might attest that Pulp Fiction is brilliant, or that Kill Bill out-meta’s meta, or that no one can nail an Australian accent like the big Q-ball, but I say all that’s hogwash. For my money it’s True Romance. That’s the only film of Quentin’s that I’m reliably happy putting on and watching any old time.

Although, to be perfectly honest, I’m not a big Quentin Tarantino fan. I think he’s vastly overrated, cinematically unintelligible regardless of his intent, and also kind of a buffoon. 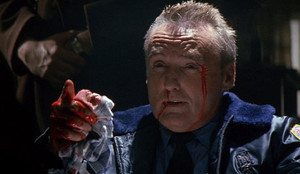 Take, for example, what he said about one of the best scenes in True Romance: Dennis Hopper’s monologue about Sicilians, which is delivered facing death, to a gangster played sublimely by Christopher Walken. This is a scene in which Tarantino takes great pride:

I had heard that whole speech about the Sicilians a long time ago, from a black guy living in my house. One day I was talking with a friend who was Sicilian and I just started telling that speech. And I thought: ‘Wow, that is a great scene, I gotta remember that’.

Basically what he’s saying is: “The best scene in my script? I didn’t write it. But I’m really proud of it.”

That’s okay because the big Q-ball isn’t essentially a filmmaker anyway; he’s a collagist. People tend to like his collages but then they also like Coldplay, so there you have it.

Anyway. Elvis. Tarantino got that right. Tony Scott also got the music right, despite choosing Hans Zimmer to score the film. Zimmer lifted his theme for True Romance from Badlands, which had memorably used a section from German composer Carl Orff’s Shulwerk, a piece called Gassenhauer.

Can you imagine? Elvis would never have so blatantly lifted someone else’s work. You’re thinking of Shia LaBeouf. Unless, uh, that is you count the King’s usurpation of popular black musical styles and dance moves to achieve a wealth and fame the originators did not?

I am sorry Lord Elvis. Please do not smite me with your vengeful wrath for insinuating your style came from somewhere other than your brain. Or for not liking Quentin Tarantino a whole heck of a lot. I can’t help it. Surely some well-meaning fanboy will school me hard in the comments anyway?

Have mercy. Don’t be cruel. Treat me like fool. And watch these films.