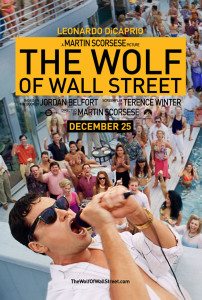 The advice you get from Jordan Belfort — Leondardo DiCaprio in Martin Scorsese’s spiritual sequel to Goodfellas, The Wolf of Wall Street — isn’t too complex.

He tells you not to take ‘no’ for an answer.

Don’t be concerned with whether what you’re selling has any value, or if anyone needs it, or if they’ll even get it after it’s paid for. Just sell the damned thing so you can move on to the next sucker.

Watching this latest slice of the Oscar-season foie gras log, I come away feeling nothing for vapid Mr. Belfort, nor for his shiny-toothed compatriot Donnie Azoff (Jonah Hill), and even less for his entourage of saps, acolytes, and accouterments, of which Belfort’s sculpted second wife Naomi (Margot Robbie) plays a representative part.

Jordan takes ‘no’ for an answer.

That’s not so important. The more pertinent question is whether I left The Wolf of Wall Street feeling anything for the world in which Belfort runs amok. Our world.

Have you noticed how this December — like every other December — presents us with a compacted globule of highly touted films, all presupposed to be awards contenders? How Hollywood shoves these cinematic steals down our throats as if we were, for example, a herd of captive geese?

‘But,’ you sputter, ‘these films are all great! How can you complain about an overabundance of riches?’

‘Ask the goose and pass the foie gras,’ I reply. 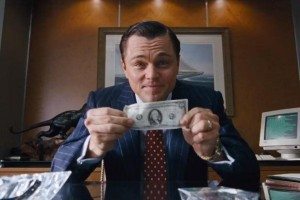 What we’re discussing here, during the Oscar crush, is the cinematic equivalent of gout, and I mean that in the best possible way. The Wolf of Wall Street is a decadently rich film from a recognized grandmaster. It is about how to sell high, pun most definitely intended.

Will you buy what the man says will enrich you with enjoyment and insight, or will you make him take ‘no’ for an answer? C’mon. Eat it up, goosey. Tastes good! It is good! 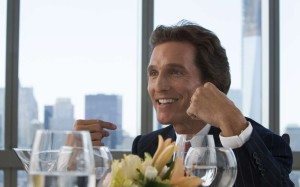 That’s what I like about money. I get older but it stays the same age.

When faced with a killer salesman — Jordan Belfort or Martin Scorsese or Leonardo DiCaprio — it takes concerted will to balk at what’s on offer.

Let’s see if we have it in us.

The film starts with Matthew McConaughey playing DiCaprio’s mentor. He drinks like the condemned, snorts coke at the luncheon table, and tells young Mr. Belfort that trading in stocks is all a fugazi. A ‘fugazi’ being a ruse; nothing but smoke and mirrors.

Brokers make money selling, not from what they sell, so sell it all and don’t stop selling. Jordan Belfort takes this lesson to heart, but McConaughey’s slippery Mark Hanna doesn’t last past Black Monday. From then on, it’s Belfort, Azoff, and an ever-growing host of total losers who manage to win. Or that’s how these characters are depicted in Terence Winter’s script. 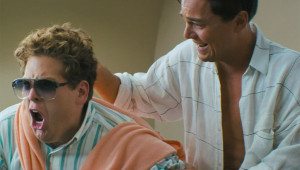 If Belfort is so hot, why are all his friends uglier and dumber than a walrus dipped in feathers?

First the good. The Wolf of Wall Street is as viscerally toothsome as you’d expect from the trailers. It is an excessive film about obscene abundance. There are long, captivating sequences within it that stand up against anything Scorsese has done in his exceptional career. Over its three-hour length, The Wolf of Wall Street pummels you with the ripe fruit of easy cash, lush sex, and abundant narcotics.

It doesn’t give you much to care about though and even less to believe.

Jordan Belfort — a real individual upon whose memoir this film is based — is as complex as tap water. He wants to be rich. He wants to be high. He wants to place his penis inside warm receptacles. These things he shall have in generous proportion. If he holds any regret for the lives he trammels on his way to wealth, they do not merit discussion. 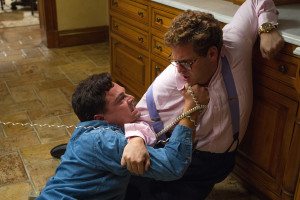 Trust me: this is the funniest, best sequence in The Wolf of Wall Street.

Instead, we get comedy.

The Wolf of Wall Street pulses with more humor than you might expect, most of it aimed at groin level. I understand that the film uses the word ‘fuck’ more than any other non-fiction film but one. It is also generously decorated with lithe, nude, female flesh.

I assume, in contrast, that when we see Jonah Hill wanking his cock, high on Quaaludes, in the middle of a party, that the dong is prosthetic. You can receive that as good or bad news as pleases you.

There is little point in relating the further story of Jordan Belfort, as there is no mystery as to where the film will go. I could say the same about the story of Henry Hill in Goodfellas, but there’s a significant difference. I was fascinated and drawn to Henry Hill. Who he was, what he wanted, and how his world corroded all were captivating. He had a soul, even if it was perverted. He had friends that mattered to him more than money. Not so Mr. Belfort. His foibles are merely foibles — hiccoughs on the path to a private yacht. There is no consequence to anyone outside of Jordan Belfort worth mentioning, save an afterthought for Donnie. 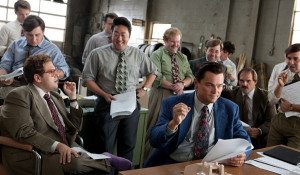 I wonder how Belfort’s friends felt about being depicted as losers. It makes me question how honest Belfort was about himself.

This brings me back to foie gras. Scorsese’s film is so decadent it’s tempting to gobble it up anyway, even if its very existence is tied to repercussion-free cruelty. Black Monday was real. Jordan Belfort is real. You can look up where he is today, should you care, and discover that he is not rotting in a cell, or buried up to the neck in worthless penny stocks while his cesspool fills with urine.

He’s still selling. He won’t take ‘no’ for an answer. This film is more than proof; it is another sales tool. 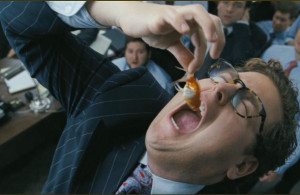 In the next scene, Michael Palin runs him over with a steamroller.

I thought The Wolf of Wall Street was hugely entertaining; DiCaprio and Hill destroying themselves on drugs makes three hours whip by; Scorsese’s unhurried bacchanal kept me alternating between clenching my teeth and recoiling in surprise and yet, I don’t know.

If we don’t act now we could miss the deal of the century and our chance at obscene wealth, but…

I suspect this deal is all smoke and mirrors. A fugazi.

7 responses on “The Wolf of Wall Street: Weekend at Bernie Madoff’s”