People get huffy so easily in this modern age. If you don’t write something uniquely charming on each and every acquaintance’s Facebook wall on their birthday; boom. You get the stink face. If you show up to your neighborhood mustache party wearing a Salvador Dali when everyone else has grown a reverse accordion with frills, it’s even worse. The humiliation is nigh unbearable. And itchy. 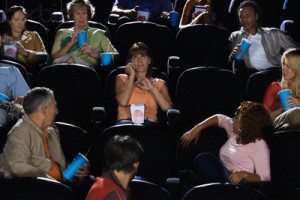 If only I’d selected the correct phone! Can’t you help me Stand By For Mind Control?

We face this same sort of awkward scenario every time we use our phones at the cinema. I cannot even tell you how often I’ve been to the movies lately only to see some misguided elderly fellow using the wrong model of smartphone during the film. Just like you wouldn’t wear white after Labor Day unless you were a nurse, a bride, or in a straight-jacket, you wouldn’t whip out the wrong sort of smartphone at the movies, would you? Doing so would be to risk your being called déclassé.

This handy guide will help you make sure you have the right phone to match each of today’s most popular films. You’re welcome. 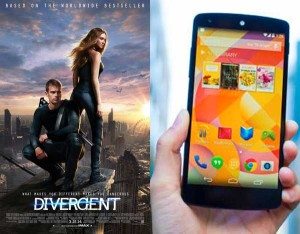 Most of the soccer moms in the audience at this young-adult, dystopian action-romance think they’re doing the right thing by sexting on their iPhone 4S. Not so. They are, in the words of their daughters, SO. EMBARRASSING.

The iPhone 4S is totally 2011. If you’re going to use a smartphone during Divergent (and you should), go with a Google Nexus 5. It’s unlocked and damn powerful, just like this film’s main character Tris. As a bonus, this smartphone’s affordability will be seen as a sly dig at star Shailene Woodley for following a bunch of indie credits with this popcorn picture. Anyone who recognizes the Nexus 5’s relatively dim screen in your darkened theater will be laughing along with you. Poor Shailene. She might as well be using an iPhone 4S! SO. EMBARRASSING! 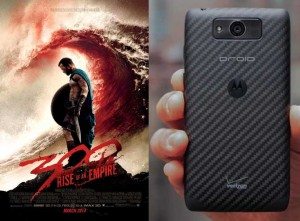 Choosing the right phone to use during 300: Rise of an Empire is no easy thing. To jibe with this film you’ll need seriously big sound and a horrifically big screen. Otherwise, no one will even notice you’ve got your phone out and are recording your own beat-box audio track in what you imagine ancient Greek to sound like.

What you want for this intense task is the Motorola Droid Maxx. This behemoth boasts a whopping 5-inch screen and cranks out a ton of sound from its back-mounted speaker with built-in BoomSound Technology. You want another reason to take it to the Maxx? This puppy is coated in Kevlar. 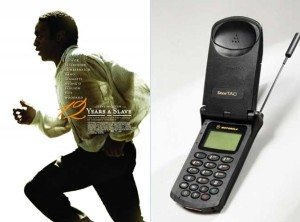 While many audience members at 12 Years a Slave—2013’s Best Picture winner—feel confident using a Sony Xperia Z1 Compact to plan their all-inclusive spa vacation during this dramatic tale of woe, I think they’re nuts. If you want to show real style, leave the Xperia at home and dust off your Motorola StarTAC. Sure, it’ll be harder to book a 2-hour shiatsu / seaweed wrap using this classic’s black & white display, but think of the statement you’ll be making when you show the theater you’re no one’s slave; You can and will make an actual phone call and talk to an actual human being. That’s right. Show the world who’s boss. Youz is.

Don’t worry; most of 12 Years a Slave is quiet enough that you’ll be able to hear the concierge describe the room specials even with the crunching of popcorn all around you. This phone is old-school and that means it can actually make a telephone call, in or out of a movie theater. 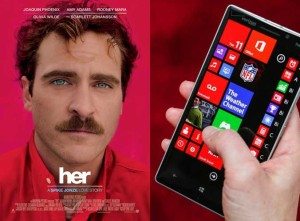 If only we could get our mitts on one of Theodore Twombly’s futuristic phone/PDA/girlfriend things! We would totally bring it—and a Scarlett Johansson OS—along to see Her. Alas, that device doesn’t exist (yet!) and Scar-Jo is preggers, so she will no longer fit comfortably in our high-waisted pants pocket. That really leaves us with only one fashion-forward choice for an appropriate PDA (in this case, natch, that stands for Public Display of Affection). We’re talking about the Nokia Lumia Icon. 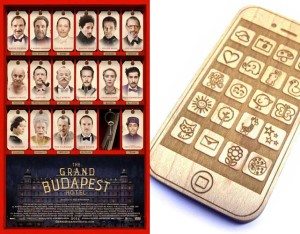 Wes Anderson’s latest is a big commitment, phone-wise. The best thing you could possibly do is bring your entire collection of phones, buy tickets for all of them, put one in each seat, and set up a conference call between them using as many different accents as you can muster.

If you can’t manage that, make your own smartphone out of dollhouse furniture, frosting, and ennui. Don’t use it, though. Just stare at it mournfully throughout the film. When The Grand Budapest Hotel ends, turn to your friends and say, “They didn’t call.” Then start whistling an old Kinks B-side and borrow your mom’s phone to call your mom. 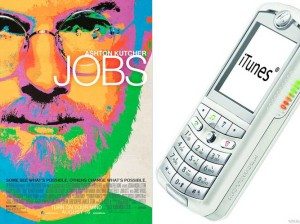 Honestly? The fact that you’re even considering bringing your iPhone 5 is gauche. That would be like wearing pants to a funeral—so tedious. No, for this real-enough story of Apple frontman Steve Jobs, you should throw down your fanboy cred hard. Dust off your Rokr E1—the first phone to come integrated with iTunes.

As you’re well aware, the Rokr holds up to 100 of your favorite songs! So get that Radiohead playlist started and meet us at the theater when its done loading. If you have to agree to 8-years of iTunes Terms & Conditions updates one by one, that’s just the price you pay to be the most stylish belle at the ball. You’ll probably be pretty late, but at least you’ll be pretty! Just call us so you know where we’re sitting. My ring tone will be this, so you’ll find us no problem. I’ll leave the volume on high.

That’s it for this month’s style guide to cinema-friendly smartphones. Hope we saved you from some blush-worthy missteps. Stay tuned for next month’s column when we find the perfect phone to match the new Errol Morris documentary about Donald Rumsfeld. (Hint: it’s a brick covered in rancid duck fat.)