Doctors are like modern day wizards, with scalpels instead of wands. They cut you up into little pieces, stitch you back together again, and fill you up with pills and potions they swear by their lord and master, Hippocrates, the ancient Greek god of large, aquatic mammals, will cure you.

There is no scarier place on earth than a hospital. Disease festers on every surface. The halls echo with screams of the dying. Depraved, sleep-deprived medical practitioners fornicate in ORs. When you enter a hospital you do so with the understanding that death is the only exit, and that when it comes, you will welcome it. Anything to escape the food. 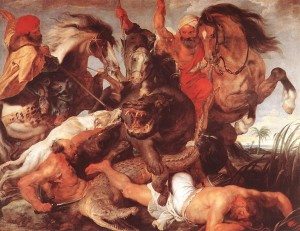 The Hippo God lays waste to all enemies

Sorry. A hospital food joke was uncalled for. In all probability your doctor already made it, that wag. Doctors think they’re hilarious. They pretend to be friendly and carefree and all-knowing, when in fact they’re half-mad egotists one step away from digging up and re-animating corpses. Deranged by their notorious perversions, they lure patients into the dungeons all hospitals are built above, there to conduct lurid sexual experiments as prescribed by their foul hippo god.

I’m not making any of this up. I know it’s all true, because I’ve seen the movies that prove it. It’s not all golf and football and cocktails like in M*A*S*H, or clown noses and floppy shoes like in that Robin Williams movie I refuse to see (he’s a clown and a doctor? Sweet Jesus above, what diabolical mind came up with that?). No sir and/or madam. Doctoring, and the study thereof (indeed, let us not forget medical students, for we shall encounter them momentarily), is nothing but madness and horror. Follow me. I’ll show you. 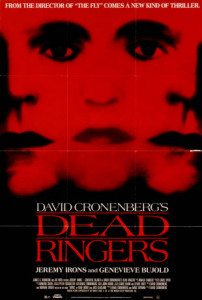 David Cronenberg’s masterpiece, Dead Ringers, stars Jeremy Irons in two roles, as twin gynecologist brothers Elliot and Beverly Mantle. It is in every way an unsettling, creepy, disturbing, all around fucked up movie. There’s not much blood or gore on display, yet compared to Cronenberg’s earlier, far more goopy movies, Dead Ringers is the one that more than any will leave you huddled up in a ball, filled with an amorphous inner dread, weeping for reasons you can’t articulate.

In one way, Dead Ringers is conceptual science fiction, the concept being, ‘What if there could be identical twins?’ Some might say, ‘But there are.’ But I’m suggesting that it’s impossible, and let’s look at them really closely. I can imagine a world where identical twins are only a concept, like mermaids…They are creatures, as exotic as The Fly…For some people the movie is a lot harder to take than The Fly, which has the shield of fantasy in front of it. Dead Ringers is too close to home. The feeling is like an aquarium, as though these are strange exotic fish creatures. That’s why I wanted their apartment to be purply and blue and sub-marine…People find it extremely disturbing. The fact that they can’t exactly say why makes it more so…I think the movie is disturbing because it’s all existential fear and terror: the evanescence of our lives and the fragility of our own mental states, and therefore the fragility of reality. 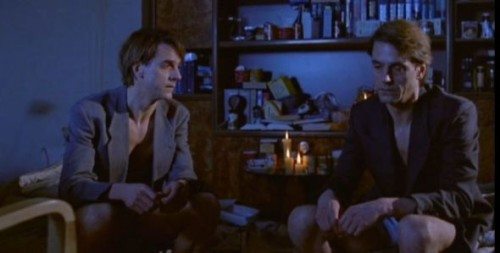 At first, the hugely successful Mantle twins are hard to tell apart. This is on purpose. They are, essentially, the same person. They share everything, including lovers. Only as the movie progresses, and Beverly begins to go insane, do the two become clearly distinct people. 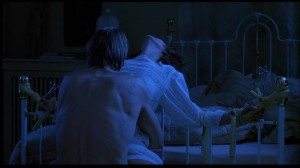 How to make love to your gynecologist

Their particular shared love interest is Claire (Geneviève Bujold). Elliot seduces her first, as he does all of their conquests, then passes her on to Beverly, who at first doesn’t reveal himself as someone other than Elliot, another normal practice of the twins. When she finds out, she is understandably upset. But she doesn’t stop seeing Beverly.

Claire’s got a drug habit. Beverly is all too happy as her doctor to prescribe everything she wants, and to start using with her. He begins to suffer delusions about mutant women, and goes so far as to design freakish gynecological instruments for operating on them. Which he then employs. 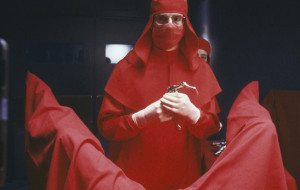 This won’t hurt a bit

Things do not improve from there. Elliot and Beverly, having grown so far apart, must reunite. They take rather extreme measures to achieve this.

At the time it was made, the techology designed to have both brothers on screen at the same time was brand new. Today this kind of thing is a breeze, with the magic of computers. Back then, great care and planning was required, along with a system to control camera movements, so that Irons could appear twice in any kind of scene, not only static ones. Fortunately, Cronenberg isn’t Scorsese; he likes long takes and subtle camera moves. It’s a style well-matched to the subject matter. As his quote above suggests, the Mantles are subjects we watch as Cronenberg dissects them. 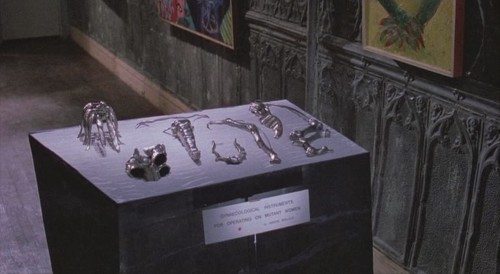 Instruments for operating on mutant women 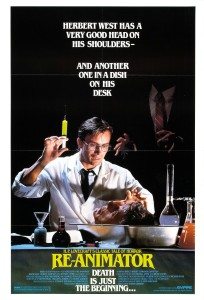 The evanescence of our lives and the fragility of our own mental states receives a somewhat different treatment in writer/director Stuart Gordon’s crazy bonkers horror classic, Re-Animator. When Gordon went about making it, he did not for a moment suspect he’d be creating a critically praised film. He hoped to please himself and horror fans. Somehow he managed to please everyone.

Everyone, that is, who finds disfigured corpses, buckets of gore, slapstick comedy, and a severed head going down on a naked woman strapped to a gurney funny. Which is you, right? Yay!

Jeffrey Combs stars as medical student Herbert West. You will of course recall his earlier medically-based performance as a razor-wielding intern in Steve Martin’s The Man With Two Brains:

In Re-Animator, Combs plays a somewhat more assured character. You might even call him—evil. Then again, maybe he’s a genius. He invents a glowing green serum that when injected into dead tissue brings it back to life. Sounds great. Problem is, the re-animated dead are not especially charming. They tend to be brain-damaged and rather upset. 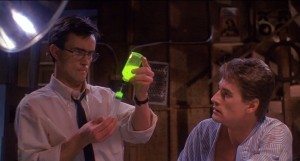 Herbert West shows off his anti-freeze.

West brings his straight-laced roommate Dan (Bruce Abbott) into his shenanigans, but alas, as often happens in situations like these, they accidentally murder the father of Dan’s girlfriend. Making lemonade from lemons, West sees this as a blessing: he can test his serum on a fresh corpse. It works! Dean Halsey (that’s right, he’s the dean of their medical school) comes back to life as a drooling, gibbering idiot. Another medical success story. 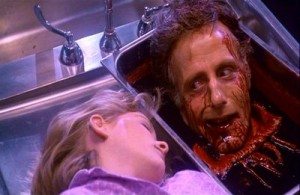 Meanwhile, Dr. Carl Hill (a gleefully nefarious David Gale), the epitome of the I-Am-A-God-Among-Mortals attitude among surgeons, discovers what West’s up to, and sets out to steal his serum. Along the way, he loses his head. Ha ha.

Barbara Crampton plays Dan’s girlfriend, over whom the severed head of Dr. Hill lusts. The finale of the movie, involving the above-mentioned sexual act, interrupted by a morgue-full of corpses wreaking havoc, is, I think, memorable. 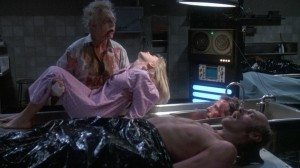 A father and his daughter, how very sweet

Re-Animator, though completely over-the-top and hilarious, is acted with utter seriousness and commitment. Which is part of what makes it work so well. Nobody is winking at the ridiculousness of it. It’s based on a short story by H.P. Lovecraft, one of his looniest. It’s a seriously funny and deranged horror movie, one of the best of the ‘80s, an era when, beginning with An American Werewolf In London in ’81, horror comedies were all the rage.

It also features a soundtrack by Richard Band that, depending on your point of view, either pays homage to or shamelessly rips off Bernard Herrmann’s Psycho score. I lean toward the latter interpretation. It’s no accident, Band’s music. Re-Animator is completely nuts. 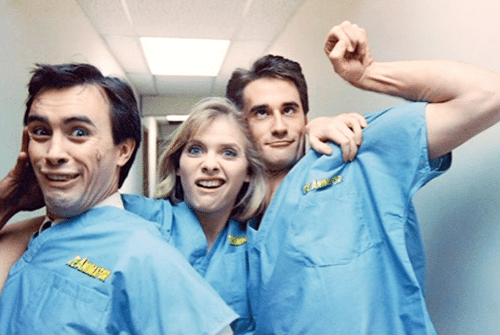