And then, after the baseball goes foof smack into the plaster right next to Rama’s head, the deaf assassin comes running down the hall, wielding her two claw hammers. She gets all ‘ka-CHUNK’ and then the bat is pinging off something hard — a skull? — but Rama gets all like ‘oh no you don’t’ and does this weird hoppy thing with his fists and then, seriously, that must have hurt. 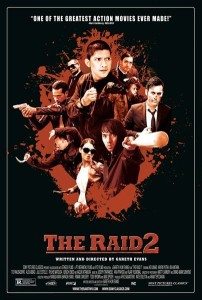 The Raid 2: Berendal goes on more or less along those lines, providing viewers with over an hour of exciting, frequently inspired martial arts action. If you caught Gareth Evans’ The Raid: Redemption in 2011, then you can picture the slick pencak silat-type fisticuffs on display here in its sequel. Here we also, thankfully, get more long takes during action scenes, which flaunt the practical nature of the combat. No stand-ins or green screens or wires; actual physical prowess instead!

If you saw the first Raid film, you may also remember the slimness of its story, which had family man cop Rama charging into a gangster fortress and then trying to escape with his life. While these events may not have been strictly logical, that didn’t matter much. The movie was exhilarating and impressive — one of my favorites of 2012.

If you’re eager for another hour of The Raid‘s sort of violent novelty — and why wouldn’t you be? — The Raid 2: Berendal is prepared to serve it up ice-cold. Unfortunately, The Raid 2: Berendal is two and a half hours long. This means that along with your delicious chopsocky you’re also getting an overly generous helping of painfully meaningless plot. 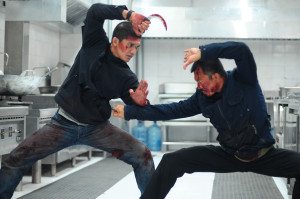 I’m pretty sure I’d just hide in the oven and wait for things to calm down. That always worked well for the gangster in Bugs Bunny cartoons.

The Raid 2: Berendal (which means ‘hooligans’, by the way; you’re welcome) begins immediately in the aftermath of the first film, opening with a character you aren’t sure you should recognize, killing someone you’re pretty sure you don’t. Then, since you’re already nicely off-balance, Evans brings the attention back to Rama and two other characters that you might recall if you watched The Raid: Redemption within the past 24-hours. Since you likely haven’t, I’ll let the filmmakers bring you back up to speed — but they won’t, so have fun waiting. 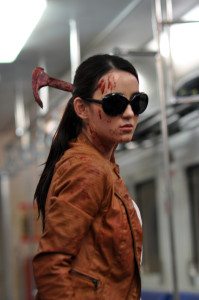 They were out of 24-inch auger bits.

Before The Raid 2: Berendal has even really gotten started, you don’t know who is being killed or why. That confusion only gets compounded by the film’s tendency to jump around in time.

The basic story, as far as it matters, has the barely surviving Rama (Iko Uwais) pressured into going undercover in gangland in order to prove police corruption and somehow thereby protect his family. There are three different underworld factions, each with their own cadre of assassins armed with garden-shed implements. Who these people are and what they want isn’t important; it is only important to follow their various machinations as a perplexed and intermittently bored observer, hoping someone starts hitting someone else soon.

Luckily, you never have to wait too long. 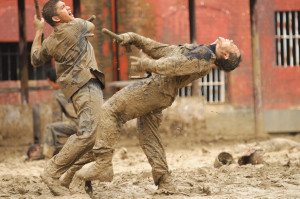 There’s some lovely muck over here.

Where in The Raid: Redemption, Rama’s motivation was compelling (i.e. try to survive), in the sequel, it’s anything but. Theoretically he’s enduring life in and out of prison for his family, but after two years, he only calls them once, briefly, to offer a weak apology and then hang up. I understand that one shouldn’t invest too much in the plot of martial arts pictures, but Gareth Evans seems to have missed that memo. There is vastly too much plot in The Raid: Berendal and none of it is worth engaging in. 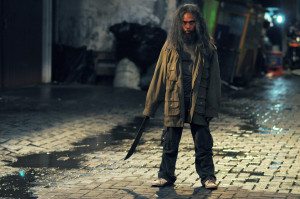 It seems directors these days feel a long action film is a wise choice, and it certainly can be; it worked for Das Boot. In this case, The Raid 2 feels grueling. It is something to be endured, rather than enjoyed. While I felt invested in Rama’s push to escape his fate in The Raid, here I began by wondering what he thought he was accomplishing and then I stopped wondering.

Some of Berendal‘s action sequences do amp up the scale of the first film nicely — the hallway attack by ‘Hammer Girl’ and ‘Baseball Bat Man’ stands out, as does a muddy (and then muddled) prison yard riot, and a car chase scene — but many of these battles just felt longer. Technically astounding, but overwrought. Some even felt pointless, mostly because I’d spent so much time with the film’s dialogue scenes I expected the fights to make sense.

Who sends a few dozen men to kill a daydreaming assassin but fails to give a single one of them a firearm?

Things of this sort aren’t a problem when you don’t have time to catch your breath. When even fight scenes start to feel monotonous, it’s time to start asking all sorts of questions. Primarily: should Gareth Evans be writing and editing these films as well as directing?

And how long until The Raid 3?