And it’s just that easy! Look around you. No, really, look around you: those so-called ‘rock stars’? Most of them are made out of mascara and spare toaster parts. Maybe four or five of them are human and of those few? Only one can actually play the instrument she’s holding. 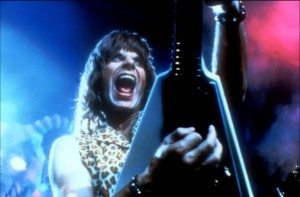 And that instrument is a laptop computer.

Nope. It isn’t difficult to be a rock god these days. All you need is a stupid haircut, tight pants, $7 billion dollars for advertising and promotion, and this paddle game.

If you’re a traditionalist though, and you feel better about showing up with a bit of talent (that they’ll just auto-tune out anyway in post), then this week’s Mind Control Double Feature will give you the goods.

What we’ve got here is a simple, two-film comprehensive lesson on everything you need to know in order to rock the socks off the world. You will watch these films and rock us sockless. And then you will collect all of our socks and make a shitload of sock puppets. 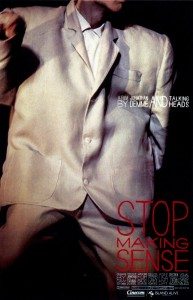 There are many concert videos out there. Some of them are excellent. Gimme Shelter, for example, will contextualize music and the ’60s and the Rolling Stones for you in a way that is both breathtaking and uncomfortable. Many other films in this genre pretty much just capture the experience of seeing a particular musical act performing live, assuming you have magical seats that whip you around the stage and you want to watch the lead guitarist go wheedle-wheedle-wheee in a sweaty close up.

Are you a Talking Heads fan? It doesn’t matter (except that if you aren’t I think a bit less of you), because Stop Making Sense isn’t about fandom. It’s about appreciation, it’s about investment, it’s about how to be a true rock god. Not some Sammy Hagar, spandex-pantsed, tongue waggling wanker, but David Byrne, the all-father of art-rock. The inverse image Ziggy Stardust that lurks within us all. 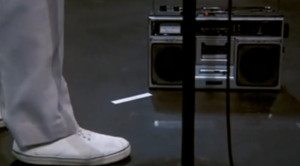 So yes. director Jonathan Demme filmed the Talking Heads — David Byrne, Tina Weymouth, Chris Frantz, and Jerry Harrison — plus supporting musicians over a three-night run at Hollywood’s Pantages Theater in 1983. These performances were edited together to create not so much a concert as a step-by-step lesson in how to burn down the house with ecstatic noise.

It begins with credits by Pablo Ferro, who also did the title sequence for Dr. Strangelove. This properly sets the mood for David Byrne to walk out onto a bare stage with a boom box. We only see his feet at first. There is no roaring audience, no panties flung, no lines of coke. A man — gangly and fine — plays acoustic guitar along to a broadcast drumbeat. The song is Psycho Killer. As he strums, he becomes more animated, evolving action from the music. The ratatat of a machine gun pulses in the drums and Byrne staggers as if wounded, as if he were in a gangster film. And maybe he is. Maybe we all are? 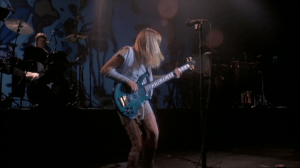 Tina Weymouth joins him on stage and the sound grows with her bass, and with backup vocals as they play the song Heaven. Then Chris Frantz comes out for the next song, and Jerry Harrison after, so that the stage — just matte black, under white lights — fills with sound, with musicians. Stop Making Sense lets you watch music be born. And what music it is! 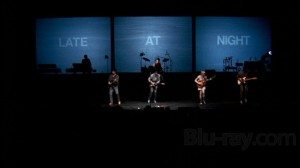 The Talking Heads play their unique strain of kinked, jerky, befunked rock and what you see is energy. The energy comes from the performers — David Byrne running in place, for example — not from tricks of light, or MTV editing, or the crowd’s antics. You barely even see that the hall is full of people; you only see the stage.

Stop Making Sense is a documentary about how to build music. It does not explain the steps required; it demonstrates them. It is assembly instructions you will likely never be able to follow, no matter what tools you posses.

Even if you don’t care for the Talking Heads, you will be hard pressed not to appreciate their artistry. I’ve shown people who dislike the Talking Heads this film and they’re still talking about it, years later.

What comes next in the film is music. The eruption of sound. The tuning of attention. A big suit.

Stop Making Sense is directed by Demme, but he sees through the eyes of David Byrne. It is Byrne’s film, his band, his performance. If you learn anything at all from him, you are well on your way to rocky godhood. Plus, lucky you, Stop Making Sense is being re-released digitally for its 30th anniversary this summer. Somehow there’s no Bay Area screening scheduled, but surely that oversight will be corrected? 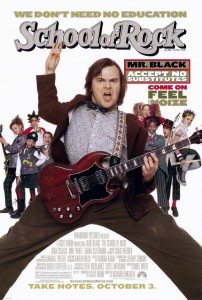 It is true that Jack Black is a little played out these days. It is also true that I included a Richard Linklater film in my last double feature suggestion. Ne’ertheless, if you wish to learn the secrets of rock n’ roll, there is only one appropriate second lesson: School of Rock.

Now you might wisely suggest that this film offers a course in Rock 101 and that Stop Making Sense is Advanced Rockology — so they should be watched in the inverse order — but I wanted you to absorb the inspiration before you started with the basics. Like the children in School of Rock, you might be a blank slate, unaware of the existence of Led Zepplin, the Doors, and Jimi Hendrix.

If so, Dewey Finn will school you.

Dewey Finn, in School of Rock, is probably Jack Black’s best performance of himself. He plays a slovenly, deluded, manchild rock musician who is booted from his lame band for being a slovenly, deluded, manchild. He lives with his henpecked buddy, Ned Schneebly (Mike White, who also wrote the script), and Ned’s domineering girlfriend Patty (Sarah Silverman in a thankless, unfortunate role). Behind on rent, Dewey is told to pay up or get out.

So he does what any driven musician would do. He assumes Ned’s identity to take a substitute teaching gig at the most prestigious prep school in the state. Then, not knowing anything about teaching or the subjects one might reasonably teach, he deludes/entices his class of 10-year-olds into forming a rock band so they can win the fast approaching Battle of the Bands contest. 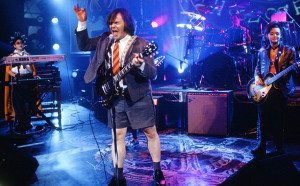 That is pretty much it. You can probably accurately guess what’s going to happen in the story just from the premise. That doesn’t make it any less enjoyable, assuming you have any tolerance left for Jack Black’s rubber-faced wangling. The kids are all great, if a bit on the undeveloped side (character-wise, not biologically). Joan Cusack has some good moments as the high-strung principal. And the music — if these kids can learn to rock in a few short weeks why certainly you can, too.

All you need is Jack Black to hijack your study, a desire for gold stars, and Richard Linklater to cast you in a film.