Imagine that you can do anything you want. I don’t mean that you discover some dramatic superpower — one of which it seems everyone is in possession of these days — but rather that you inherit complete control over a group of well-loved, well-known characters. Let’s just say, for example, that it’s the X-Men and you’re Bryan Singer. 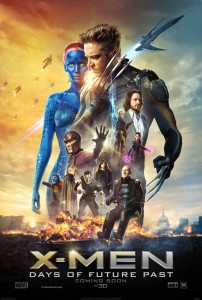 Who would you kill off first?

Who would you disclose as a secret lover of gingham undergarments?

Who would you pit against each other over the last, decent grilled cheese sandwich in creation?

Go crazy! Whatever you want to make happen — go right ahead — it’s free drama. Because X-Men: Days of Future Past begins in a future where everything sucks marmot eggs. Or at least that’s what we’re told during fifteen minutes of continuous, perplexing exposition. Massive mutant robots (huh?) can read your DNA from miles away (huh?) and are on the hunt for mutants and people who might in the future give birth to mutants (seriously?!?).

Those few plucky X-types that have survived this (off-screen) relentless and deadly assault gang together to send Wolverine (Hugh Jackman) back in time to the 1970s so he can stop Mystique (Jennifer Lawrence) from killing Bolivar Trask (Peter Dinklage) — the man who created the mutant robots and whose death kicked off this apocalyptic anti-mutant panic. 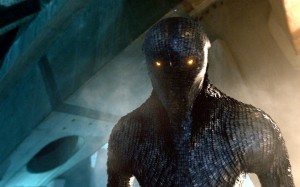 I am mutant robot. That means my DNA has… uh. Look over there! A duck!

The premise of X-Men: Days of Future Past isn’t quite as complicated as your love affair with your sister’s astral projection’s invisible friend, but it’s close. What’s more, pretty much any character that has ever been in any of the X-Men movies appears here, scrabbling for his or her sliver of screen time, including those who already died, those whom you wish had died, and those who you can’t identify despite reading the comics that Days of Future Past was based on.

Unquestionably, this is an impressive cast of actors. But what are they busy doing? They are exhibiting the fact that they have superpowers — one can make people throw up (me too!); one can pick pockets with his tongue (me too!) — and they’re reinforcing their assigned character trait despite its lack of basis within the current story. 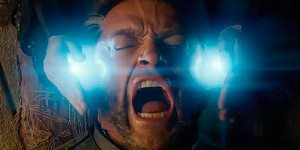 X-Men: Days of Future Past hustles along pretty fast, but speed cannot overcome a lack of vision. In the future world, where anything can happen without any lasting effect on the X-Men franchise, what happens is depressingly little. Characters you either know in advance or never properly meet fight giant robots. Eventually, at the very end of the film, immediately before the inevitable eradication of the timeline these mutants inhabit, they die. 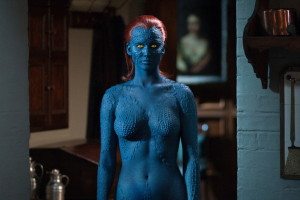 Someone needs to watch Under the Skin.

In the groovy past, what happens is similarly slim. Characters — well acted ones for the most part — tell you what they want and then go about wanting it regardless of what occurs. Mystique, for example, wants to kill Bolivar Trask despite her ‘it’s complicated’ relationship with the telepathically convincing Charles Xavier or the homicidal threat of her ‘it’s complicated’ relationship with the exhaustively powerful Magneto.

The fractious mutant future-fixers enlist the aid of Quicksilver (Evan Peters) in one of the more entertaining sequences the film delivers, but they apply a plan that only makes sense if your superpower is lack of foresight.

This is a prime example of what’s wrong with X-Men: Days of Future Past. Wolverine is told by old Magneto (Ian McKellen) and old Xavier (Patrick Stewart) that he will need both of their younger selves (Michael Fassbinder/James MacAvoy) to stop Mystique. That makes sense as long as you discount that one is a paranoid survivalist and the other has sacrificed his telepathic powers for the ability to walk. They must have forgotten about that? That’s fair enough; giant mutant robots are attacking them and this is their last chance to save the world. Tiny bit of pressure on. 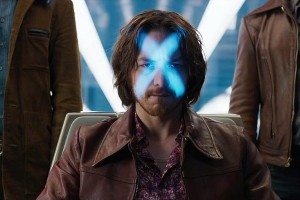 Here’s an idea, though: why not just ask Quicksilver to stop Mystique and leave Xavier and Magneto to rot? No? Okay. Worth a shot. How about sending Wolverine back in time to when Mystique and Xavier are still friends and making a sedate, convincing case against killing Trask then? No? What about averting the Holocaust so Magneto’s parents aren’t killed and he doesn’t corrupt Mystique to begin with and…

When your premise is constructed on sand, it’s hard to build to great heights. And here is where some will tell me to chill out; that this is a ‘comic book movie’ and ‘just entertainment.’ But those people have blinders on. Comic book movies are more important than anything else that’s happening in Hollywood today. If we’re going to be inundated with them at a rate of two a week, then we need to hold them to basic standards. 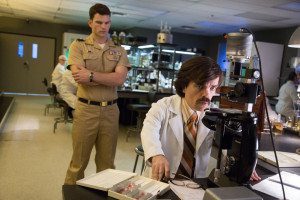 They need to have real characters who posses traits beyond owning a utility belt. They need authentic struggle against threat that’s less transparently manufactured. You know, the kind of personality-driven drama that Edgar Wright has been developing for his take on Ant Man.

What? Disney/Marvel just took the script Wright and Joe Cornish had been working on for Ant Man for years and beat it silly with the homogenous stick? Edgar Wright left the project in protest?

X-Men: Days of Future Past isn’t good, or good enough. It contains elements of quality, but no daring and less personality. It is the presidential candidate of films — attempting to be all things to all people and so succeeding in taking a stand on nothing, evincing zero honesty or insight. It is a bunch of well-produced noise. It will make no one cry, no one laugh, no one aspire, and no one think.

Ask yourself what anyone wants in X-Men: Days of Future Past and then see if you can draw a line between their desire and their actions. See if you can even draw a connection between who they are supposed to be and what they want. See if you can figure out how Quicksilver’s cassette player plays music at normal speed while he’s moving a billion times faster than normal.

Or don’t. Just enjoy X-Men: Days of Future Past and wait for the next superhero film, which is coming out soon, no matter when it is that you’re reading this.