After seeing The World’s End — the final installment in Edgar Wright’s Three Flavours: Cornetto trilogy — and mulling it over for a healthy chunk of time, there are two things I want to share with you. 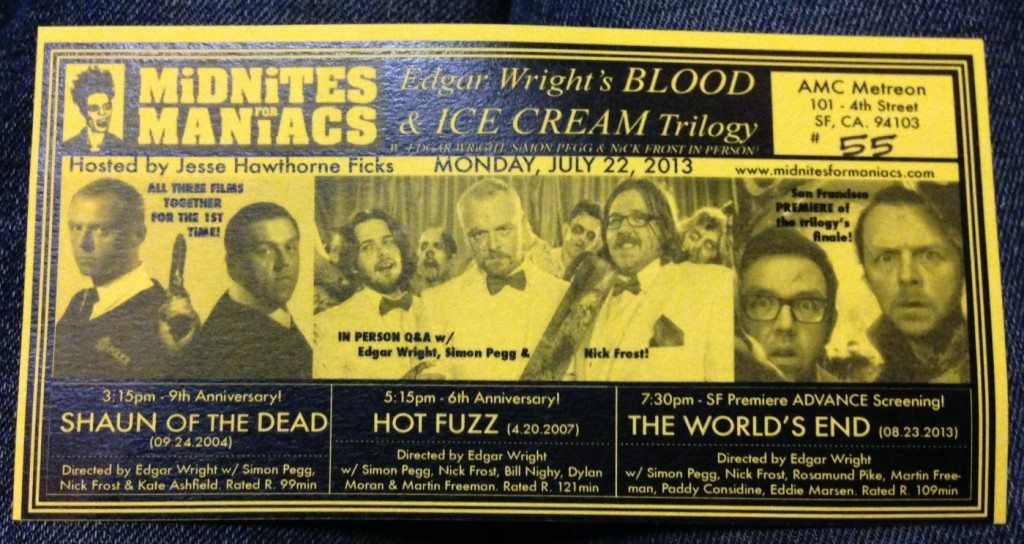 Yes. I have fired two guns whilst jumping through the air.

The first is that of the three films — the others being the satirical, hysterical, and adroit Shaun of the Dead and the even funnier, comprehensively well-judged, and deliciously wry Hot Fuzz — The World’s End is the least satisfying. Do not despair, however, for The World’s End is still leagues funnier and more engaging than most anything else that noses around cineplexes during blockbuster season.

The second thing to share is that if Edgar Wright, Simon Pegg, and Nick Frost have anything to do with what’s projected in future cinemas, things do not look nearly as dire as people have been prophesying.

Speaking to the first point, The World’s End is quite good. My enjoyment of it was far from absolute, but it left me feeling satisfied and respected. It is blessedly not a purée of standardly paced plot points intercut with flat bon mots and giant, soulless digital effects. The World’s End is instead mostly a film about people — and people you don’t recognize instantly as cardboard cutouts from other films at that. 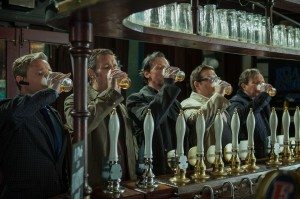 Simon Pegg stars as Gary King, an alcoholic asshole who manipulates his estranged and now sedate clique of mates from high school into joining him for another attempt at a legendary pub crawl; reliving the night of his life, as it were, as an antidote to the misery of adulthood reality.

The gang — all guys — is a well-selected who’s who of British acting talent including Nick Frost, Martin Freeman, Paddy Considine, and Eddie Marsan. Rosamund Pike holds up the feminine end as well as the script allows, which is to say not offensively, but hardly satisfyingly.

The group undertakes the pub crawl under emotional duress only to discover that something science-ficitonal has overtaken their town and that Gary King is even more of an obnoxious jerk than they remembered.

What’s grand about the film is the humor. If you appreciated or adored Shaun of the Dead and/or Hot Fuzz you will not be disappointed by the depth of the laughs in The World’s End. The film is extremely funny; perhaps even funnier than Shaun of the Dead, which gets a bit too involved in character drama towards the end to sustain its initial bullseye-level black humor.

In The World’s End, you will find yourself laughing out loud and at length from start almost until finish.

Like Shaun of the Dead, The World’s End changes tacks during the third act. Unlike Shaun however, this finale fumbles coherence and quality along with its more sophisticated humor. It has, if I’m being honest, a blue-screen of death ending. It takes the implausible but amusing action schtick of act two and slams it face first into an impenetrable barrier of endless blathering. Act one is obnoxious drinking. Act two is sci-fi blast off. Act three is a long, dull conversation with a table lamp. 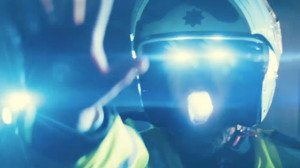 Stop or my mom will shoot

Yes. The dialogue at the end does in some way tie together the personal — and relevant — themes of the film. It does so in an almost unbelievably boring way though, like Wright and Pegg (the writers) just couldn’t figure out how to clarify their complicated message via action. It’s a shame, but not a catastrophic one. That’s partly because the denouement is followed by a Beyond Thunderdome-style coda that allows one to leave the theater with a sense of contentment, a big smile, and a willingness to see whatever these guys do next (although hopefully with some women involved this time — fingers crossed for Jessica Hynes neé Stevenson).

Like the other two entries in the Cornetto trilogy, The World’s End pokes fun at the modern world using the film industry’s own beloved tropes as ammunition. This time the target is the homogenization of culture — ‘Starbucking’ to use Wright’s term — which makes every pub and café and interaction comforting and bland. It is a film about pulling up your big boy pants and, in the face of authoritarian smothering, relishing your essential laddishness as an odd way of taking responsibility. 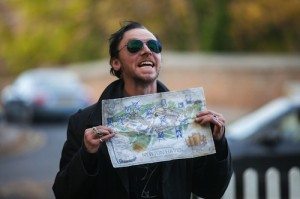 Really, though, no matter how you take what I have to say, you should see The World’s End, in the theaters, with as many people as you can drag along. My reasoning for this brings us to the second point I wish to make about The World’s End and the Wright / Pegg / Frost Cornetto trilogy.

As it was, the Supreme Being and I were lucky enough to see a Midnites for Maniacs-hosted, world first projection of the entire Cornetto trilogy with Edgar Wright, Simon Pegg, and Nick Frost in attendance. That’s a lot of movie to see in a row, with only scant breaks between films, plus the requisite two hours of standing in line beforehand. All told we spent near a dozen hours at the Metreon.

And while The World’s End may have suffered for being seen in a state of fatigue, and by following Shaun of the Dead and Hot Fuzz, it also benefitted by being seen as a chapter of a whole. The film demonstrates what actual creatives can and should do when trying to compete in today’s franchise-ravenous film market. 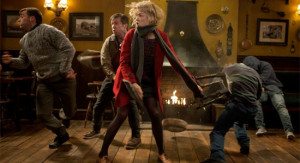 It was hard to find a photo of Rosamund Pike that didn’t feature her mostly naked.

You probably are not filled with caring about Hollywood business trends, but if you look at what’s on-screen now and what’s coming to theaters you’d be challenged to miss noticing the avalanche of tepidly conceived, franchise-focused films: The Lone Ranger, Indiana Jones and the Pathetic Marketing Opportunity, Star Wars Episode VII: Let’s Get Spiderman in There Somehow, and Disney Ride the Broadway Show the Movie.

Whether or not The World’s End is a great film (it isn’t quite), or better than the vast majority of films in theaters (it is, by any estimation), it represents a group of actual artists muscling into an oppressively commercial market to offer actual cinema fans actual cinema. People lament the death of film, but here it survives, head down, feet planted, and too drunk to say die. 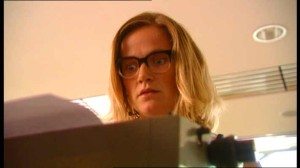 There is no established property underpinning these films except for the one they created as they wrote. There is no market primed and ready to queue up to see how a few semi-famous Brits adapted the story / game / ride / film / breakfast cereal they loved as a child. It’s people who had an original idea and who then dared to build on it so that it became a franchise, albeit a non-traditional one.

You may roll your eyes and declaim that Simon Pegg IS famous and that everyone’s waiting to see the next Edgar Wright film but, if so, you’re wrong. You missed the tanking of Wright’s Scott Pilgrim vs. the World and mistake your own good opinions of Simon Pegg as widely held. He’s Scotty in Star Trek and the star of those films that didn’t make a lot of money.

The Cornetto trilogy films are not successful in the way film studios demand their products succeed. They make a profit, but only because people like us go to the theater to see them with all our friends.

Edgar Wright is working on a Disney/Marvel Ant-Man movie now, which is as exciting as news about another superhero movie can be. I’d much rather that he and Frost and Pegg (and Hynes) got together to create another surprisingly new story instead, and one that pokes me straight in the eye with a pointy stick labeled ‘funny but uncomfortably true.’

I love the Cornetto trilogy. I love these films and what they represent, including The World’s End. This last one wasn’t my favorite but I hope you see it and laugh and help it make enough money so that we get a new trilogy. Emphasis on new.

3 responses on “The World’s End is the Wright Stuff”