As all humans have been informed, The Disney Empire is not only making an official new Star Wars trilogy (and another after that, and another after that, and…), they are also making spin-offs, single films taking place in the Star Wars universe, with the first likely to focus on a young Boba Fett, I assume because someone on the internet told them to. No doubt When Han Met Chewy will follow. Which I admit to being slightly eager to see, but only for the scene where Chewy fakes an orgasm.

We here at Mind Control, in order to assist Walt Vader in his efforts to conquer the universe, have, inspired by contributor Benson the Dog’s point that not even the official trilogy is headed in the right direction, decided to lend our massive store of freeze-dried brain-power to the task of imagining the Star Wars spin-offs Disney ought to be making.

We begin with one of the greatest tragedies ever told:

Song of The Rancor 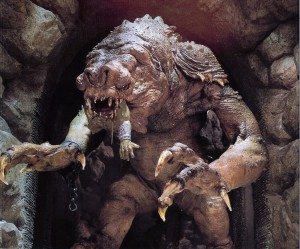 The Rancor, forced to fight

Who, having seen Return of The Jedi, can forget the Rancor? Luke Skywalker, murderous Jedi hellbent on revenge against Jabba, a humble debt-collector, for imprisoning Luke’s cheapskate friend, Han Solo, is thrown into a pit, in which the Rancor is forced to fight him to the death. Luke kills the Rancor and continues on his way, oblivious to the pain he’s caused: he has killed the one true love of Buford Bogwort*. Buford cries at the side of his dead companion. It’s the most touching moment in the entire movie.

The question on all our minds: who is this man? Who was that monster? How did they come to find themselves working for Jabba The Hutt in his desert palace on Tatooine?

Song of The Rancor tells their sad tale.

We begin on young Buford’s home planet of Spoo, where he hangs around the starport watching smugglers and businessmen carrying off Spoo’s strange native wildlife. He offers a basket of furry Frajes to one gnarled old smuggler. The smuggler won’t pay for them, but he offers Buford a baby creature from a far-away planet in exchange. The creature sings a sad song. Buford agrees. It’s a Rancor, says the captain, “friendliest animal in the galaxy, heh heh.” Buford takes it home. He names it Kevin.

His friends tease him about his lame pet. His parents worry that when it grows up it’ll eat him. Buford doesn’t care. He loves Kevin and Kevin loves Buford. Years pass.

All is not well in the galaxy. There is war between the Rebels and the Empire. Now twenty years old, Buford’s friends run off to join the Rebellion or to support the Empire. As a pacifist, Buford wants no part of any violence. He can’t leave Kevin behind while he runs off to fight a war, and an unecessary war at that. “What’s so bad about the Emperor, anyway? They’re all politicians! You think the Rebels are any different?”

“All you care about is that dumb Rancor!” says his girlfriend, Flemtensia Hornbasket. She begs Buford to join the Rebellion, but he won’t go. It kills Buford to watch Flemtensia leave him, but he has to do the right thing by Kevin. “You just wait, Buford Bogwort! Luke Skywalker’s going to fall in love with me, and then you’ll be sorry!”

Buford hitches a ride on a smuggler’s spaceship to escape being drafted by the Empire, where he’s introduced to the violent world of black-market animal smuggling. He witnesses depravities unimagined as he keeps one step ahead of the Empire. To earn his keep, he’s forced to pit Kevin against other animals in the nightly fights. Turns out Kevin, though kind and gentle when alone with Buford, is one mean bastard in a fight. He’s a Rancor, after all.

After every victory, Kevin sings his wordless song to Buford, and Buford sings it with him.

Look at what they’ve made of him

Kevin is the galaxy’s only trained Rancor. Buford and Kevin become famous—their downfall. They are attacked and abducted by a neferious circus, and forced to perform. Their act involves Kevin riding around on a tauntaun, juggling Jedi-training-orbs, some light tap-dancing, etc., all shocking because oh my god! It’s a Rancor! They’re deadly killers! Children spend the entire act screaming and sobbing they’re so terrified. It’s all Buford can do to calm Kevin down after shows.

One fateful day, a battalion of Rebels on leave from the war shows up, Flemtensia among them. Buford tries to rekindle their love, but she tells him she’s with Luke Skywalker now. They’ve having a secret affair, and she’s never been happier. “He understands my needs,” she says. “His midichlorian count is off the charts.”

At that very moment the Empire attacks. Buford and Kevin are captured while Flemtensia runs off to fight. Buford assumes she’s dead.

Buford and Kevin are sold to Jabba The Hutt. They are installed at Jabba’s palace on Tatooine. Kevin is forced to live in a pit and fight to the death anything Jabba throws at him. It’s Buford’s worst nightmare realized. 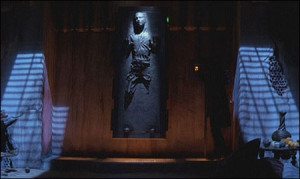 The unknown captive Buford opens up to

Buford, late at night, sits in front of Han frozen in carbonite and tells him his secret dreams, fears, and regrets, even though he has no idea who Han is. “You’re just like me,” says Buford to the slab of carbonite, “a prisoner with no escape.”

When who should burst in but Flemtensia! She’s says she’s here to save Buford, and that Luke Skywalker, her secret lover, has come to help. “But he’s been captured! Jabba’s going to make him fight the Rancor. Buford, nobody can beat the Rancor, not even the great Jedi, Luke Skywalker. You have to tell Kevin to sacrifice himself. It’s the only way. Luke will take you away from here. We can finally be together, Buford, you and me, just like we always talked about, I promise! If Luke dies, the Rebellion will lose. Darth Vader will win and the galaxy will fall into permanent darkness!” 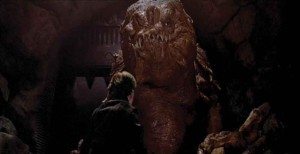 Kevin faces off against the man he must sacrifice himself to

How could Buford say no? He refused to join the Rebels when first he had the chance, instead devoting his life to Kevin. And look where it got them. He has a last beautiful scene with Kevin, explaining what has to happen, that it’s for the good of the entire galaxy. Kevin has to let Luke win. Kevin understands. Without his sacrifice, the galaxy is doomed.

The fight goes down as in Return of The Jedi, though we see it from Buford’s perspective. When Kevin gives him a last nod before allowing himself to be killed, it’s heartbreaking.  Buford cries over Kevin’s body when it’s over, then begins to sing their song.

“Wait!” cries Buford. “You can’t! Luke Skywalker is here to save me!” They shake their heads. Luke is gone. Flemtensia is gone. It was all a lie. Buford sighs.

Back against the wall of the pit, guards about to execute him, he speaks his last words to Kevin. “What’s one life matter, Kevin, when measured against the fate of a galaxy? Being a hero isn’t about getting the girl. It’s not about killing the Emperor at no personal cost to yourself or to any of those close to you. It’s about doing what’s right, even if nobody so much as knew you ever existed. Goodbye, old buddy. Goodbye.”

A tear rolls down his cheek. Cut to black. We hear Buford sing the song of the Rancor, and then—gunshots.

And there we have it! You’re welcome, Disney. 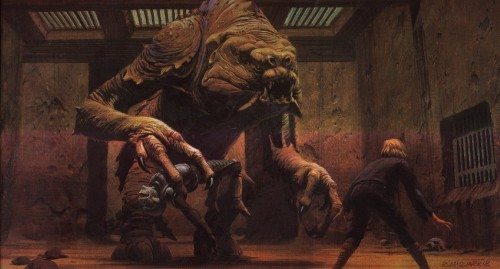 Ralph McQuarrie art for upcoming Song of The Rancor spin-off

*Sure, sure, in some “expanded” worldview of the mighty Star Wars empire, this character has a name and a history, or so claim the interwebs. But as far as I’m concerned, “canon” consists only of the movies, in which this actor isn’t even credited, let alone given a character name. So there.