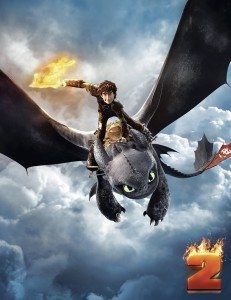 When I first saw 2010’s How to Train Your Dragon — a Dreamworks Animation production — I can’t say I was expecting too much. While I appreciate the studio’s animation style, the stories they tell infrequently capture my imagination*. Not a big deal; I’m 42 and crotchety, hardly their target audience.

Not the most imaginative title, but at least it doesn’t have a colon in it. 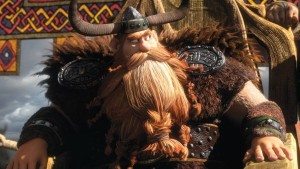 The original tells the story of a young Viking, Hiccup (Jay Baruchel), who injures then befriends a powerful, rare ‘Night Fury’ dragon. Together with ‘Toothless’, Hiccup manages to save his village, teach his chieftain father and the other Vikings not to fear dragons, and prove himself worthy of love, respect, and a prosthetic leg. In the sequel, Hiccup and his clan explore their world on dragonback only to discover grander villainy and greater danger.

It’s a sequel. What did you expect?

Perhaps an unexpected surprise? Well, there are a few of those in this film, and almost all of them pleasant. 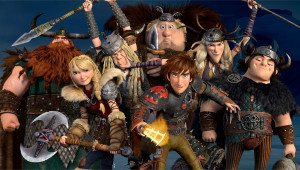 Wait. Which one are you again?

How to Train Your Dragon 2 moves at Mach 2, never wasting a second without dropping a squidge of character development, humor, exposition, or breathtaking visuals.

As it had been a few years since I’d seen the first installment, I only remembered what was going on in vague terms. The stories of the major characters all drop nicely into place, though. Hiccup and Toothless head out mapping the world in search of other Night Furies, their village of Berk whole-heartedly embraces its dragon-riding aesthetic, and Hiccup’s dad, Stoick (Gerard Butler) eagerly anticipates his son’s ascension to chiefdom. The minor characters — a raft of Hiccup’s peers, including the feisty and fetching Astrid (America Ferrera) — more contort into their respective corners than fall into place, and somewhat awkwardly at that.

Part of this was pacing. Because H2TYD2 zoomed along so quickly, my addled adult brain struggled to keep up. In general, I understood who these teens were and smirked along with their antics. As to the specifics, I felt neither up to speed nor particularly bothered by this fact. This is because — even more so than the first film — H2TYD2 looks gorgeous. Simply stunning creativity and artistry is on display in location after location. 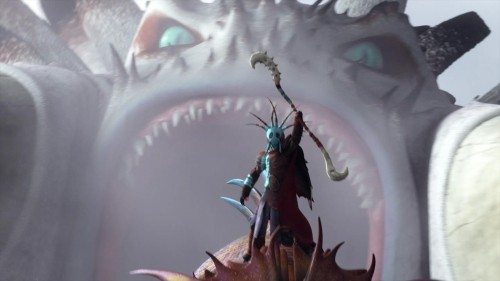 Much of which reminded me of Sergio Aragonés Groo the Wanderer comics crossed with Miyazaki and a few fever dreams. If you’re appreciative of this, the wild lands are nowhere more evident than in the art that illustrates the closing credits. Stick around and soak it up. 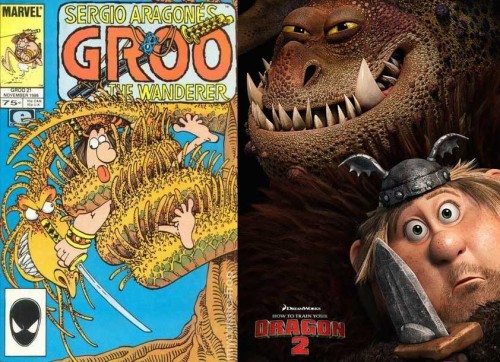 As far as the story goes, I found myself more susceptible to the loyalty on display between human and dragon than I did to the family drama; Hiccup reunites with his long-lost mother, here voiced by Cate Blanchett, from whom it appears he inherited his affinity for giant lizards. This plotline interweaves nicely, but felt a bit pat. Other characters include Djimon Hounsou as the dully evil Drago Bludvist and Kit Harrington as Eret, combination dragon-catcher and sex-object. 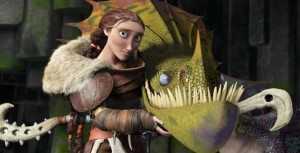 Your momma’s so dragon happy she, uh, lives with a bunch of dragons.

How to Train Your Dragon 2 lands well within the top tier of this era’s animated entertainments. Visually, I’m left only with Rango to call superior in terms of 3D computer artistry. Emotionally, however, I must admit that I found little to respond to. There is nothing wrong with the story and quite a bit right; I just remained oddly unengaged.

Maybe I’d feel differently if I was less immersed in animated scripts than I currently am, or if I was younger, or if my dog could fly and shoot electric fire from her mouth?

Please see if you can make one of those things happen. Thank you. 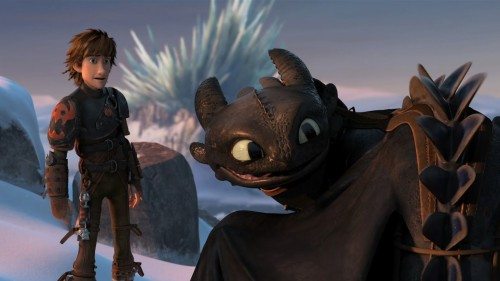 * Infrequently, but not never; Kung Fu Panda and Chicken Run are both heartily recommended.