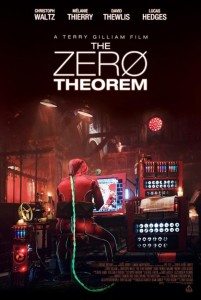 Terry Gilliam may not be the best filmmaker ever, but he’s definitely the best filmmaker occasionally. Like when he’s making Time Bandits, Brazil, or significant parts of The Fisher King. Of late, though, his output has been spotty. His unique visual sense and darkly comic sensibilities may still make it onto the screen, but in a format that feels constrained, or too unconstrained, or forced through a high-pressure nozzle. It’s as if everything he’s saying and displaying comes out disordered.

Sound and fury signifying something, but what?

In the case of his latest — The Zero Theorem starring Christoph Waltz and written by Pat Rushin — the medium is the message: somehow, provably, everything here adds up to nothing. That’s the whole point. So, in a very dissatisfying sense, Gilliam is utterly successful in his aims. 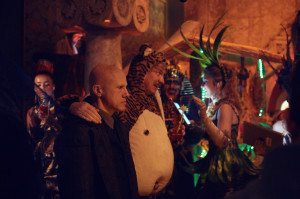 Another day at work

The story follows a societal recluse named Qohen Leth (Waltz) who ‘crunches entities’ for MANCOM, an expansive company with undefined business goals. What precisely these entities are (souls? the commoditization of people?), or what MANCOM would gain by having them crunched is up to you to decipher. Like much of Zero Theorem, these elements suggest associative meaning, but skirt anything simply defined.

Each day Qohen leaves the sanctuary of his literal sanctuary — he lives in a fire damaged church — to suffer through the chaos of the world and the workday at MANCOM. His smarmy boss, Joby (David Thewlis) indirectly connects him to ‘Management’ — Matt Damon — who gives him leave to work at home so long as he works on proving the zero theorem of the film’s title. This theorem, if you can solve it without going mad, explains how everything in the world eventually adds up to nothing — such as when the universe collapses in on itself in an anti-big-bang black hole. 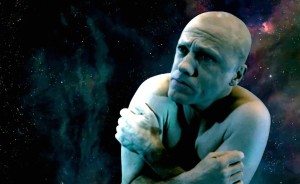 It is just such a black hole that Qohen dreams of, spending, as he does, most of his life waiting for a mysterious phone call which will clarify the meaning of his existence. Without which, what’s the point? Everything means nothing. According to Management, who’s always watching, if you can suss that symbolism. 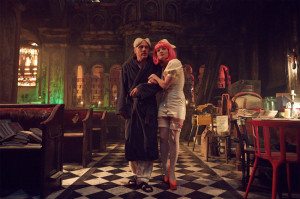 Like many previous — and more potent — Terry Gilliam films, Zero Theorem is wall to wall with innovative conceptions of the future, anachronistic steampunk odds and ends, and dreamy color and movement. Characters ooze character. Qohen, for example, refers to himself in the third person; he lets a match burn to his fingers to see if he minds if it hurts (he does); he rejects contact — physical and emotional. But all these elements do not leave one with a sense of knowing or understanding him.

What Qohen wants — meaning — is the corollary of the zero theorem. If everything equals nothing than, through the symmetric property, nothing must also equal everything. Qohen’s existential void is all there is. It is a bleak view of the world — one that is made no less depressing by the fact that I agree with it. In Brazil, Sam Lowry’s escape into madness is shocking. Not so here. 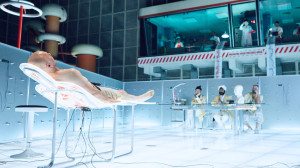 Qohen Leth’s path through The Zero Theorem is one Gilliam has called tragic. He’s right, but perhaps not for the reasons the director intended.

Like in Brazil, Gilliam here constructs a dystopia of arch insights. At MANCOM the electronic displays reveal, among other things, that ‘Arbeit Macht Frei.’ The advertisements follow you down the street like pleading urchins. Each step towards creation and order is matched by huge reversals of entropy. The magical phone call Qohen waits for isn’t coming. It can’t come. Meaning is fantasy. 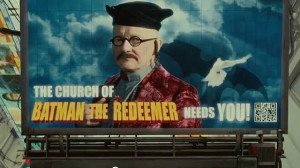 In the end I find that The Zero Theorem feels like the end of the argument posed in Brazil and advanced in 12 Monkeys. Our attempts to create meaning, to find beauty, to save ourselves — they are futile. Alas, it feels like the sort of argument’s end that you get well after everyone is tired of talking, full of strong wine, and beginning to slur.

As a final image — after Qohen manages what passes for tragic escape — The Zero Theorem shows us a glimpse of god. Or at least the god that might create a world in which everything adds up to nothing. It is a massive crucifix with a surveillance camera for a head.

Who’s watching? You are, of course. We are Management for as long as we listen and watch and try to make sense of our awareness.

The Zero Theorem may be one of Gilliam’s lesser successes, but it’s built on something, towards something — and that’s clearly better than nothing.

3 responses on “The Zero Theorem: Everything Adds Up to Nothing”