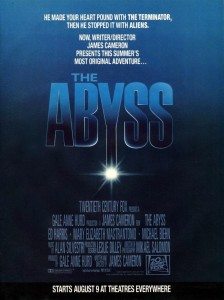 James Cameron’s The Abyss — released in 1989 — does the same thing to its audience that it does to its characters. Namely, it drops them down a dangerously deep hole, half drowns them with cubic miles of seawater, and then attempts to raise them back up to the sunny surface without any interval for the nitrogen bubbles in their blood to escape.

Watching this movie should put you in the hospital.

It is this film, more than Cameron’s The Terminator or Aliens, that presages his current (terrible) work. So you should watch it and then check into the hospital, or at least spend a few weeks in a decompression chamber trying to recover. Or maybe a de-comprehension chamber would be better? Such a device should exist, if only to save us following films such as this.

The Abyss, like Titanic and Avatar, pours on the spectacle, amps up the danger, and hopes you won’t notice that the story never evolved past the conceptual stage. Frankly, it’s stupid — both the movie and the method.

At the beginning of The Abyss, an American nuclear submarine encounters something weird and crashes into a subsea mountain. The Navy, afeared those dang Soviets will get their commie hands on the missiles, co-opts an underwater drilling platform run by Virgil ‘Bud’ Brigman (Ed Harris) and a motley crew of good ol’ boys and girls. Bud’s estranged wife, Dr. Lindsay Brigman (Mary Elizabeth Mastrantonio) and a passel of SEALs — namely Michael Biehn as Coffey — descend to the deep-sea location to overreact, snarl, and manufacture drama.

Enjoy it, because this is the best part of The Abyss. As we submerge into the Cayman Trough with the lovable blue-collar lugs who operate the ‘Deep Core’ platform, we watch them do as characters trying to establish themselves will do. One has a pet rat and is known as ‘Hippie,’ for example. At this point in the movie, that passes for character. The weight of the water above, too, isn’t suffocating; it’s thrilling. Then a hurricane moves in and the SEALs convince the crew to attempt a dangerous recon dive as Bud and Lindsay bicker. That sounds like a full contingent of elements necessary for an excellent adventure story.

Watch them settle onto the sea floor for your casual inspection and delectation before they’re obscured by darkness and silt.

During the film’s first act, you have the space to believe in and care about Ed Harris’ and Mary Elizabeth Mastrantonio’s characters. Their marital strife — while sure to be mended by the end — is a lot more intriguing than whatever mysterious thing has sunk the submarine.

I wonder? Could it be some sort of alien intelligence that will teach us all a lesson about non-violence?

Perhaps, but it’s hard to say because whatever these alien things are, they’re shy. They photobomb the at-odds crew, but there is no communication, no character, no information about them.

For a long time (and this is a long film, at either 140 or 170 minutes, depending on whether or not you’re a sucker for the ‘Special Edition’) The Abyss does manage to keep things going with rollicking good adventure scenes — mostly featuring Harris, Mastrantonio, and Biehn. Cameron may have no idea how humans operate, but he does understand action beats better than almost anyone else alive. The sub is located, characters freak out and have near-fatal dive accidents, and the hurricane wallops in — disconnecting the Deep Core from its supply ship, wrecking the joint, putting the lives of everyone below at serious risk, and forcing us to watch Chris Elliot try to act.

Then, like a disaster, the film gets weighed down by atmospheres of pressure. The story fractures under the assault of watery ideas. Are we watching a movie about soldiers, or aliens, or survival? While most people about to die alongside the Cayman Trough would be concerned about things including air and warmth and dry undergarments, The Abyss allows the SEALs to fixate on Soviets and nuclear weapons — this illogicality is explained away because Coffey suffers from the atmospheric high-pressure he’s under, which makes him tremble and act insanely, as opposed to the emotional high-pressure he’s under, which should make him want to live or have sex one last time or something. The other SEALs follow orders more or less and try to detonate a warhead so they can massacre whatever vague alien-esque things the special effects team can manage.

While this forced drama plays out through hand-to-hand combat and sub races, characters swim around in and out of dive gear at 500 meters below sea level; the spear of destiny from Donnie Darko (and okay, fine, The Abyss came first) sticks its weird watery beak into the Deep Core; and the film attempts to transition from one movie into something completely different with no transition.

The Abyss may have one of the worst endings ever filmed.

Bud goes on a suicide run to disarm the warhead, which has been sent down into the Trough for the dumbest reasons imaginable. There, after two and a half hours of watching people struggle through claustrophobic, water-logged scenes, the aliens come out to say hi. What do they do? They attempt to translate the intimate, subjective travails of the film’s characters to a global scale.

It makes for explosive decompression. Everyone in the film, everyone watching the film should be dead. It’s a medical fact.

The aliens save Bud, threaten to destroy the terrestrial world with giant waves (in the Special Edition), but are moved by Bud’s sacrifice and his love for Lindsay to spare humanity, disperse a hurricane, save Bud, and expose themselves to the hordes of humanity by floating their ship/city up directly beneath a flotilla of warships — all seemingly on a whim. Luckily for Lindsay and the gang, the aliens also manage to snag the Deep Core on their way up and safely decompress everyone on board.

Are you ready for a nice long visit to the de-comprehension chamber?

Not only does this ending make no logical sense on a small or large scale, it makes no story sense. We have spent too long in a compact space, dealing with intimate problems of personality to end with aliens saving the world for reasons one struggles to understand or care about.

The aliens aren’t characters; they aren’t even properly explained. They are just vague creatures of water and light that live somewhere out of reach. As touching as it may be to suggest that they’d be moved by Bud’s love for Lindsay, it would make as much sense to suggest they were touched by Hippie’s love for his pet rat. It is an extravagant, deus ex machina ending that has nothing to do with the stresses and dramas of the film’s characters.

It is the equivalent of ‘and it was all a dream!’

It’s too bad, really, because Cameron developed some amazing effects for this film. He put his cast and crew through hell filming most of the thing underwater. And Ed Harris — a damn fine actor — does a damn fine job.

But he doesn’t save The Abyss from being abysmal.

5 responses on “Is The Abyss Abysmal?”