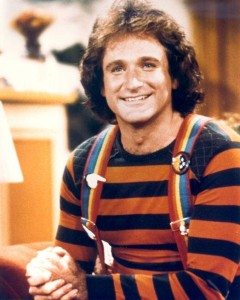 Like any movie/television obsessed seven-year-old, I first noticed Robin Williams as the alien Mork. I’m not sure if I saw Mork on Happy Days or not, but I watched Mork & Mindy obsessively. I liked aliens. Especially funny ones. This was clearly the best show of all time, or so my little kid brain thought.

Then came Robert Altman’s Popeye (’80), which I desperately wanted to like, but something about it failed to connect. I wasn’t alone. Popeye did decent business, but it was one of those classic Hollywood stories whereby despite being profitable, it wasn’t as profitable as projected, and thus it was labelled—and remembered as—a bomb. Mork & Mindy was still hot, though, so Williams wasn’t fazed.

He had his standup, too, which I can’t even begin to describe. I saw his comedy special An Evening With Robin Williams in ’82, I think I must have videotaped it off TV, because I watched it over and over again. Not too long ago I rented it, curious to see what Williams was like so long ago. He was insane! I mean even without what must have been the truckloads of coke he was doing, the guy was unhinged. Unhinged and incredibly peppy. His comedy was never cynical. He was like a kid. The world amazed him. 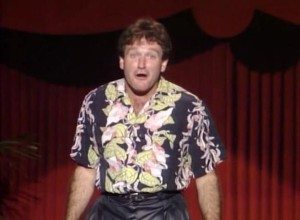 An Evening With a man in leather pants

What’s so weird is that he doesn’t really tell any jokes. He riffs. He riffs on people in the audience, on the building, on himself, and then he riffs on the riffs, and the whole time he’s bouncing around the stage like a rubber ball. I’m pretty sure I didn’t laugh much watching it recently. But I was certainly captivated. I’ve never seen anyone do standup like that. I guess no one else had either, hence his massive stardom.

I saw him perform once, I think in Marin, at an outdoor venue, I can’t remember when, it must have been ‘86ish, let’s say, because he had this totally bizarre musical act open for him, this dude who made crazy sound effects while singing, Bobby McFerrin, who no one had heard of, “Don’t Worry, Be Happy” having yet to be recorded. Williams was a huge fan and wanted to spread the word. I don’t recall a damn thing about Williams’s set. I just remember being thrilled to be seeing him. 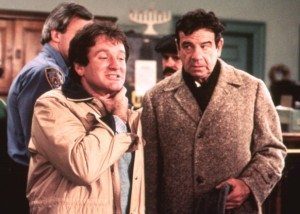 I seem not to recall this scene. Nor any other.

Williams’s next movie wasn’t a comedy. It was The World According To Garp (’82). I loved it. Williams was great as T.S., its humor was dark, there was a naked girl in it, and John Lithgow was wonderful. Garp was an early life-lesson in why R rated movies were the best. How did I get into this one at age 11? I have no idea. I blame my parents.

His next movie was everyone’s favorite—The Survivors (’83). Surely you remember The Survivors? With a crusty old Walter Matthau? A pairing made in comedy heaven! Or so I and nobody else on Earth thought. I even had a poster for it on my wall. 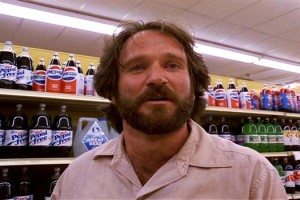 Lost in the supermarket

Next, another relatively serious role in Paul Mazursky’s Moscow On The Hudson (’84). Which I also loved. I haven’t seen it since. I haven’t seen The Survivors since, either. Probably for the best. Then again, Moscow On The Hudson was well received. Maybe it’s an overlooked ‘80s gem? The only scene that comes to mind is Williams in a supermarket, overwhelmed at the number of cereal varieties he has to choose between. Or was it coffee brands? Either way, this was ’84, the Cold War was raging, and all we knew of the Soviet Union in the U.S. was that they waited in twenty hour lines for loaves of bread. Imagine a Russian seeing a supermarket! They’d lose their shit! Or so we all believed.

And here ends my walk through Robin Williams’s filmography. Other films and actors began to more thoroughly distract me in those days, and Williams’s choices were often not to my liking. I enjoyed Good Morning Vietnam, and it was fun to see his floating head in The Adventures of Baron Munchausen. Not until The Fisher King in ’91 did he really strike a chord with me again. That’s a movie I’m going to need to watch again. Williams brought everything he had to the role: humor, sadness, wisdom, and pain. 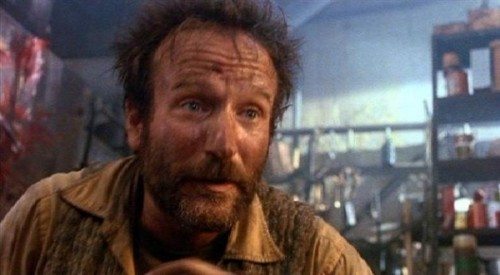 Williams as Parry in The Fisher King

What with all of his goofy, Mrs. Doubtfire-esque roles, and his manic, wacky public persona, Williams has always been perceived as a comedian first and foremost, yet looking through his film credits, his best roles are all serious, or at any rate not purely comedic. Ask anyone to name their favorite Williams movie, and you’re likely to hear a lot of Fisher King, Dead Poets Society, and Good Will Hunting. You will likely not be hearing Bicentennial Man, Flubber, and Club Paradise. 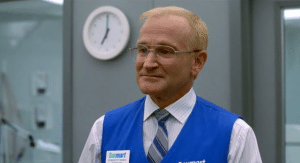 Williams had unusual power playing men in pain who mask their suffering with humor. Or who don’t mask it and just suffer. Two roles, both from ’02, stand out in this regard, One Hour Photo and Insomnia, in which Williams plays two characters not likely to smile, let alone crack a joke. But no matter the role, he imbued every character with warmth. There was this kind of raw emotion to his non-comedy roles. In a way, I think his purely manic roles, and his cheesier, family friendly roles, tended to obscure the kind of acting he was best at. Maybe getting in touch with the kind of emotional intensity those darker roles required wasn’t something he was up for often. Or else he just wasn’t offered those roles enough.

And now he’s up and killed himself. He was never shy in discussing his drug and alcohol addiction, his troubles with depression, his general uhappiness, it’s just he always did it while cracking jokes in loopy voices, smiling and exuding warmth, leaving one with the impression that however hard he had it, he had the strength to pull through.

I’d not paid much attention to Williams for a long time (though it was nice to see him in Louie‘s third season). I think it’s because he’s always been here, ever since I was a little kid. I’m terribly sad to hear he’s gone. I’m sure he had any number of dopey movies left in him, but no doubt among those would’ve been one (or more!) of those late in life roles actors like him always seem to surprise us with. 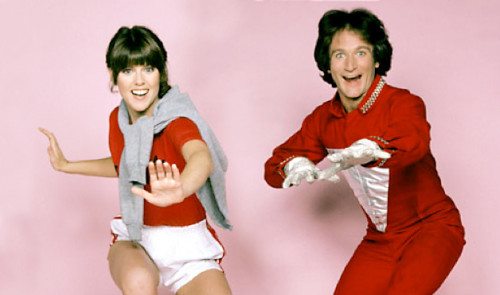 One response on “Memories Of Robin Williams”