Few filmmakers can be said to be as prolific and influential as George Romero. An icon of the zombie film genre, Romero’s love of horror traces back to his youth, when he first saw classic monster films such as Frankenstein and Dracula. Romero’s love of these films set him on a path to not only create horror films himself, but to change and redefine the genre for decades to come. 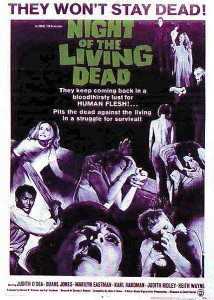 Romero’s first foray into the zombie film genre was 1968’s Night of the Living Dead. While a spectacular film in and of itself, Night of the Living Dead introduced the world to the modern zombie, and standardized the way that zombie films would be told from then on. And while Romero would go on to direct several other installments of the series, including Dawn of the Dead(1978) and Day of the Dead (1985), no film ever truly surpassed Night.

Set in a farmhouse, the film depicts a small group of survivors fending off hordes of the reanimated dead. Prior to Romero’s take on zombies, Hollywood films depicted zombies as pale-faced minions of voodoo sorcerers. Romero’s zombies were something else entirely. While they remained reanimated corpses like their classic counterparts, Romero’s zombies were no longer faceless emissaries of witchcraft, but they could be anyone, even a person’s neighbor or loved one. Romero’s zombies also had only one goal: to feed off the flesh of the living. Furthermore, Romero’s zombies initiated the idea that zombies walked in slow, shuffling movements and could only be killed by destroying their brains, usually by shooting one in the head.

While Night of the Living Dead vastly changed how the world looked at zombies, for Romero, the stars of the film, and indeed the primary antagonists, were always the human characters and how they interact with one another. This point is particularly stressed in that Night of the Living Dead star Duane Jones was more concerned about how the public would feel that he, as an African American, hit a white woman in a moment of extreme drama in the film, rather than the horror or gore that the film recounted. 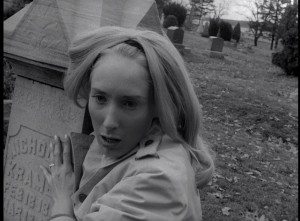 They’re coming for you Barbara

The film begins with a brother and sister visiting the grave stone of a dead relative. While there, they are accosted by a zombie in the graveyard. One of the best parts of the film, is that the brother is taunting his sister before the audience learns that the man poses an actual threat. It’s a clever self-reflexive moment, where the character suggests that their scenario is reminiscent of a horror film, and then it turns out..they are in a horror film.

Another thing that’s great about the film is that it places so much emphasis on mass media. Partially on media sensationalism (which would have been a huge issue in the United States during the Vietnam war, with families tuning in nightly to see authentic blood and gore on screen). But beyond media sensationalism, it speaks to the degree humanity was coming to rely upon television. It provides a nice narrative device, also, in that so much of what we (the viewer) learn about the zombie pandemic, we learn through faux media broadcasts. This is a device used in other horror movies from around that time (notably The Texas Chainsaw Massacre [1974]). 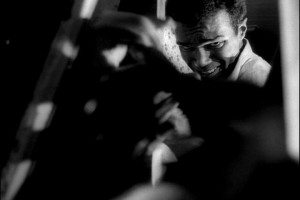 Another noteworthy fact about the film is that it featured an African-American (Duane Jones) actor in the lead role at the height of the civil rights movement. Part of what is great about Romero is that he had reportedly selected Jones, not because he was black, but because he felt he was the most competent actor for the part. Romero introduced issues of racism into the film, whether he intended to or not, and he couldn’t have picked a more politically charged time to make that move, considering the fact that Martin Luther King Jr. was assassinated around the time of the film’s release, and black-liberation activist Malcolm X had been slain only three years earlier.

The film has also opened up interesting conversations about gender equality. Some of the women in the film are shown as being catatonic, ineffectual, and entirely dependent upon men in the face of this crisis. Some have suggested that the film’s depiction of this character is misogynistic. Some feminists, however, have taken a totally different stance, suggesting that the film depicts the consequences of patriarchal society, wherein women are conditioned to feel like they are entirely dependent upon men to respond to crisis situations. 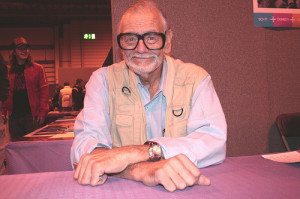 But political subtext aside, the film is also notable for being the first to graphically depict a zombie banquet. The later Dead films were immeasurably more gruesome. But there’s something quite amazing about the black and white footage of the zombies dining on human flesh.

It’s been interpreted a variety of ways, and it has spawned countless imitators. It even saw it’s own remake in 1990 (which was directed by special effects guru Tom Savini), which was fairly successful at contemporizing the story, and that film itself has become an extremely popular viewing option on streaming sites (more info here). Night of the Living Dead would remain one of the most harrowing horror films of all time, and it would be another 10 years before Romero returned with a sequel…

But that, friends, is another story for another blogpost! Stay tuned for chapter #2 of Brain Food, which will look at Romero’s infamous Dawn of the Dead…

Brandon Engel is a vintage-horror obsessed Chicagoan who regularly attends conventions and screenings. Among his favorites are The Creature from the Black Lagoon and The Texas Chainsaw Massacre. Follow him on Twitter: @BrandonEngel2.