Our weekly suggestions of perfectly paired films have been on hiatus, but now we’re back. And we’re going to mess you up like a little girl with a big chip on her shoulder. 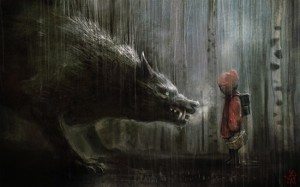 Like, say, Shirley Temple on the good ship let’s-see-how-far-up-we-can-shove-that-lollypop.

How you like them apples? In a basket? Delivered to grandma’s house? Well get them your own damn self. We’re too busy cutting the big bad wolf a new asshole. With our teeth.

Let’s just take a look at this week’s Mind Control Double Feature, which focuses on what Little Red Riding Hood might be like if she was born today and her mom was Courtney Love. 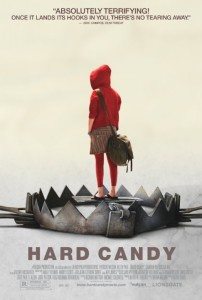 Director David Slade hasn’t rocked my world much. His 30 Days of Night left little impression and I somehow missed seeing any of the Twilight films, including his installment, Eclipse. The man did direct a solid Breaking Bad episode, though, so he must be some kind of freakin’ super genius.

And he made Hard Candy, which is ugly with a capital ‘P’ — which stands for punishment. Capital punishment. Get it?

I’m just kidding. We won’t kill you. Or at least not on purpose.

Hard Candy is a small film, the kind of movie you’d have a hard time getting anyone sane to fund. Mostly two characters in one location. You’ve got Ellen Page as a believably 14-year old girl named Hayley. Hayley reels in 30-something photographer Jeff (Patrick Wilson) for flirtatious chatrooming, a face-to-face slice of cake, and then — when she pushes for it — an unchaperoned return to his house.

From the start, there’s something wrong and it’s hard not to see it coming. That doesn’t make Hard Candy any less interesting. Instead of the same tired tale of creepy predator absconding with cute young thing, screenwriter Brian Nelson gives us the inverse — and it’s exponentially more engaging. As you’ve guessed, Hayley is no naif; she’s the huntress and her bow is aimed right at your balls.

Made for about a million, Hard Candy clamps down hard on the interplay between Page and Wilson as Hayley gains the upper hand on the letch. She then proceeds to tighten the screws, aiming for his confession of pedophilia and perhaps worse. While it’s quite clear the photographer is a creep and more obvious that Hayley is no skittish fawn, what’s less clear is if she’ll actually surgically remove his testicles. And if doing so would be justice served.

Hard Candy is, to be frank, a bit of a hard watch. I would not suggest screening it with Teeth, unless you’re trying to cut back on your hours asleep. The film is, however, engrossing, crispy shot, and marvelously acted. Ellen Page was about 18 when the film rolled, not yet known as Kitty Pryde in X-Men, and she’s pretty perfect.

If you’ve ever been afraid of a kid who thinks they know better: ka-bang. What big precocious presumption you have, my dear. I wonder if you’re right about nasty old Jeff?

According to the filmmakers, having Hayley appear in a red hoodie was a lucky turn of events and not part of the plan. I hope that’s not true as it would evidence a lack of awareness on their part. Hardy Candy is clearly an alternate angle on Little Red Riding Hood and that’s part of what makes it awesome.

While you may see what’s coming from the get-go, you’re a lot less likely to feel complacent by its close. In that way, Hard Candy is like David Mamet’s Oleanna: the perfect film to not see on a date. 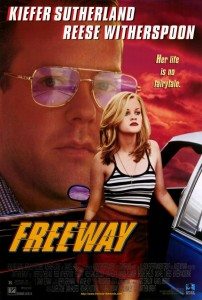 A decade before Hard Candy, and long before Reese Witherspoon was Legally Blonde, there was another film that took a stab at Lil’ Red. Writer/director Matthew Bright’s Freeway is, by any definition, a seriously weird film.

For starters, it’s got Brooke Shields in it.

Then, it’s so clearly working the modern-Little Red Riding Hood angle that its lead character, Vanessa Lutz (Witherspoon), carries a basket and is off to grandma’s. Of course Vanessa is also illiterate, sleeping with her stepdad, armed, and under the care of Amanda Plummer — or at least a junkie prostitute played by Plummer, with all of Plummer’s high-pitched, strung-out excellence.

Anyway, everyone dies. Because it’s a comedy. 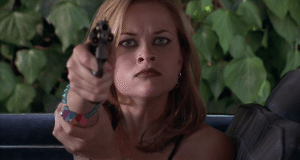 Wait. I’m getting ahead of myself. First, poor Vanessa finds both of her messed up guardians rounded up by the cops. Then she hits the road (with her basket) to seek refuge with the grandma she never met. On the way, she is ‘lucky’ enough to be picked up by Bob (Kiefer Sutherland), who will this evening be slavering through the role of the big bad wolf.

In Freeway, Vanessa is no precious peach. She’s got a homemade shiv hidden in her cooch and a temper that would make hulk smash. Sutherland plays his part as subtly as jalapeño eyedrops, but he looks good after Vanessa shoots him in the face.

The film is, on the whole, a head-scratcher. Clearly Bright wanted to invert the Riding Hood paradigm — like Hard Candy — but he hews oddly close to the fairy tale while he veers away wildly. He also seems fairly muddled when it comes to figuring out what he’s trying impart. 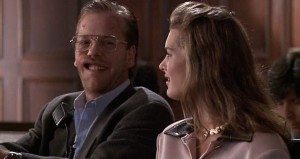 Are we meant to relate to Vanessa’s violent response to society? Is predation something that should be met with equal force? Is this movie funny? Is it supposed to be?

I can’t answer these questions for you. I can tell you that when I first saw Freeway, when it came out, I thought it was crazy and interesting. Upon second viewing, I see what I appreciated about it, but I also see so many bizarre writing and directorial choices that I’m flummoxed.

Who gets Syndey Lassick to be in their film and then only has him deliver a single line about a borrowed extension cord?

Is this the girl that shot you?

On the brighter side, Freeway features the always excellent Dan Hedaya and a disturbingly young and disturbingly disturbed Brittany Murphy.

So gather up your basket. Head off down the path to grandma’s house. And don’t forget to complement her big eyes or she might mace you. With a mace.