Last night Robin Williams died of depression. He was only 63, but for much of his life, like Mork from Ork, he seemingly grew younger. 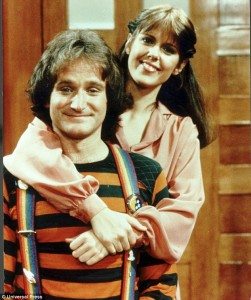 I grew up laughing to Robin Williams, but it is only now that it’s too late that I realize how much of what I appreciated about the man was his pathos. Yes. He was hysterical in his chemically-induced early days and even often enough in his kid-friendly later years. While I wasn’t a fan of his Mrs. Doubtfire stuff, and long ago stopped seeing his family comedies, I never stopped thinking of him as primarily a comedian.

That’s crazy. Most of his oeuvre was material that made me feel. When his characters made me laugh, it was with present pain. Popeye. Good Morning Vietnam. Even the treacly Dead Poets Society. These are films that worked or didn’t despite Robin Williams’ impressive authenticity. He brought himself to his roles, not in a typecast fashion, but in a genuine expression of the dark comedy that rules the world.

Or at least his world and mine.

He took the pain he felt around him and, with comedy, transmuted that angst into active energy.

When I think of Robin Williams, it will always be as Parry in The Fisher King. In that role, in Terry Gilliam’s skin-graft of a film, Williams plays a man submerged by great trauma. He is funny, yes, but also frightening in his rawness.

It begins with the king as a boy, having to spend the night alone in the forest to prove his courage so he can become king.

Now while he is spending the night alone, he’s visited by a sacred vision. Out of the fire appears the holy grail, symbol of God’s divine grace. And a voice said to the boy, “You shall be keeper of the grail so that it may heal the hearts of men.” But the boy was blinded by greater visions of a life filled with power and glory and beauty. And in this state of radical amazement he felt for a brief moment not like a boy, but invincible, like God, so he reached into the fire to take the grail, and the grail vanished, leaving him with his hand in the fire to be terribly wounded.

Now as this boy grew older, his wound grew deeper. Until one day, life for him lost its reason. He had no faith in any man, not even himself. He couldn’t love or feel loved. He was sick with experience. He began to die.

One day a fool wandered into the castle and found the king alone. And being a fool, he was simple minded, he didn’t see a king. He only saw a man alone and in pain. And he asked the king, “What ails you friend?” The king replied, “I’m thirsty. I need some water to cool my throat”. So the fool took a cup from beside his bed, filled it with water and handed it to the king. As the king began to drink, he realized his wound was healed. He looked in his hands and there was the holy grail, that which he sought all of his life. And he turned to the fool and said with amazement, “How can you find that which my brightest and bravest could not?”

And the fool replied, “I don’t know. I only knew that you were thirsty.”

How could we not know that Robin Williams was so thirsty?

Looking at his career, he brings so much suffering to so many tortured characters. Bobcat Goldthwait’s little-seen dark comedy, World’s Greatest Dad, gives Robin Williams a turn as character dealing with his insufferable son’s suicide. It is as dark as comedy can be. Not a perfect film, but lacerating and unforgivingly funny. While family audiences laughed through his antics in at Night at the Museum and Happy Feet, I was pushed back in my seat by his performance in Insomnia.

Yesterday, as news of Williams’ passing spread, comedian Patton Oswalt — no stranger to the dark comedy of processed pain — reminded us of an old joke via Twitter, one that stems from the Leoncavallo opera Pagliacci:

The doctor says, “I’ve got the perfect remedy for you. In town tonight is the great clown Pagliacci. He’s hysterical and will make you howl with laughter. You will be happier than ever before.”

The man bursts into tears. The doctor, confused, asks why… 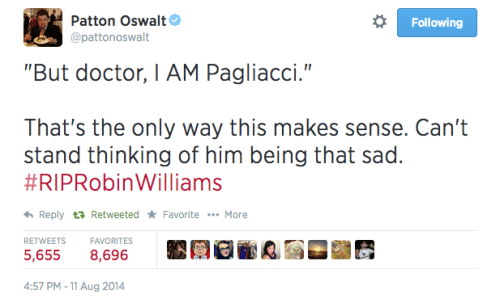 Robin Williams made me laugh. He made me suffer. And now he makes me appreciate what being so connected to the joy and pain of life cost him. I will keep searching for his grail. He deserves it.

Until next week, sir: nanu nanu.