Remember when Return of The Jedi was the SHITTY Star Wars film? Seems like a long time ago in a galaxy even farther away, doesn’t it?

When I saw The Phantom Menace, I thought “Just be as good as Return of The Jedi.”

When I saw Attack of The Clones, I prayed “Oh just be as good as The Ewok Caravan of Courage made-for-TV movie.”

By Revenge of The Sith, I wondered if they could top The Star Wars Holiday Special. Whether they did or not is debatable.

Rewatching Jedi recently made me realize all the good things about it. The opening Jabba sequence is like a contained 35 minute Star Wars adventure. The space scenes are still the best ever. The speeder bike chase rocks. Even the reviled ewoks are better than their CGI counterparts. Name one moment in Clones or Sith that was as cool as the two logs smashing the AT-ST’s head!

But there are still some annoying flaws in the film that stand out and could have been easily fixed with a quick re-write. They would have filled plot holes in the prequels as well. And these slight changes still could have allowed Lucas to market all the ewoks he wanted.

Be warned. There are spoilers to a 31 year old movie ahead. And if you got this far in the post, I am assuming you have seen Return of The Jedi.

1. Have Lando save Han on Tatooine 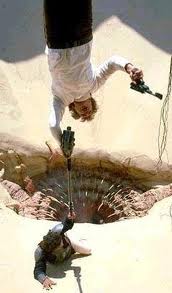 When Luke says to Han on Jabba’s skiff, “Stick close to Chewy and Lando,” that can’t be reassuring. As far as Han knows, Lando is the fink who turned him over to Boba Fett. He didn’t get to see Lando help everyone escape in Empire. He was too busy being a coffee table sized trophy. When the Sarlaac almost eats Lando, Han might as well be thinking, “Good!”

But imagine if Han fell over and Lando needed to save him. Lando would get his redemption and Han would trust him again. Then again, it’s one of Han’s few highlights in the film, but more about that later.

One of the biggest let downs of Jedi is how easily Boba Fett is dispatched. There’s no confrontation between Fett and Han Solo. Fett’s jet pack is set off by accident. One of the coolest characters in the series is killed as a joke.

Imagine if Chewy could go 100% Wookie on Boba Fett. Remember how Wookies tear people’s arms out of their sockets when they lose? How about when they put their best friend in carbonite? We saw Chewy try to strangle Lando in Empire. Imagine the joy of him taking out Boba Fett, tearing out his arm and throwing him to the Sarlaac.

You could even include the burp. 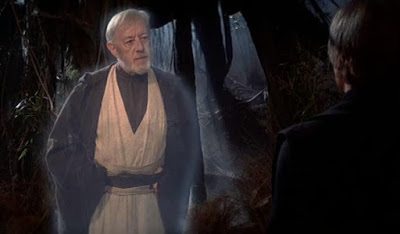 Did you ever read the novelization of Jedi back in 1983? In that version, when Ben speaks to Luke on Dagobah, he says:

Your mother and I knew he would find out eventually, but we wanted to keep you both as safe as possible, for as long as possible. So I took you to live with my brother Owen, on Tatooine…

If you have a more recent printing of the novelization, don’t bother looking that part up. It was cut out, like Han shooting first.

Doesn’t Owen being Obi Wan’s brother make so much more sense? He would hide Luke in a remote planet, have his brother raise him and keep an eye out for him. And think of the disdain that Ben and Owen have for each other in Star Wars. Owen says, “That wizard is just a crazy old man.” Ben says, “That’s your uncle talking” with disgust.

That’s the sound of two brothers who went two separate ways, or as Ben says, “a damned fool idealistic crusade.”

A relationship between Owen and Bed would have real dramatic weight. As it is, Anakin is a kind of vague step-brother to Owen that he meets once, shows up with his mom’s corpse and flies away, taking the protocol droid that he would forget about.

And while we are talking about Ben’s family…

Bear with me on this.

Luke and Leia being brother and sister doesn’t make any sense. The first two movies are clearly creating a Han – Leia – Luke love triangle. Plus there was a scrapped subplot about another Skywalker being trained on a distant planet, which was the “other” Yoda spoke of. And the scenes of Leia with Vader in Star Wars are not written with any father/daughter subtext.

But Leia clearly has the force, as we see when Luke speaks to her hanging off of Cloud City. How do you make that Leia Jedi connection while not turning Star Wars and Empire into creepy incest fetish films?

Simple. Leia is Obi Wan’s daughter. He has Senator Organa raise her as his own. That would make, in retrospect, the “Help me Obi-Wan Kenobi” scene from Star Wars a daughter’s plea to her father and get Ben off his butt and back into the Jedi business. Plus it would end any twins nonsense in the prequels.

Sure, that may cause some NEW plot holes, but none worse than a passionate brother/sister kiss in Empire.

5. Make the Rebel Attack an Invasion of Coruscant

This is the conclusion of the saga. Everything is building up to this movie. There is one big battle that will basically decide the war. And it is fought off the moon of another planet? The Jedi battle needs to be like Normandy. Many of the D-Day elements are already there. The Rebellion is bigger now (welcome the Mon Calamaris and the Nein Numbs to the cause) and they’re going to launch everything at a single target.

But we never see the Imperial City nor the seat of power. The liberation of the Galaxy has to be on the capital planet. You can still have a new Death Star guarding it. You can still have the security shield generated from the forest moon. But the target needs to be bigger with stakes this high.

6. Have one ship crash against the shield 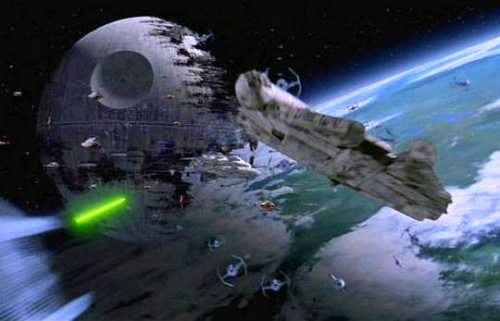 We HEAR there’s a shield, but we never see how powerful it is. Give us one Y-Wing not pulling up in time, just to show how strong it is.

7. Include one shot of the Millennium Falcon gun turrets during the space battle

They shot scenes with them. Just show one TIE fighter being taken down old school style! Just don’t get cocky.

8. Show ONE B-Wing Fighter in action 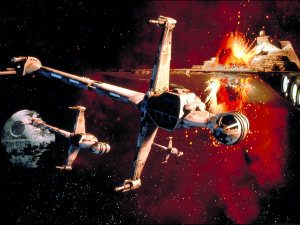 Seriously. They don’t appear in another shot after all craft pulled up from the shield. Why couldn’t we see a few shots of them attacking a star destroyer? Trim back one or two ewok shots and give us some fighting B-Wings!

That image above is a conceptual painting. It looks awesome. Wouldn’t mind seeing that in the movie.

9. And while we are at it, one female pilot would have gone a long way 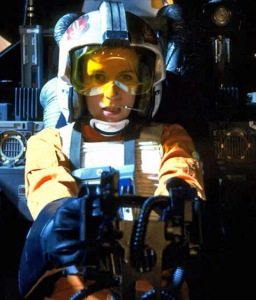 Remember the A-Wing pilot who’s shot down by a pair of Tie Interceptors? Did you know that pilot was played by a woman? I bet you didn’t, because they redubbed her with a man’s voice.

Today that would spark outrage. But then again, today Lucas would have shot this scene with a shitty looking CGI Greedo looking pilot or something.

Few women populate the Star Wars universe. They began addressing some of the “all white” qualities of the cast by the time Jedi came about. We see Asian and black pilots and a few commandos of color. But why not any women pilots? Especially since they SHOT SCENES WITH THEM?

Evidently there’s an old woman A-Wing pilot and a younger woman X-Wing pilot. Perhaps they felt like little boys weren’t interested? As if the sight of a female X-Wing pilot would have stopped anyone from seeing a Star Wars movie in 1983!

Besides, you’re telling me you can have Princess Leia in a metal bikini but you can’t have one in an orange jumpsuit taking out TIE Fighters?

10. Give Han Solo a bigger scene to shine

Every main character in Jedi has a key moment. Luke, Leia, Lando, Chewy, R2, 3PO, Vader/Anakin, and the Emperor all have fantastic highlights. Newcomers Jabba, Ackbar, and the Ewoks leave their thumb print, as does token survivor Wedge.

But where’s Han Solo’s big moment? Shooting the tentacle holding Lando? Tricking the Empire into opening a door? Han’s edge is totally dulled and Harrison Ford seems like he would rather be in carbonite, waiting for the next Indiana Jones movie to start. No wonder he kept insisting that Han get killed off.

Remember that the battle on Endor is the first time we really see Han Solo fighting for the Rebellion. He shows up at the last second in Star Wars but is packing up to leave in Empire. When the walkers are attacking, he’s busy repairing his own ship.

So finally in Jedi we see him in battle. How does he do? He steps on a branch that gives him away. He gets caught in a net. He needs an Ewok to steal a speeder bike to distract the bunker guards. He taps the shoulder of a scout trooper. He gets captured and is called scum. And later, can’t open a door.

That isn’t a passing grade. I know the Endor battle is supposed to show low-tech weapons bringing down the Empire. Why not also use it to show Han coming full circle? The cynical rogue as brave general, showing off his military leadership in leading one of the final attacks.

Basically we saw that with Viggo Mortensen in The Lord of the Rings movies. It would have been nice to see that with Han Solo.

Maybe with current digital technology, some of these changes can be made! Maybe we can adapt the Star Wars movies like multimillion dollar Choose Your Own Adventure books. Any of these changes have got to be better than the Special Editions.

Don’t believe me? I have one word for you: 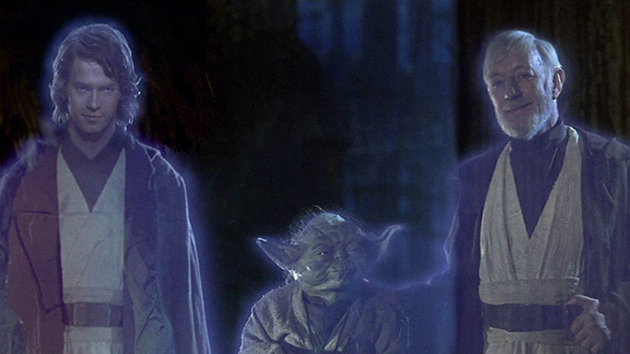