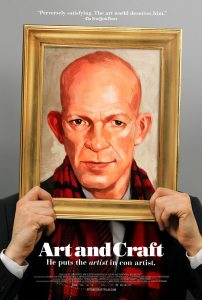 Mark Landis paints beautiful pictures. He produces like Picasso, or like Dr. Seuss, or like any exceptionally gifted 15th Century monk. In Art and Craft, that’s precisely what the man does. Using everyday materials like instant coffee and colored pencils, Mark Landis forges valuable artworks. Then, posing as a philanthropist, he donates his creations to museums across the United States, where they’re gratefully accepted and hung in galleries.

Maybe you’ve seen his work and thought it was authentic?

Directed by Sam Cullman and Jennifer Grausman and co-directed by Mark Becker, the documentary Art and Craft impishly hangs Landis — a true original — up for our inspection and interpretation. This unique individual lives for forgery. The documentary slowly and subtly extracts our assumptions about authenticity, morality, and sanity. Which makes it, original or not, art. Or is that craft?

Either way, it’s worth watching.

Primarily, that’s because Mark Landis isn’t sane. I’m not making a value judgement; that’s medical opinion. As a young man, Landis was committed following a nervous breakdown and diagnosed with an impressive string of mental ailments, including schizophrenia. Throughout the film, we follow him into various psychiatric appointments where he is asked, routinely, if he’s had suicidal thoughts or any hallucinations lately. 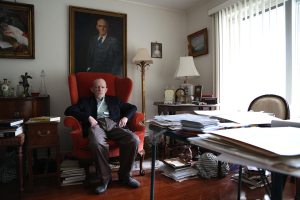 I am a prolific forger of art.

Nope. Mark feels pretty good. This despite the fact that ornery and obsessive museum registrar, Matthew Leininger — once duped by Landis — has made it his life’s mission to curtail the forger’s reign of philanthropic japery. It is Leininger’s life mission because what Landis does is not illegal.

This is where Art and Craft illuminates most effectively. Without drawing any brutalist lines, the film allows you, the viewer, to draw your own conclusions from the odd careers of Mark Landis and Mark Leininger. One or both is certifiable. One or both is also likely engaged in something morally dubious, but it’s not at all obvious which. 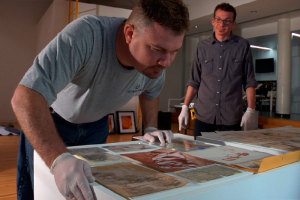 I am devoted to squelching pretenders.

There is something spidery about the art world and the way it assigns value. Do we appreciate a painting for its beauty, for its provenance, or for how much it fetches at auction? Mark Landis avoids all of that and, unintentionally, makes men and women like Leininger look like fools. This is not his intent. His intent is merely to do what he does best — forge paintings — and, hopefully, put himself in situations in which others are pleasant to him — situations which otherwise do not often arise.

That pleasantness, of course, is also a forgery of affection. Unlike Landis’, however, it does have criminal intent — to con its mark out of items of value.

This distinction is not one that Matthew Leininger has gleaned. He doggedly tracks Landis, although it costs him his job, in the hopes that he can remove wrongness from the sanctified world of aesthetic achievement.

Art and Craft is a gentle film. As you might picture, there is little in the way of grand drama captured in its easy length, and yet it does churn with humor, tension, and warmth. Frequent cutaways to static closeups expose the beauty in everyday objects. The score, by Stephen Ulrich, mines big band jazz and Landis’ always-on television to contextualize the semi-innocent skulking of its subjects. Landis himself, like a cross between James Carville and unspooled gauze, could not be more fascinating or authentic. Watching him talk on the phone is a treat.

Truly intriguing is how I’d describe Art and Craft. It’s not world changing, but it is world challenging. Landis creates art. You can decide for yourself who, if anyone, it belongs to. After all, the craftsman is keen to give it away.

2 responses on “Art and Craft Boldly Forges Ahead”