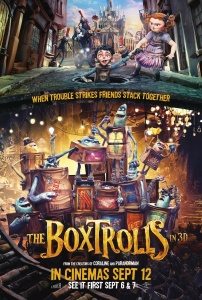 You don’t know nothing about them boxtrolls.

Stars of Laika Studio’s newest stop-motion feature, The Boxtrolls, these are squidgy, cavern-dwelling, beetle-eating, misunderstood troglodytes that you hate to love, or love to hate — but either way, they keep their secrets better than most. This is because what they say is endearingly unintelligible, just like Bane, or Sarah Palin.

But here at Stand By For Mind Control, we’ve unearthed ten fabulous secrets about these odd-bodies and the film that bears their name. We will share those secrets with you now.

2. Visually, The Boxtrolls is impressive and impressively gross. While the semi-Gothic town of Cheesebridge where the story takes place evidences inspired steampunky locations, it also doesn’t shy away from things that are downright disgusting. This is perfect for your kids, who, if you didn’t take them to the movies, would likely be down by the river poking some dead thing with a stick. Or with your toothbrush. The Boxtrolls is full of pus and swollen tongues and insects and truly horrible looking people. Like Sarah Palin.

It’s not quite as gross as ParaNorman‘s zombies or as visually stimulating as that film’s witchiness, but it is repulsive, if you’re paradoxically attracted to that sort of thing. 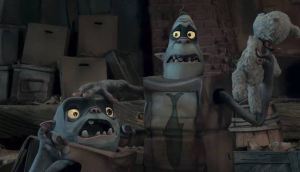 3. Speaking of repulsive, the collective noun for boxtrolls is ‘a gross.’ In this story, a human baby is carried away by a gross of boxtrolls and raised in the sewers to wear a box, make mechanical devices out of garbage, and avoid capture by the villainous Archibald Snatcher (Sir Ben Kingsley). Snatcher wants to capture and kill all the boxtrolls because doing so will earn him a white hat, which white hat will elevate him into the elite circle of Cheesbridge’s fromage-obsessed aldermen.

4. While the boxtrolls in The Boxtrolls look comfortingly like your Great Aunt Gertrude dipped in melted blue Otter Pop, the humans — surprisingly — mostly look like they stepped out of paintings by Francis Bacon.

5. While the press notes do not note it, the best character in The Boxtrolls is incontrovertibly Mr. Gristle. Mr. Gristle has the best name — closely followed by the monikers Mr. Trout and Mr. Pickles — the best dialogue — limited to single word utterances such as “leeches!” — and is modeled after Ronald Lacey, who played Major Toht in Raiders of the Lost Ark.

This is also mysteriously not mentioned in the press notes, which I never received or read. 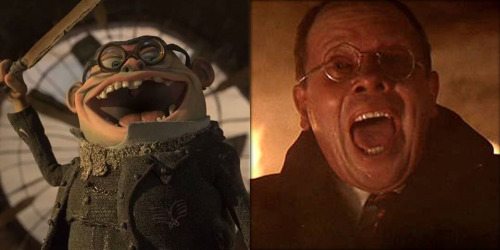 6. While the credits specify that Tracey Morgan performs the voice of Mr. Gristle, the secret is that you are now going to have to upgrade your evaluation of Tracey Morgan’s appeal from ‘limited’ to ‘marginally limited.’ 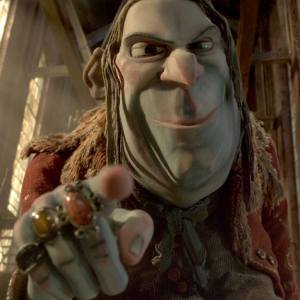 Mr. Archibald Snatcher wants to be a cheese-eater.

7. As alluded to earlier, the thrust of the drama in The Boxtrolls centers around a boy — named Eggs (Isaac Hempstead-Wright) — who finds himself the only one able to save his gross of boxtrolls due to his accidental humanity. Unfortunately, the film fails to establish much in the way of character or personality for Eggs. His boxtroll surrogate father, Fish, has as much character as a character who does not speak intelligibly can — meaning not much. The boxtrolls each have their identifying personality quirks, for example one has false teeth, but they don’t really have personalities, or any backstory, or anything resembling motivations.

They want to steal about at night rummaging through the garbage, even though this threatens their survival. Why? That’s just how they are. Winnie, the town’s Lord’s daughter, (Elle Fanning) wants more paternal attention, but that, plus ‘pushy’, more or less sums her up. Eggs wants to save his adopted family because he’s not a jerk. Snatcher wants a white hat, because — hey, white hat.

Secret number seven is the filmmakers probably should have done a little more work to help audiences invest in these characters. They look gross, and unique, but they don’t offer much to hang on to emotionally.

8. Unfortunately, this muddled sense of motivation also extends to The Boxtrolls‘ themes. There’s something in here about parents caring for their kids. There’s something in here about being in control of your own destiny. There’s not much in here to give you a through-line, though. The Boxtrolls doesn’t begin or hit its stride being about paternity, or about self-actualization — it starts and continues being about a little adventure, a little nausea, and a lot of excellent stop-motion. 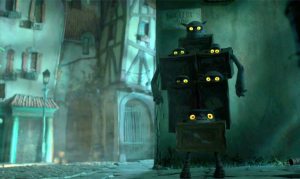 9. With Nick Frost playing Mr. Trout and Simon Pegg playing Herbert Trubshaw — Eggs’ human father — The Boxtrolls represents the Nth project the pair has appeared in together but the first in which they are both upstaged by Tracey Morgan.

10. While The Boxtrolls may be light on depth, it’s deep on disgusting. For that, I dug it.

It’s no secret that I think kids films should be challenging.

I had high expectations for this one, having adored ParaNorman, and feel slightly let down. But The Boxtrolls is quality entertainment. The work of Laika Studios is exceptional — stick around for a mid-credits tag to see some of it in action. It’s easy to forget that at one time all animation was done by hand. To my mind, some of the best of it still is.

As beautiful as Rango and How to Train Your Dragon 2 may look — and little looks as stunning — work like this shows fingerprints. I hope it encourages kids to get their hands dirty, to re-evaluate the sanity of decorum, and to make pustulant films.

Because that’s what life is all about.