Is it just me, or is something terribly off about Doctor Who? I mean, yes, I know something’s off with me, but that’s purely a medical condition I’d rather not go into here. Doctor Who, though. It doesn’t feel right. 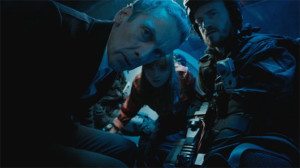 Peering into the Dalek

This week’s episode doesn’t really pick up from last week at all. Some crazy madness is going on in some far off future, the Doc shows up, as his is wont, but without Clara. What happened to Clara? Well of course she’s teaching school someplace. Because why? They don’t travel together anymore? I think we’re back to the problem of Clara having no identity whatsoever. So she’s a schoolteacher now, but sometimes is called upon by the Doctor to go on adventures. I see.

So this isn’t their first adventure since last week? Then why is the Doctor is acting exactly the same, kind of spaced out and not sure who he is? It’s very odd. On the one hand, he’s stricken with remorse at the vast catalogue of questionable actions he’s taken over his long life. “Am I a good man?” he asks Clara. On the other hand, he’s acting as though he has little memory of his past incarnations. His encounter with a Dalek at the beginning of this episode more or less mirrors Christopher Eccleston’s way back in series 1. Only that episode rocked. This one does not. There is no rocking to be had. 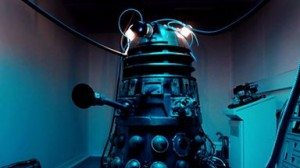 There is a wee bit of fun, though, which is that along with some never explained military personnel in a never explained future up against a never explained problem, the Doctor and Clara are miniaturized and sent into a sick Dalek. “Good idea for a movie,” says the Doctor, and indeed it was, but without Raquel Welch, is it that good an idea? Well, at least director Ben Wheatley gets to play around more than last week. There are some trippy visuals I enjoyed.

Why go inside a sick Dalek? To make it well again! Why make a Dalek well? Because this one wants to exterminate—other Daleks. So I guess by healing it, it will in good health go on a Dalek killing spree? This seems like poor logic. I mean, won’t curing the Dalek of its illness cure its new look on life and turn it back into a healthy, killing-everything-but-Daleks Dalek? Is no one going to ask such an obvious question? 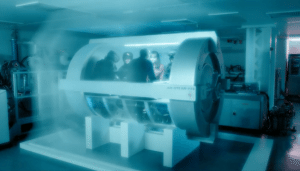 They are not. Because what happens is exactly that. They cure it and it’s evil again. Whoops! If only anyone besides every single person watching the show had seen that coming.

Luckily, the Doctor does a Vulcan mind-meld with the Dalek, it sees the past evil actions of the Daleks, it sees the grand beauty of the universe as known by the Doctor, and, most important of all, it sees how very much the Doctor hates Daleks. So it goes on a Dalek killing spree, which it concludes by telling the Doctor, “You are a good Dalek.” Which is kind of a bummer, and not exactly the vibe the Doctor was hoping to be known for.

Meanwhile, one of the soldiers dies and winds up with Missy in heaven, same place Mr. Mechanical Face wound up last week. I get a feeling she’ll be having a lot of visitors this series. Maybe even…The Doctor?! 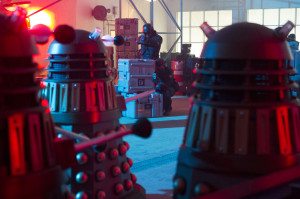 Now you’ve made them angry

And there we are. This show feels adrift so far. It doesn’t feel connected to what came before. Or maybe that’s the point? Maybe, to be generous, the tone of the show reflects the state of the Doctor’s mind? He doesn’t know who he is or whether what he’s doing has any value? Maybe the muddle of the series so far will lead to something driven and meaningful later on? We’ll have to hope.

I’d write more, but the medical condition, you know, it’s acting up. I must have fruit!