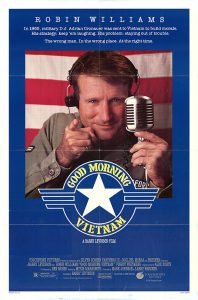 When Good Morning Vietnam came out in 1987, everyone ran around in their happy pants, dancing and chortling and waking up their parents at 6:00 am with jokes about how hot and wet the jungle was, talking about when their friends were dying in it. Robin Williams was the reason. He spouted so much improvisational insanity as Armed Forces Radio Service DJ Adrian Cronauer that he earned himself an Academy Award nomination for Best Actor.

But he lost to Michael Douglas’ oozing Gordon Gecko in Wall Street.

Deservedly so, too, even if that was a soft year for lead actors — because here’s the thing:

Good Morning Vietnam is not that good a film. Robin Williams isn’t that great in it.

Stop sputtering. I just watched the film again, for the first time since 1987, and what I say is true. 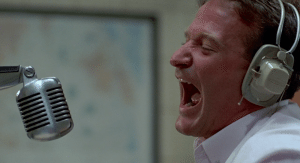 Robin Williams, yes, is quite funny in this, doing his Robin Williams impersonation. He completely nails Willaims’ manic ability to mimic voices, spout insane non sequiturs, and produce concentrated vim. Alas, Cronauer’s unhinged broadcasts only comprise a small part of the film — and they’re not particularly pertinent to what passes for a plot.

In case you don’t recall, Good Morning Vietnam‘s story is extremely thin. A DJ is brought from Crete to Saigon to entertain troops in 1965, as the conflict in Vietnam is building into war. Cronauer clashes with his humorless superiors, who do not appreciate his insouciance. He wins the adoration of his more-Earthbound colleagues. He chases the first girl he sees — a local — and learns a little about Viet Nam through his interactions with her and her family. Then, in what’s supposed to be a sad ending, he realizes he knows very little and gets sent home on a commercial flight, where presumably he will not be blown up or shot in the face or slowly eaten away by fear in the hot and wet jungle. 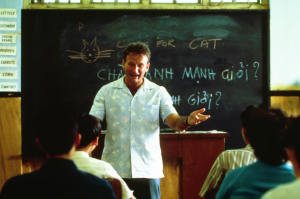 I met her in the morning and my heart stood still. A doo ron ron a doo ron ron.

Watching Good Morning Vietnam again, it’s both hard not to appreciate how funny Robin Williams was and how this performance of his — of a character with little in the way of motivation or meat — barely scratches the surface of his capabilities. Since this film came out in 1987, Robin Williams’ made The Fisher King, World’s Greatest Dad, and Good Will Hunting. In roles in pictures such as these he inhabited characters with much greater range and depth. His emotional core — that which underpins and fuels his comedy — goes down deep into the black.

Here, you sense that, but that’s all. 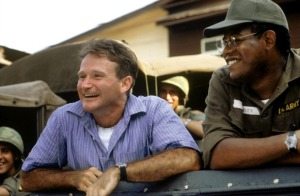 Whatever you think of Good Will Hunting — in comparison — Williams well deserved the Oscar he took home there for his turn as Dr. Sean Maguire. That character’s struggle with the death of his wife, his fraught relationship with his more successful colleague, and his sparring with Matt Damon’s Will Hunting — it’s unsheltered, powerful work. Good Morning Vietnam avails itself of little of this potential. There’s a scene where Cronauer gets coaxed into entertaining troops, and another when he confronts his own naivety in the face of duplicity, but these feints at drama are only suggestive.

And about the funny. If what you want to see is Robin Williams being funny, why bother intercutting his genius improvisation with endless, Hallmark card montages of army life in Viet Nam? The man is funnier, without interruption, in far more places than one can list.

So Good Morning Vietnam reminded us of — or perhaps introduced a few of us to — Robin Williams. That explains why we liked it then, but not why we should still like it today. 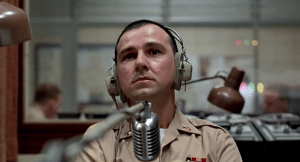 And perhaps some night we could maybe get together and swap humorous stories, for fun.

Among a talented cast of supporting actors — J.T. Walsh, Forest Whittaker, Robert Wuhl, and Richard Edson — Kirby’s flawlessly unfunny performance as Second Lieutenant Steven Hauk is hysterical. It is far funnier than anything that comes out of Williams’ mouth or brain in Good Morning Vietnam. 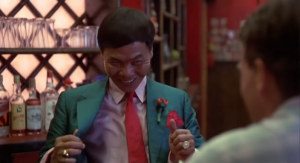 Kirby doesn’t get the attention Robin Williams did. He rarely receives the applause Billy Crystal hoards But Kirby’s straight man slays. While Williams’ Cronauer extemporizes comedy about celebrities and situations, Lt. Hauk stands there, genuinely unamused, insisting that HE is the funny one.

He’s right. Hauk’s total lack of humor, his self-serious demeanor, his wall of protective delusion — this is the funniest thing about Good Morning Vietnam. I am sorry they never made a sequel of just Hauk doing his polka/comedy radio show, knowing in his heart that he’s funny. 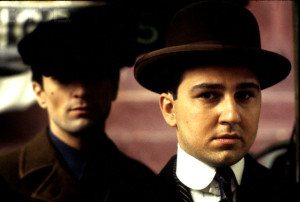 With all due respect to a great man

They say drama is easy; that it’s comedy that’s hard. I think, to take it a step further, that it’s comedy disguised as drama that’s the hardest. To play a role straight and let the absurdity speak for itself; this takes control and commitment and talent.

I’m still lamenting the death of Robin Williams. But Bruno Kirby died in 2006 of leukemia when he was only 56. He was the young Clemenza in The Godfather Part II. He played — again, straight — Jess in When Harry Met Sally seriously suggesting ‘baby fish mouth,’ as you surely remember. In City Slickers, It’s Garry Shandling’s Show, This Is Spinal Tap, Tin Men, and others Bruno Kirby quietly carried the weight. You may not have taken note, but he was there.

And even though he didn’t demand attention, he knew he was funny, in his heart. And he was right.