In 1992, to celebrate the not exactly politically correct hero Christopher Columbus, competing production companies with lots of foreign money and big names raced to reach the theaters first. Granted, Columbus’ voyage had been portrayed many times before, including in a 1949 film starring Fredric March, but these two wanted to be made in time for the 500th anniversary of his trip.

Both films were released and made an unfortunate discovery of their own. Audiences did not want to see one Columbus movie, let alone two.

The second Columbus film released in 1992, Ridley Scott’s 1492: Conquest of Paradise, is a bloated snoozefest. The less said about that film the better.

However the first film to make it into cinematic port, Christopher Columbus – The Discovery, is one of the most fascinatingly terrible movies of all time. The film itself is a spectacular catastrophe. The behind-the-scenes insanity of the picture is the stuff of legend. One star sued for fraud, one threatened to quit and, in the end, a celebrated father and son producing team ended up in court at the urging of Charlie Chaplin’s daughter.

With the 500th anniversary of Columbus’ first voyage to the America’s (which I believe is the politically correct way to refer to it) the Spanish Government became publicity savvy enough to commemorate the event as one of Spain’s great achievement. The official Columbus Day celebration commission offered government assistance to a film that would celebrate his memory. That caught the attention of the father and son producing team of Alexander and Ilya Salkind. They had their greatest success producing Superman in the late 1970’s, as well as the successful Three Musketeers adaptation by Richard Lester.

They seemed focused on making movies about easy to define heroes known by everyone. Superman became a franchise. Supergirl didn’t work. Neither did their bizarre Santa Claus: The Movie. But Columbus seemed right up their alley. 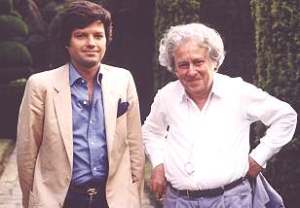 I believe the father is on the right.

At first they brought in Ridley Scott, who was making Thelma and Louise, to direct their opus. Scott wanted to make a film about Columbus’ whole life. The Salkinds wanted to make a swashbuckling epic in the spirit of Captain Blood, even though Columbus’ actual voyage did not resemble an Errol Flynn film in the slightest. Scott left the production and was quickly hired by the French company Odyssey Distributor Ltd, who began work on their own movie, whch would ultimately become 1492.

Undeterred, the Salkinds brought in Rambo: First Blood Part 2 and Cobra director George P. Cosmatos to helm their film. Then the Salkinds made a big splash by signing a star, James Bond himself! No not Sean Connery, nor Roger Moore, but Timothy Dalton, a classically trained English actor, to play the Italian Columbus. Dalton was promised the film would have an all star cast, with names like Marlon Brando, Dustin Hoffman, and Angelica Huston floated about. Godfather scribe Mario Puzo was hired to write it. (The Salkinds also paid Puzo a mint for writing Superman 1 and 2, even though most of his script wasn’t used.)

At the Cannes Film Festival of 1991, both Columbus productions made their presence felt with replica boats and giant presentations declaring the arrival of the next great epic. The Salkinds bought out 6 pages in Variety announcing their opus with an unintentionally hilarious series of production paintings. The final one showed the Santa Maria approaching land with a cloud shaped like the Statue of Liberty floating above it. Seriously.

The president of the French company financing 1492 insulted the Salkind film saying “I doubt if their movie will ever be made.”

The Salkinds won the blessing and financial support of the Spanish government. Their film would be given the title Christopher Columbus – The Discovery. The odd subtitle implies there was another Columbus adventure worth telling and maybe a franchise.

Then holes sprang into the production. Cosmatos clashed with the Salkinds and left. Dalton, angry that he was losing his director and not being surrounded by other stars, sued the Salkinds $25 million for fraud. Maybe he intuited the film was going to be a turd and wanted out. Isabella Rosellini, cast as Queen Isabella, quit along with Dalton. 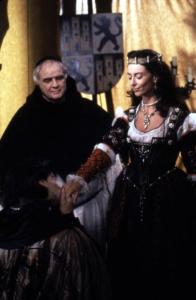 Eventually Dalton’s 007 director John Glen stepped in. He imported License to Kill co stars Robert Davi and Benicio Del Toro to the project. Unknown Welsh actress Catherine Zeta-Jones was also cast. Rachel Ward signed to play Queen Isabella. This was hardly an all star cast in 1992. Going back to the Superman well, they offered Marlon Brando $5 million to make a cameo as the Cardinal Torquemada.

With Brando in tow, the film made its strangest decision. For the role of the the Spanish King Ferdinand, the Salkinds signed Tom Selleck. On the surface, it was a puzzling bit of casting. On screen, it would be surreal and jaw dropping.

George Corraface played the title character. He was French and Greek, making him vaguely European enough for American audiences. The Salkinds were hoping for the same success they had with Christopher Reeve as an unknown starring in their epic. Corraface would prove how good Reeve was.

The film went wildly overbudget and the Salkinds tried to file for bankruptcy before filming ended. Brando threatened to walk from the movie and did indeed fail to show up to work. Selleck, stating that acting with Brando was the sole motivation for doing the movie, threatened to quit if Brando quit. Gandhi writer John Briley was brought in to rewrite Puzo’s script. Carey Bates, who wrote for the Salkind TV series Superboy rewrote Briley’s script.

When the $40 million film staggered into theaters on August 21, 1992, it was ravaged by critics and grossed less than $9 million. Roger Ebert particularly hammered Brando’s lazy performance. “He’s phoned in roles before, but this was the first time I wanted to hang up.”

Watching the movie itself, which I have now done four times, is both hilarious and agonizing. Despite shooting in some exotic locations, the film looks cheap. There are lots of hand held sequences and the sparsely populated group shots make it look like an under-budget mini series. Even the opening titles looked like low budget TV credits.

Corraface has terrific teeth and speaks in a vague accent. He has zero charisma on screen despite being a handsome enough man. Corraface plays Columbus like the creepy European guy who your girlfriend might fall for.

Brando’s performance is fascinating in its laziness. He reads Papal decrees which obviously are the sides for the scene. At one point, they cut to Brando, sitting and looking larger than the land Columbus would eventually discover. With his eyes shut, it looks like the DP caught him napping. 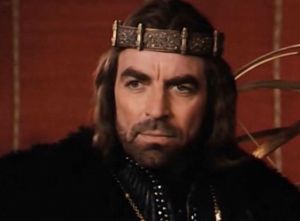 From the minute Tom Selleck appears on screen, the film shifts into the surreal. It’s like watching a dream episode of Magnum PI seeing Selleck in period costume. He attempts an accent for exactly one word. He pronounces Portugal “Por-too-gallllll.” The rest is just Tom Selleck in a silly outfit.

Attempts to add action and sword fights are forced and sloppy. While on the high seas, Columbus communicates between ships by yelling. Heaven knows the winds on the Atlantic Ocean would make it easy to just talk back and forth. Cheap lightning effects attempt to make the voyage more interesting. They fail.

Eventually Columbus tells his disgruntled crew that they can behead him if they don’t find land. His head gets put on the block and just as the ax goes up, someone yells “Land Ho!”

I’m not kidding. That’s in the movie.

In the West Indies, Columbus and his men treat the natives with dignity, with Robert Davi returning some stolen goods. A single rat is shown running off the boat, as if to say “Some bad shit happens too.” But this is a Salkind production and Columbus is a hero and he returns to Spain with singing happy slaves and pats on the back from Ward, Selleck, and Brando who all realize their checks are going to clear. The final image is a helicopter shot of Columbus standing on a cliff for no reason. Clearly it was too expensive a shot to leave on the cutting room floor.

The disastrous film did more than lose money for anyone not named Brando or Selleck. Ilya Salkind sued his father and producing partner Alexander for fraud and racketeering. The father blamed the lawsuit on “that woman Jane.” That would be a reference to Jane Chaplin, the woman who was carrying Ilya’s child and loaned Alexander nearly $7 million to keep the movie afloat. And yes, she was Charlie Chaplin’s daughter.

The Salkinds never worked together again. Alexander died in 1997. Ilya moved to Orlando and has produced one unreleased movie since the Columbus disaster.

As the once powerful father and son producing team dissolved into strife and lawsuits, one can’t help but wonder how many times they thought “maybe we should have walked away from Columbus once the other production started up.”