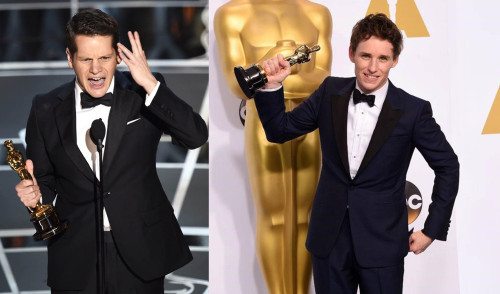 In case you were wondering which Oscars handed out this Sunday will not survive the scrutiny nor test of time, look no further than Graham Moore’s Adapted Screenplay win for The Imitation Game and Eddie Redmayne’s Best Actor triumph in The Theory of Everything.

Neither film was an actual great movie. They were both Academy Award Flavored products. If fine films like The Grand Budapest Hotel or Whiplash were butter, then these two were margarine.

Yet their awards were not exactly surprises. They punched the right buttons and gave the audience the impression they were seeing something profound, intelligent, important and of high quality without actually possessing any of those attributes.

I had the surreal experience of watching the two films on back to back evenings. An editor could have intercut scenes from Imitation and Theory and I probably wouldn’t have noticed the difference. It felt less like a cinematic experience and more like I was playing Oscar Bingo.

Each film had a card filled with Academy Award clichés to be quickly checked off as they progressed.

British Cast! Got it.

Jumping back and forth in time! Both.

Strong women who give speeches telling us how strong they are. Go Felicity and Keira!

Sometimes sinister British character actor in the supporting cast hoping to ride the coattails to a nomination. Charles Dance and David Thewlis ready and reporting.

Brilliant protagonist with some psychological or physical barrier. Both have it. 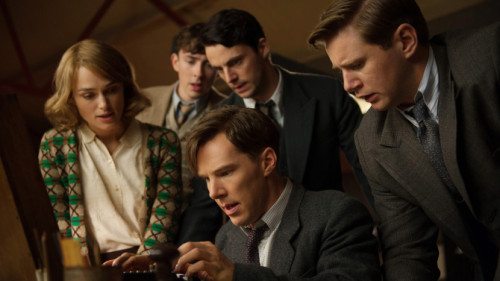 The script for Imitation Game was standard biopic fare that 10 or 15 years ago would have been a mediocre offering on HBO. The film is not bad, just not terribly memorable.

Benedict Cumberbatch twitches and stares at equipment and acts very Spock-like while spouting scientific jargon that nobody–not the writer, director or audience–can understand. But you know he’s smart because he stares at inanimate objects closely while fast piano music plays.

If the scientific jargon becomes too complex, then something quirky happens to distract the audience and not make everyone feel stupid that they can’t keep up with a genius.

Yet the film became important anyway because of the brilliant Oscar campaign launched by the Weinstein Company. Instead of focusing on the movie itself, Alan Turing’s neglected historical legacy was all they talked about.

“Oh you like computers? Did you know Alan Turing invented them in a barn ALL BY HIMSELF?”

“You never heard of him? No doubt because he was gay. Do YOU have a problem with being gay?”

Bam! You’re practically a Nazi-loving homophobe hypocritically using a computer if you DON’T vote for the movie.

In lieu of glowing critics’ notices, quotes from computer company executives stressing Turing’s importance were included in the advertisements, and quotes from historians praising Turing’s achievements were on the poster.

Even Graham Moore’s acceptance speech at the Oscars stressed that Turing was not rewarded in his lifetime. The Academy wasn’t honoring the Adapted Screenplay so much as Turing’s memory.

The script itself has come under fire for playing fast and loose with some of the facts, according to Slate.com. Turing’s role was not as solitary as the film suggests. Turing’s collaborator Gordon Welchman was cut from the film entirely. And Cumberbatch’s performance as a socially incompetent, closested homosexual evidently was not accurate. In truth Turing was socially extroverted and open with his sexuality. Even the stuffy British military officials determined to shut down the project were, in reality, close allies.

Why did his already dramatic story need such embellishment? Well, a standard biopic would not be dramatic enough if Turing were a confident homosexual collaborating with well-meaning people. And while audiences are accepting of a troubled gay character, showing the beloved Sherlock being full on confident gay might have been hard to sell.

Besides, Turing’s story was obscure enough that it could hit the standard biopic notes to great acclaim. And remember, a vote against the film is a vote against Alan Turing, whether real or fictionalized. 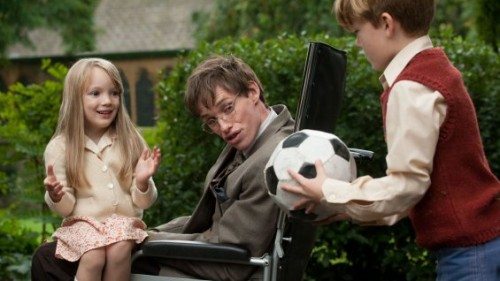 Meanwhile, Eddie Redmayne is now an Oscar winning actor. Sigourney Weaver has no Oscar. Glenn Close has no Oscar. Alan Rickman has no nomination. But Redmayne has inserted himself into “how did HE win an Oscar?” lists for all time.

Is Redmayne a good actor? I actually do not know. The only role I saw him play before The Theory of Everything was Marius, the single most boring character in Les Miserables. Marlon Brando circa 1955 couldn’t make that part interesting.

Was he good as Stephen Hawking in The Theory of Everything? I have no idea. He acted like he had Lou Gehrig’s disease. His glasses were crooked. He looked wistfully at the sky. He smiled that half grin while sitting in the wheelchair. He stared into coffee and saw how the universe was constructed.

All during the movie, I kept hearing Robert Downey Jr. telling Ben Stiller never to go “full retard” in Tropic Thunder. Of course Hawking is the opposite of the proverbial cinematic “retard.” But the Oscar acclaim seemed to be rewarding Redmayne’s physical acting rather than any compelling character he created.

Compare the Imitation script and Redmayne’s performance with the vastly superior Selma screenplay and David Oyelowo’s complex performance as Dr. King, one that avoided the traps of an impersonation.

Had Selma had the Weinstein publicity machine behind it, with ballots going out on Martin Luther King Day and in the wake of Ferguson, voting for it would have been a civic duty. A much easier sell than forcing us to learn about Alan Turing.

So if you want to win, make sure to play Oscar bingo with your script and your lead. There is a provable theory of nominations. And imitation is the way to win that game.