Here at Stand By For Mind Control laboratories, the Evil Genius and the Supreme Being have been busily stirring up a pot of powerful predictive chemicals the noxious fumes from which, when inhaled deeply and at length, bestow brief and startlingly accurate visions of the future. We have been inhaling deeply, oh yes, so very, very deeply, for many long and glorious hours. We have lived in the future, where to us, this year’s Oscar winners are a thing of the past. We know who won. And we gladly share the information with you. All we ask is a small percentage of your winnings. 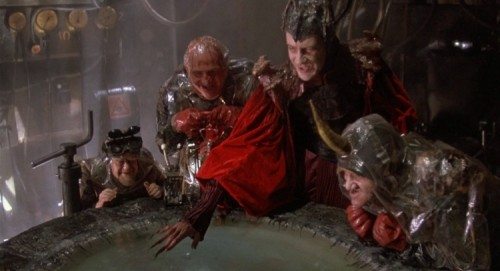 So get on that plane, head to Vegas, and bet big. You can’t lose!

Months ago Boyhood was a lock. But what’s this? Birdman has been scooping up awards ever since? Really? Birdman? No. Birdman will not win. But it will steal votes that otherwise would have gone to Boyhood. It’s a well established statistical fact that Academy members whose tastes lean toward the arty prefer movies beginning with the letter B. What does this mean for Best Picture? It means The Imitation Game. A movie built with no other purpose in mind than to win a Best Picture Oscar, and in the future to be mentioned in the same breath as past winners The King’s Speech, The Artist, Argo, Crash, Million Dollar Baby, etc., in sentences like, “I forgot that was even a movie.”

Granted, some might look at Boyhood and think, “Best Director, Richard Linklater? More like laziest director! Twelve years to shoot one movie? I shot mine in ten days!” But thankfully no one knows or cares who directed The Imitation Game, and Birdman‘s director, Alejandro González Iñárritu, is trying to sound awful dang fancy with alla those little squiggles on his name, so it’s Linklater’s year.

I didn’t see The Theory of Everything because I’d already seen one bland, boring biopic about a scientist this year, but word is Eddie Redmayne suffers from a terrible disease and winds up in a wheelchair with a robot in his larynx. So why even pretend there’s competition in this category?

I also didn’t see Still Alice, a movie starring Julianne Moore as a woman with a terrible dis–

It’s possible voters are so used to checking boxes marked “Meryl Streep” that she’ll squeeze out a surprise victory, but having seen the future, I’m here to tell you that Patricia Arquette has this one wrapped up. After all, she spent 12 years in character. That’s dedication.

So what about Ethan Hawke? He spent 12 years in character too, didn’t he? Well, sure, but he had that weird mustache. Nobody ever votes for a guy with a weird mustache. Another statistical fact. Anyhow, yes, some fine performances in this category, but nobody cares; they’re too worried that J.K. Simmons is going to jump down their throats and eat their livers if they don’t vote for him.

Well, isn’t it nice that what’s arguably the best movie of the year, Nightcrawler, got thrown a bone for Dan Gilroy’s script. That’s the only bone it gets. Everyone imagines Boyhood was made up on the spot, Birdman‘s all about the cinematography, and I refuse to believe that more than three voters watched Foxcatcher. Wes Anderson, welcome to your Oscar.

Whiplash? Really? Because writer/director Damien Chazelle adapted it from his own short film? Rules are weird. This is actually a tricky category. Screenplay awards are often given to movies people liked but feel funny about awarding picture/director to. Unless something sweeps. Imitation Game seems like a lock. But what about audience favorite American Sniper? Talk about an adaptation. Apparently the writer made everything up. Or so I have read on various trashy blogs.

Some interesting choices here. Let’s see, Ida is a Polish movie about a young nun in ’62 who learns her parents were Jewish and possibly died during the Holo–

I like gorillas. Doesn’t everyone like gorillas? Maybe it’ll go to the gorilla movie. Or maybe Finding Vivian Maier. People seem to like that one. I saw the Vietnam one, but found it kind of bland. Man, I’m behind on my docs. Sorry, I’m just killing time here. It’s gotta be the Snowden flick.

I didn’t thrill to The Lego Movie, but I still can’t figure out how it wasn’t nominated. Let’s see… Big Hero 6? I doubt many people saw the first 5 of them, so I don’t see how the sixth in a series wins an award.  Second in a series? Well, why not?

Winner: How To Train Your Dragon 2

Academy voters are notoriously, blissfully unaware of what editing is. But they definitely know when they’ve seen a lot of it. Which is why the award often goes to big, loud action-oriented movies. So a strange crop of nominess this time around. However, one stands out. The one where 12 years of footage was finessed into a single movie.

Another category in which subtle is rarely the winner. Dick Pope did great work on Mr. Turner, but it’s great subtle work. Emmanuel Lubezki, however, creating the illusion of one long take in Birdman, is the opposite of subtle. Sure, he won for the same trick (much better applied, in my opinion) in Gravity, but no matter.

It’s rare the best song category doesn’t consist of five of the worst songs you hope never to hear again. So which is it? Goofy happy (“Everything Is Awesome”) or soulful and uplifting (“Glory”)? Come on. It’s the Oscars. Comedies don’t play.

I wonder how many Academy members listen to scores, rather than just think back and say, “My god that Hans Zimmer made loud sounds in Interstellar“? Hmm, let’s see, what won the Golden Globe?

Winner: The Theory of Everything

These all sound kind of boring, aside from Grand Budapest Hotel. Maybe Into The Woods? Cause it’s all creepy? Nah, Malificent looks exactly the same. Split vote!

Well my goodness, how about the beautiful, subtle work with aging in Grand Budapest, and with facial prostheses in Foxcatcher–AND OH MY GOD THAT LADY IS BLUE!

Winner: Guardians of The Galaxy

If ever there was a Wes Anderson movie destined to win for its production design, it is this one. And deservedly so.

No one actually knows what sound editing is, but they vote for it anyway. Something to do with sounds. The more, the better. And what was louder this year than Interstellar? Only hold on. What about The Hobbit Part 9? Exactly the sort of movie this award normally goes to. It’s a tough call, but Nolan’s space epic wins it.

“But I already voted for sounds!” cry six thousand confused, angry voices. “Only what’s this, that movie full of music I liked is up for this one? Bingo!”

A tricky one here. Those apes looked swell in the apes movie, after all. And Interstellar is Smart Science Fiction (or so I am told). And yet… Everyone loved Guardians, didn’t they? They sure did. So many things went boom, after all. And did anyone really like Interstellar? Only grudgingly.

Winner: Guardians of The Galaxy

Oh man. The shorts. Impossible to call. Most voters abstain, having failed to watch them. Meaning the shorts awards are decided by maybe 10 people. Anyway, remember the classic, beloved Breakin’ 2: Electric Boogaloo? Yeah. Me too. Love that name.

What’s that? One of these is a Disney short? And it’s the blandest of the bunch? Sigh.

Why taunt us with so many shorts?! Well, this one’s easy. But only because I’ve seen into the future.

And there we are! Your 2015 Oscar winners. No need to fear entering your Oscar pool now. You are a guaranteed winner.