You see, Jesus has this brother who’s—

No, wait. There’s this really religious cop on the trail of this mystery hippie—

Or no. In the ‘50s, a woman was abducted and impregnated by aliens— 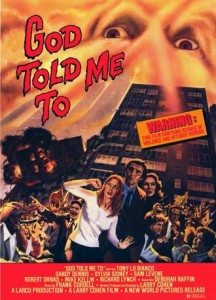 Let me back up. In New York City, on top of a water tower, is a man with a rifle, a cheap one with lousy sights, yet he’s picking off pedestrians one by one, maybe fifteen of them before the cops finally close in and climb up, led by Detective Peter Nicholas (Tony Lo Bianco), who asks the killer why he did it.

“God told me to,” he says, before leaping to his death. Other than the murdering, he seems like a nice enough guy.

Peter is perhaps overly alarmed by the killer’s reason. Turns out he’s a religious man, a very, very religious man. Goes to church every week, maybe every day. Tells his girlfriend he can’t divorce his wife because of her religion, when in fact it’s Peter who won’t get divorced. What would God think of him then? 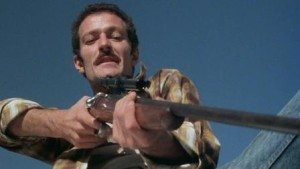 Nice guy with a rifle

A few more bizarre killing sprees follow. In each case the killer, before dying, when Peter asks why they did it, says, “God told me to.” In one case the killer, a husband who shot his wife and two kids, is sitting in his living room, calm and relaxed, while chatting with Peter (which led me to wonder about lax policing standards of the era; you’d think he’d maybe be in handcuffs, wouldn’t you?). He too seems like a regular guy. He’s not religious. Or at least he wasn’t until God spoke to him and told him to kill his family.

In another case, the killer is a cop who strikes during the St. Patrick’s Day Parade and is played by Andy Kaufman (in his first film appearance). How’s that for weird? 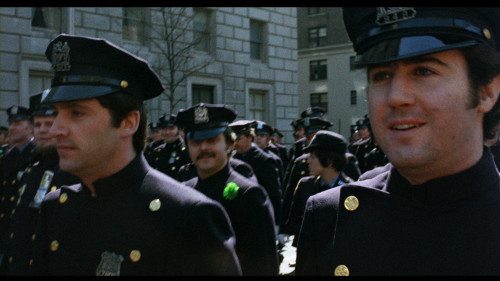 God told me to become a professional wrestler

Turns out there’s a connection between the killers. All of them were seen talking to a mysterious shoeless man with long hair, a hippie type, whose face nobody remembers.

It’s around this point in the movie where we cut to a boardroom full of what look like CEOs talking about who’s going to do some killing next. You see, they’ve all been called by God to, um, wait. I’m a bit lost here. 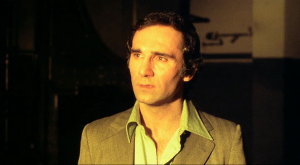 I was often a bit lost watching God Told Me To. It is a very weird little movie, written and directed by weird little movie-maker Larry Cohen, known for movies like It’s Alive, Q, and The Stuff, as well as for writing the Maniac Cop series. Having started his career writing television dramas, he was fond of police procedural stories where what the police are searching for turns out to be much weirder than normal.

So for example, Q: The Winged Serpent (’82) is about a demonic dragon bird living at the top of the Crysler Building who turns out to be the Aztec god Quetzalcoatl. It feeds on New Yorkers until a cop leads a SWAT team to its lair and takes it out (eggs are left behind, should anyone wish to make the sequel). 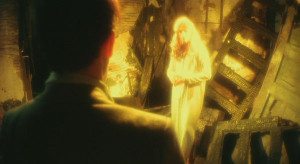 Hippie Jesus glows for you

God Told Me To is no less odd. Peter tracks down the hippie, who may or may not be the second coming of Jesus. He tracks down the hippie’s mother, who sure enough claimed to be a virgin when she found herself pregnant years before. How’d she get pregnant? That would be thanks to the aliens who abducted her.

And oh yes, we get to see the alien abduction flashback scene. It’s pretty fucking wild.

Cohen isn’t one for exposition, which I appreciate. He’s also not one for carefully building a logical story scene by scene. Shit just kind of happens. It keeps you watching, but whether or not Cohen has much to say here is hard to tell. 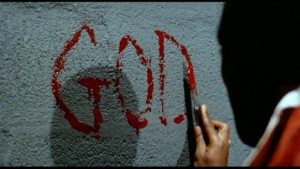 God will appreciate this

There are hints. The CEOs point out that only by bizarre mass killings may God make himself known. If he cured a few people, who would care? And the alien abduction, of course. Was the first Jesus but an alien? Or would we only pay attention today to an alien, rather than a divine being? Or maybe there’s no difference between the two?

Or maybe Cohen’s just fucking with us?

As for Peter’s identity, it’s a bit up in the air, too. He too finds himself with unusual powers. He too says God told him to do what he does.

Visually, it’s got a nice look, with over the top lighting effects denoting different locations, from the intense golden glow of the hippie’s rooms to a nightmarish red-lit sequence set somewhere else (or is it?).

What I like best about God Told Me To is what I like about every Cohen movie I’ve seen: it is not like other movies. It’s just demented enough to leave you saying, wait, who made this? And who let them make it? Always a good thing. 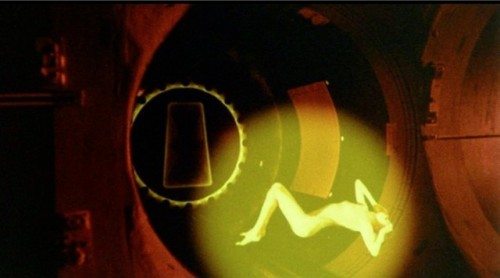 And here’s a wee bit of the alien abduction