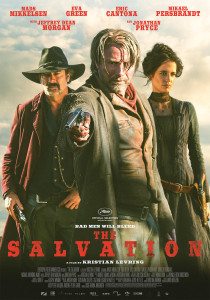 Westerns weren’t always bleak and existential. They used to be about heroes and damsels in distress and bad white actors with feathers in their hair whooping it up as evil Indians. Then came the ‘60s, and, more often than not, out went the Indians, white or otherwise. Sergio Leone and Monte Hellman and Clint Eastwood et al. came along and turned the western gaze inward. Westerns were no longer about the empty west; they were about the empty souls of the men living and, more often, dying there.

Dutch writer/director Kristian Levring tries to capture the western vibe of the late ‘60s/early ‘70s with his new movie, The Salvation, a revenge story set in the American west of 1871 (though shot in South Africa). He trots out every cliché in the western book, but in the end, that’s about all he trots out. The Salvation never rises above imitation. 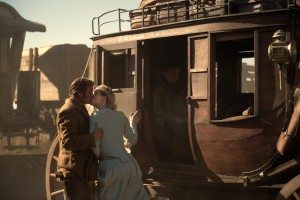 Don’t git on that thar stage, ya dang fools!

Mads Mikkelsen (lately of the TV show Hannibal) stars as Danish settler Jon, who seven years earlier moved to the States with his brother, Peter. As the movie opens, Jon meets his wife and ten-year-old son at the train station. Finally, they’ve come from Denmark to join him! Hooray!

Only wait, sorry, his wife (Nanna Fabricius AKA the singer Oh Land) is only on hand to be raped and murdered, and his son to have his throat cut. Which happens in the next scene during a rather unpleasant stagecoach ride.

The rapist/murderers aren’t bright enough to park the stagecoach very far from where they kick out Jon, so without any trouble he runs after them and shoots them dead just after they finish with the raping/murdering. 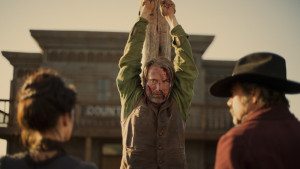 Going back a second, in the stagecoach Jon gets the drop on the baddies, his drawn gun pointing at their heads. He then has his son pick up from the stagecoach floor the dropped gun of bad guy number one. Why? What’s wrong with it on the floor? Why are you telling your son to go over there where the killer is? Isn’t the killer just going to grab him and put a knife to his throat? Yes. Yes, he is.

I didn’t buy this movie from the outset. I wanted to. It has all the tropes one is used to. It seems like it should work, at least in a fun, B-movie revenge flick kind of way. But it never feels right. It wears like faux snakeskin cowboy boots. 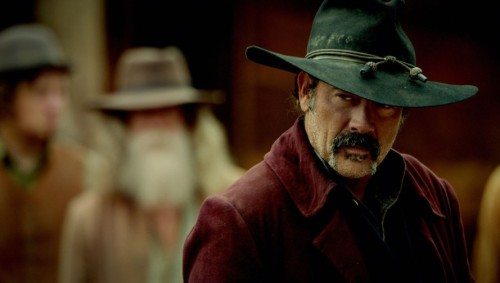 Turns out one of the rapists is the brother of evil bad guy Delarue (Jeffrey Dean Morgan), whose gang has a whole town in their control. Jonathan Pryce plays the cowardly Mayor/undertaker, who just wants to make some cash and be left alone. He lets Delarue do whatever he wants. Such as shoot old ladies and cripples out of spite.

Delarue’s dead brother’s wife is Madelaine (Eva Green), whose tongue was cut out by injuns as a little girl. She’s the one character I liked. Not saying anything gives characters so much power, it’s a wonder more filmmakers don’t shut their players up. With her single expression and silent tongue, one isn’t sure whose side Madelaine is on until she makes her play. 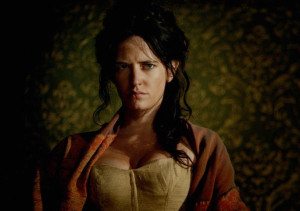 Plot-wise, you know the drill. Delarue goes after Jon, almost does away with him, when, lo and behold, the tables are turned. And a la every past cinematic man wronged by killin’, Jon comes stormin’ into town with hat and rifle and shoots the almighty hell out of everyone.

Not caring about anyone in the movie gave me plenty of time for my mind to wander, but I had a hard time putting my finger on why the movie so failed to connect. Something about heart and the movie’s lack of it. It’s all imitation without any honesty. Characters like the wife or the scared sheriff feel like little automatons plunked in the movie to be of service rather than to be human.

Delarue, it turns out, is slowly buying up property for some kind of banker’s consortium. Why? Because there’s oil in that thar desert, and oil figures to be worth some money one day, they reckon. Only the oil angle feels tacked on. It’s not integrated with the revenge story at all. Is oil murder? Is that what I’m supposed to get out of this? It’s hard to say.

The cinematography endeavors to capture the dusty widescreen frames of yore, but the films of yore had a distinct advantage: they were films. The Salvation is of course shot digitally, and looks it. I suppose it’ll seem nice enough on your TV, but blown up on a movie screen it’s typically lacking in depth or power.

If you want to want to watch a classic revionist western, but are having trouble mustering the will to make it happen, check out The Salvation. It will disappoint you just enough to push you over the edge. 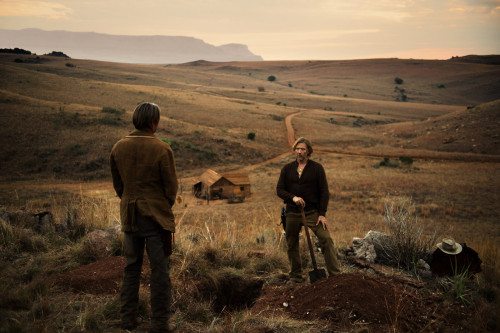 Looks nice at this size

One response on “The Salvation: A Danish Western Yearns For That Old Timey Eastwood Revenge Vibe”