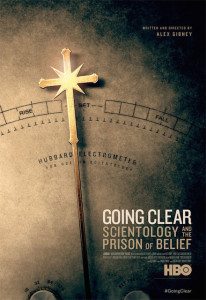 Let’s just say you’ve been living in a locked, windowless room for the past decade, which — if you’re a member of the Church of Scientology (which is a church according to the IRS, at least) — may not be far from the truth [or, for that matter, your imprisonment may be the literal truth, if such incarceration was ordained by L. Ron Hubbard himself {or, at least, L. Ron Hubbard’s Operating Thetan Level IX disembodied spirit, which appears to be just as paranoid and insane as the man himself, regardless of how much auditing its been through}]. In any case, sentence structure aside — this room, metaphorical or not — if you’ve been locked in it, then the revelations about the Church of Scientology that are placidly and reasonably expounded in Alex Gibney’s HBO documentary Going Clear may scare the stupid out of you.

They certainly should. What need could you possibly have for being stupid anyway?

Most likely, however, this solid but uninvigorating documentary will simply reiterate what you’ve learned elsewhere; to wit: you do not really want to get involved with these jokers.

For Scientologists have made going around the bend a lucrative art form.

This much has been clear since their goons, and lawyers, and money failed to stop the truth of their ‘religion’ from reaching the public’s ears. As usual, we have South Park to thank for our collective communal growth. That show’s ninth season episode Trapped in the Closet (2005) had Scientologist elders explain the secret underpinnings of church doctrine to Stan, as below:

Much the same is revealed in Going Clear, only in slightly more detail and with different graphics that are no less derisive.

Up until Trapped in the Closet, knowing how nutsy-cuckoo Scientologists were was more a matter of instinct for many of us. This vague unease we shared about a so-called church that violently squelched criticism; that soaked its parishioners for every tarnished penny they had squirreled away in the sofa cushions; and that stopped you on the street, repeatedly, to helpfully explain how you were broken in a way only they could fix… well, it made one wary.

But then, if you investigate the core beliefs of any faith-based religion, you might find them also hard to swallow. Faith is its own reward, if people who have faith can be believed. Faith isn’t much explored in Going Clear, except insomuch as it is denigrated by those that have lost faith in Scientology.

Going Clear, based on Lawrence Wright’s book of the same name, starts at the beginning and methodically ruins Scientology without mercy. With a young LaFayette Ron Hubbard, we lie about our wartime exploits. We dabble in the dark arts. We kidnap our child and tell her mother we’ve butchered her.

Then those same charming personality traits give birth to Dianetics, which in turn sparks Scientology. If you don’t know any of this stuff, you should. It gives me no pleasure to pooh-pooh the beliefs of others — no matter how stupid they are (the beliefs, or the others) — but that’s the Achilles heel of Scientology.

You most likely would not be surprised, in comparison, to discover that the Pope believes Jesus to be the son of a virgin and of God, and that Christians believe that Jesus reincarnated after a fairly definitive death. That’s because none of that information is a secret it takes you years and thousands of dollars to uncover. It’s right there in the bedside table of your hotel room and plastered to the wall of the building and everywhere else you look.

Christians, to generalize grossly, say: ‘If you care to believe this unprovable thing, than we have other things that you might also be glad to believe.’ We believe that believing these things can help you live a satisfying life in a welcoming community, and both those things are significantly more provable.

The same could be said about any religion that posits something unprovable — which includes most of them. Even Buddhists believe in nirvana although none of us have reached it.

But Going Clear takes Scientology as its target, much as The Book of Mormon, also by the South Park guys, Matt Stone and Trey Parker, takes on the Church of the Latter Day Saints — another new kid on the block, religion-wise. It is easier to poke holes in a new faith, one that does not have centuries of tradition behind it, than in an old one.

In The Book of Mormon, Mormans are lampooned, but also included. The message ends up being, whatever helps you get through the night. So why is not the same for Scientology?

This Going Clear attempts to illuminate by disproving the conceit that Scientology is a religion to begin with. It does an admirable job. High-ranking church members voice their regrets and their shame, now that they’ve left and been excommunicated (or detatched, in church lingo). They talk about the abuse they suffered, and the abuse they meted out. Tom Cruise is given a particularly harsh talking to and made to look an absolute fool, which he may well be.

Oscar winning director and writer Paul Haggis makes the documentary’s most compelling subject. He sits there, chagrined, to explain why and how he was taken in and why and how he woke up. But then, unless you’ve been locked in a windowless room for the past decade, you probably read the letter he wrote when the left the church and which was republished in hundreds of periodicals in 2009.

And perhaps you’ve also seen Paul Thomas Anderson’s The Master, which is a thinly veiled fictionalization of L. Ron Hubbard and Scientology. (And the video posted above collects a few clips from Steven Soderbergh’s Schizopolis, which isn’t about Scientology and is.)

So watching Going Clear isn’t so much an exposé. It’s more of a talking to. After soaking in its detail and its reason, one feels frustrated. Why look for grand conspiracies in the assassination of John F. Kennedy or in 9/11 when here is one before us, begging to be unmasked, its purveyors publicly excoriated and incarcerated?

That is what Going Clear is good for — assuming you haven’t remained thus far shockingly unaware. It is a mass-market document, easily accessible, compellingly irrefutable, and potentially powerful enough to overcome our inertia.

Do you work for the IRS? The government of the United States or any other country in which Scientology abuses the weak and gullible and, in return, devours resources like a swarm of nuclear-powered army ants?

Maybe now is a good time to show these bums the door? Let us all wipe our hands and take this moment to commit to going clear.