Since time immemorial humankind has endeavored to smuggle drugs into the United States, mostly inside of dolls. I would explain why this is the case, but it is a no-brainer. 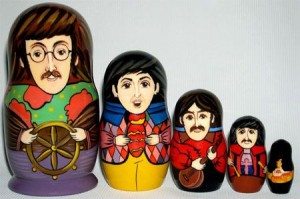 A yellow submarine inside us all lives.

I mean, what else are you going to put inside of your doll? Another, smaller doll?

That’s too meta. Plus, everyone loves heroin.

Unfortunately, while getting your narcotics into a doll is relatively simple, and slipping a smacked-up Barbie past those dolts at the border is — wait for it — child’s play, where this diabolical scheme most often falls apart is during the attempt to find the damn thing once it’s actually arrived.

I mean, you can’t just go around tearing open ever single doll expecting to find a fortune in narcotics. Believe me. I’ve tried.

To prove my point: two films, both of interest, both peculiar, and both starring a doll with horse jammed up its butt. 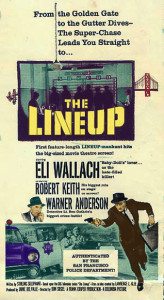 Before Don Siegel made Dirty Harry and all those other great Clint Eastwood films; before he made Invasion of the Body Snatchers — one of the best horror originals of all time — he made a nasty little-seen noir called The Lineup.

Like Kurosawa‘s High and Low, this is a detective film of two parts, inter-cut. Half follows the staid, Joe Friday-type investigation of Lt. Guthrie (Warner Anderson), as he attempts to uncover a ring of murderous drug smugglers, exposed by the car crash that starts the film with a wallop. This half of the equation vaguely resembles a ’50s television show of the same name (and an even earlier radio program). The cops and clues stuff exhibits Siegel’s eye for compelling tableau, but doesn’t sparkle much, story-wise. One of the film’s producers wanted a hit along the lines of the Dragnet films of the 1950s and thought—just as many producers do today—that linking this picture to an established property would be good for business. 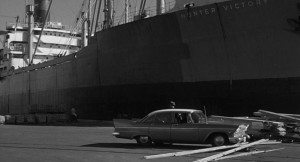 Siegel knows how to compose a scene.

As one of the victims asks, in The Lineup‘s other, far more interesting half:

Siegel’s film, from a script by Stirling Silliphant, isn’t much like the now-forgotten show anyway. Many of the property’s main characters don’t appear and the ones that do, such as Guthrie, get eclipsed by the The Lineup‘s sadistic, psychopathic villains. This is unsurprising as those bad men are a young Eli Wallach and less young Robert Keith. 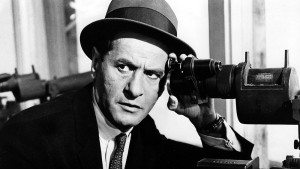 Wallach plays Dancer, a brutal, ugly assassin who’s paired with Keith’s Julian—the sort of man who collects people’s last words in a little book he carries around. Together, the pair is tasked with rounding up heroin which has been unwittingly smuggled into San Francisco inside various objects, including, natch, a doll. While Guthrie follows his clues towards Dancer and Julian, Dancer and Julian stalk their prey. And they are quicker.

These are the sort of men who feel disinclined to leave loose ends alive.

As The Lineup progresses—violently, particularly for the period—Siegel wrings a truly unsettling performance from Wallach. It is a role the actor later said he regretted taking, but one that leaves me with zero regret. Here we have the progenitor of a type that, watered down or over-played, litters today’s screens like racy fliers litter the streets of Las Vegas. Dancer is among the original cinematic psychopaths and serial killers and he is as wretchedly delightful as Wallach can be. So, too, is Julian repugnant in his contrasting way, with his tuneless humor and macabre hobby. 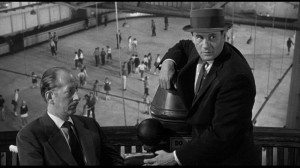 But, alas, all is not well in the world of the wringers of life. When the duo attempt to retrieve their final parcel, they discover that the young girl who carried the doll found the surprise stashed inside. Naturally, she assumed that the white powder was make up and used it to dust her doll’s face.

Oops. Try explaining that one to your drug cartel employers.

The Lineup ratchets up its gears. The hunters realize the unlikely nature of their situation and suspect—rightly so—that their employers will lay the fault for the missing product at their feet. What to do with this empty doll; with this woman and her child; with this dubious happenstance upon which their reputation and lives now depend?

How about, perhaps, an automobile chase? Yes. Excellent idea! Especially as we’re in 1950s San Francisco, Bullit has yet to break the map by speeding up one hill and down another, and the Embarcadero Freeway is under construction. From the Cliff House to the Bay, our boys seek their escape. Even though much of the tire squealing here is done in front of a projection screen, The Lineup‘s chase sequence easily finds a slot among the best of all time. 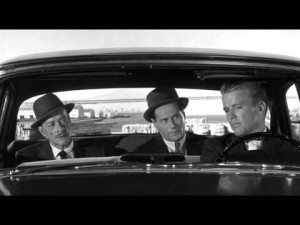 You will not be disappointed. Except, perhaps, in all those other chase scenes you thought you loved and which you must now re-evaluate.

I will not spoil the film’s grand finale except to say that when Sandy (Richard Jaeckel, here doubled by stunt man Guy Way) finally skids to a halt, his car full of passengers, at what can only be called the end in every sense of that word, the only trick is that someone was actually insane enough to perform this stunt. Way’s girlfriend, doubling for one of the other passengers in the car, was hysterical for days afterward. Who could blame her?

And then there’s the bit with the fellow in the wheelchair and the nuns. Also well worth your time.

Don Siegel doesn’t get the plaudits of recognized masters such as Howard Hawks and Billy Wilder, but for my money, he’s being short-changed. I think you should watch The Lineup and see what you think. 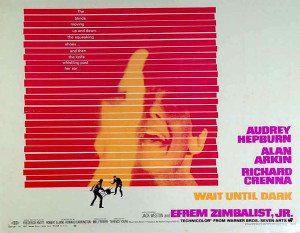 After some nasty ’50s noir, what goes down smoother than a dash of ’60s melodrama? Not convinced? What if I told you this one stars Audrey Hepburn as a blind woman and Alan Arkin as a pseudo-beatnik psychopath?

I thought as much.

Naturally, Wait Until Dark starts with a little bit of drug smuggling. A woman, Lisa (Samantha Jones) has heroin sewn inside a doll—how original!—and attempts to smuggle it back to New York. This all goes swimmingly until, disembarking, she notices she’s being watched by an unwelcome accomplice. She foists her drugged-out doll on an unwitting photographer (Efrem Zimbalist Jr.) and plays dumb when she’s whisked away. 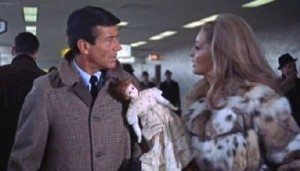 Pardon me, stranger, would you mind holding my exceedingly ugly doll?

Prologue past, Henri Mancini’s score soars into action. It, like much of the acting style on display here, has not aged well. Wait Until Dark feels dated, and stagey. This is unsurprising, as it’s based on a play of the same name. Still, the film is compelling in its own lopsided way.

Lisa later calls up her photographer patsy to reclaim the doll, but he can’t find it. Egads! Seems that he’s preoccupied, mostly with his wife Susy (Hepburn), who lost her vision in an accident not so long ago. Through a series of events that can only be described as unnecessarily complicated, Lisa’s hijacker, Harry Roat Jr. (Arkin), reels in two of Lisa’s old con-men pals—Mike (Richard Crenna, of First Blood fame) and Carlino (Jack Weston, who oddly also played a Carlino in The Thomas Crown Affair)—to pull the old switcheroo on Susy. 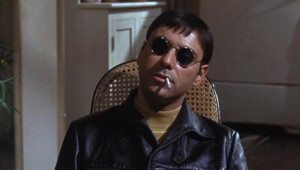 Her husband lured out of town on pretenses false and floppy, poor, newly blind Susy must hold her own against a trio of ne’er-do-wells. They want the doll, or more specifically the heroin stashed inside said doll. The doll is frankly pretty ugly and worthless.

Susy, on the other hand, wants to stay alive through an increasingly dire set of circumstances. 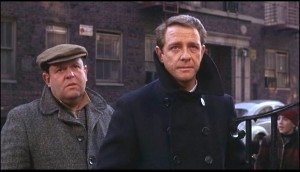 What this situation calls for is a number of costume changes.

For the most part, Wait Until Dark plays out like a goofy caper picture with a mean streak. What makes it stand out—and worth watching—isn’t Audrey Hepburn’s performance, for which she was nominated for an Academy Award (losing to Katherine Hepburn, of all the luck), but rather Alan Arkin’s. Arkin is as likely a psychopath as Shirley Temple. He swans about in dark, round sunglasses, wielding a switchblade hidden inside yet another doll. He, as part of this mentally deficient con, plays different roles in different disguises like a low-rent Eddie Murphy.

Hello. Lady is BLIND. You can skip the fake mustaches, brainiac. 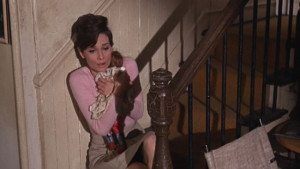 Crenna and Weston give good shtick and set Hepburn up to wail and wring her hands dramatically whenever possible. Hepburn obliges, as the audiences of the day surely appreciated, but she also calls up an awful lot of backbone for a lady who can’t see and who weighs about 93 pounds with her pants on. Seriously. That woman needs a sandwich inside of another sandwich.

But Wait Until Dark. Is it good? Well, not really. But it is not good in an interesting, enjoyable way. And films like these must be watched in the name of science.

Come for the heroin. Stay for the, uh, the heroin? If you can find it? Maybe it’s inside a doll? Seems likely.

Now where did I put that damn thing…

One response on “Mind-Control Double Feature #106: Now With Twice the Heroin”