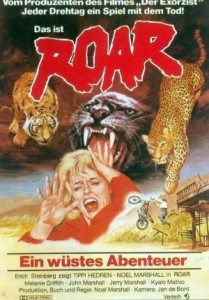 Every now and again you see a stunt in a movie and think, my gosh but that looks dangerous! Not so much these days, when we have “rules” and “regulations” and “greenscreen soundstages” and can’t go around endangering actors’ lives. Much. But in days of yore, regulations were less strict, and CGI non-existant. Sometimes actors and crew got hurt. And sometimes, yes, a scene pulses with real-life risk to life and limb.

Roar, a little seen movie from ’81, newly restored and released by Alamo Drafthouse, consists only of risk to life and limb. Literally. There is no story to speak of, no real characters, no real drama, other than the drama of 150 lions, tigers, jaguars, leopards, and cougars chasing, jumping on, licking, hugging, and otherwise terrorizing and/or playing with the actors.

Is it a good movie? I don’t even know how to answer that. I mean mostly I’d say no, it is not a good movie. But can you stop gaping at it? You cannot. 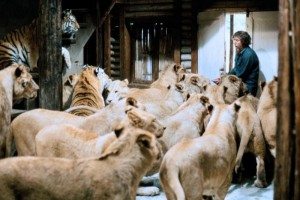 There is nothing at all safe about any interaction between the cats and the people in Roar. Almost everyone involved in the film was injured, some seriously, including cinematographer Jan de Bont, who was essentially scapled, and needed 200+ stitches to repair his head. Some of the injuries are visible in the movie, as when lead actor and writer/director Noel Marshall is bitten on the hand by a lion. He finishes the scene, blood flowing.

Marshall’s co-star and real-life wife, Tippi Hedron, fractured her leg falling off an elephant, and a lion bit open her head. Hedron’s real-life daughter, Melanie Griffith, plays their daughter. She only needed 50 stitches on her face and plastic surgery to put her back together.

Marshall’s two sons play his two sons in the movie. They too suffered various kitty bites and whatnot. As for Marshall himself, he suffered so many injuries it took him years to recover. 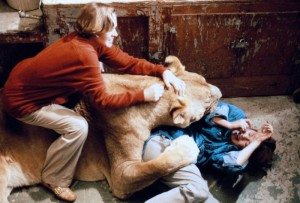 Please do not eat my family

So Roar is essentially a home movie that cost $17 million and took five years to shoot and almost killed everyone involved in making it. It was filmed using the big cats Marshall and Hedron had been collecting for years from zoos and circuses. Marshall wrote a script, but I can’t imagine there was much to write. And what he did write changed depending on what the cats felt like doing. You can train big cats to do a few things, but they’re cats; they get bored; and then they do something else. Like eat you.

Marshall plays Hank, a guy living in Africa who’s trying to do mumble mumble with big cats, including those not native to Africa. (A tiger? In Africa?) He tumbles around with the cats for awhile, when two small boats arrive carrying mean men who want to kill these dangerous predators. A tiger attacks them. They row away. (Two of them return later, but don’t worry, a lion eats them.)

They’re so cute when they’re playing!

Meanwhile, Hank’s family is on their way from Chicago to see what’s up with Hank’s African adventure. But when they arrive at Hank’s place, he’s gone! Rats! Or, rather, lions! Everywhere!

Pretty much the rest of the movie has Hank’s family kind of running around the big enclosure, terrorized by cats, and not really doing anything to get away or keep safe. One of the boys rides away on a motorcycle to get help, but elephants chase him back. People keep falling in the lagoon and stuff. Lions crash through doors and leap on everyone.

It’s all rather…strange. I mean story-wise. It’s just people flopping around with and running away from cats. 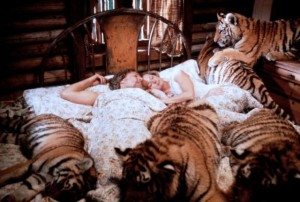 Finally the family falls asleep in some room they figure the cats won’t find them in? Um, sure. They awake to find the room filled with sleeping cats. And just like that, everyone loves the cute kitties. Hank shows up, and to the strains of the dopiest song you’ve ever heard, we see a series of shots of family members canoodling with cats.

No one really plays a “character,” since no one does anything but run around yelling at lions and tigers. There’s no human drama. There are no real performances. Aside from Hedron and Griffith, no one’s really an actor. (Insert snarky Melanie Griffith comment here.) The best scene is one where Hank talks to a young lion just lying around, unwilling to go where Hank wants her to go. She roars at him as if speaking, as if they’re having a conversation. It’s pretty neat.

If you want to see something you’ve never seen before, and if that thing is 150 jungle cats leaping on people, you will want to see Roar. It is surely a unique oddity.

Damn. Should have closed the door.