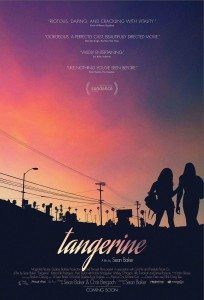 There is something absolutely brilliant about Tangerine, Sean Baker’s slice of life drama about transgendered sex workers, but it’s a quiet kind of brilliant that I hope you don’t notice. It’s got nothing to do with the film’s technical achievements — being completely shot on an iPhone 5s — or its slim budget. It’s got everything to do with the grace and, I presume, honesty with which it treats its characters.

Tangerine follows Cin-Dee Rella (Kitana Kiki Rodriguez) as she, just released from jail, tries to track down her boyfriend / pimp whom she hears has been cheating on her with a ‘fish’ — that being a woman who, unlike Cin-Dee, was born a woman. As Cin-Dee tornadoes around Hollywood in search of Chester (James Ransone; aka Ziggy from The Wire season 2), her bestie who’s spilled the beans, Alexandra (Mya Taylor), alternately helps, hies, and tries to drum up an audience for the performance she’s putting on in the evening. Also primary in the mix is Razmik (Karren Karagulian), a married Armenian cab driver with a thing for Cin-Dee and a budget for transgender sex encounters.

If that sounds like it isn’t for you then you are both undervaluing Tangerine and yourself.

This is because Tangerine isn’t about being transgendered or sex work or what is normally seen as the seedier side of Hollywood. It’s about people — real people with real lives and real actions and real reactions — who just happen to be not the sort you normally see standing tall on cinema screens. Even in Oscar contender The Danish Girl, what one gets is an upper crust, groundbreaking transgendered woman (Eddie Redmayne) whose gender is the subject of both the film and fascination. And then, well, there was Boys Don’t Cry? The Crying Game? All films which make their trans subjects the exception instead of just another norm. 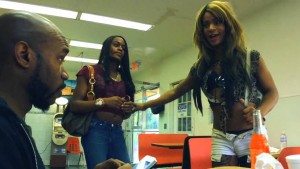 No other film takes you by the hand and leads you down to Sunset Boulevard so you can sit down for donuts with Cin-Dee and Alexandra and those that eddy around them. Theirs is a life that likely isn’t akin to yours, but that doesn’t make it any less of a life — and that’s part of Tangerine‘s achievement. Very quickly you stop thinking about these characters as objects of rare occurrence and instead begin to simply be with them. Cin-Dee is no paragon of interpersonal skills, but her anguish at being wronged by Chester isn’t amusing, or displayed for your amusement. Alexandra’s dreams won’t change the world, but their actualization may come to mean something to you. Razmik’s predicament — and in connection that faced by his family — becomes as tangible in Tangerine as the vomit that L.A.’s entitled leave in his taxi. 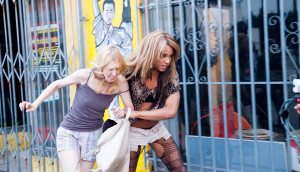 And then there’s also the fish, Dinah (Mickey O’Hagan), literally dragged from her place of business to be rubbed under Chester’s nose. On Christmas eve, when all this takes place.

It’s a Tom Waits song or a Bukowski novel. It’s a tale that makes you feel and care and know subjects normally considered too marginal for your attention. And why should these people be so occluded? We cannot all be George Clooney or Scarlett Johansson, even with surgery.

The acting in Tangerine is unpretentious: the definition of good acting. The streets of Los Angeles shine with all their colorful griminess even captured on a smartphone’s camera. The film’s script and direction and score all unite towards one simple, successful goal: to bring you in.

And that brings me to the brilliant bit, which I would suggest you not read about if you haven’t yet seen Tangerine and perhaps even if you have. Having it brought to your awareness will not make the film seem better than it already feels, in the same way that having a magician reveal his or her trick does little to improve your sense of wonder.

At the end of Tangerine, after much drama, Cin-Dee finally brings Dinah to Chester in confrontation. It is revealed that Chester and Cin-Dee are engaged and that, yes, Chester has been fucking Dinah and others. He is a pimp and not in love with anyone else and that’s enough explanation for him. What also gets revealed is that among the others Chester bedded, while Cin-Dee was locked up, was Alexandra.

Alexandra, the best friend, who started our story by telling Cin-Dee that Chester was a cheat — just not with her.

When this betrayal comes out, with its associated pain and anger, Chester steps back saying something like, “This is some girl shit, here. You two ladies figure it out and let me know when you’re done.” Cin-Dee storms off devastated with Alexandra apologetic in her wake.

This is brilliant because no matter who you are and what you may have secretly thought before Tangerine started screening — I’ll bet that you never even considered challenging Chester’s statement when it was pronounced. 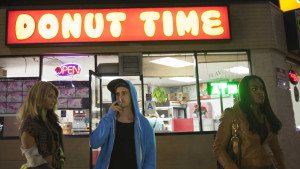 It is some girl shit, because Cin-Dee and Alexandra are female in Chester’s eyes and in their own eyes and in your eyes and, also, in reality — genitalia offering no serious counter argument. The scene plays out and you are there with them, concerned not with issues of transgender identity or sex work or race, but with people you know. With women you know.

When Tangerine comes to a close, Cin-Dee has been drenched in piss. Alexandra pulls her off own longhair wig as a replacement, in penance, and the pair recovers in a laundromat. At this moment, for the first time, we see the pair au natural and come face to face with the extra challenges that their lives entail, every day, even Christmas.

And you feel for them, as you do for people you know.