It is frequently difficult to motivate to see challenging films. While you suspect they’ll be — over the long term — more rewarding than whatever Jason Statham is starring in next, it’s easier to shell out to watch an oiled ex-professional diver snarl and prance than it is to watch a story about a woman locked up in a garden shed for seven years. 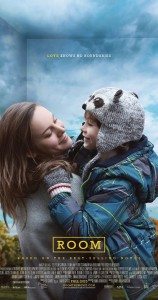 Luckily, Lenny Abrahamson‘s film Room only seems like it’s about a woman locked up in a garden shed for seven years. It’s really about going out of your mind, in the best possible way.

Yes. In Room Brie Larson‘s Ma has been imprisoned and in that prison she has conceived and bore a son, Jack (Jacob Tremblay) — now five years old. Jack has never left ‘room’ and, when the story starts, does not understand that there is a wider world. All he has ever seen is a small patch of sky through the skylight above. Everything else is in room, on the television, and in his imagination.

For Ma as well, the outside world has become a place of fantasy. She knows it exists but her physical prison has corrupted her thoughts and left her intellectually and emotionally trapped. That is how Room starts, with Jack wishing the meager contents of room a good morning — the wardrobe, the toilet, the snake made of egg shells, the melted spoon. Jack greets the implements of his prison with cheer for Jack is not a prisoner. 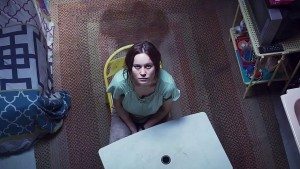 To be a prisoner, one must first recognize the prison. And that’s what Room is about: recognizing the prison, breaking free, and the searing intensity to which that freedom is wed. Saying this isn’t a spoiler — Lenny Abrahamson has clearly communicated through all possible mediums that Ma and Jack escape room; that this film, written by Emma Donoghue based on her novel, isn’t a thriller about if they escape. They escape. Room isn’t even about how they escape. It’s about the process of becoming free and, as such, as strange as it may sound, it is hugely uplifting. 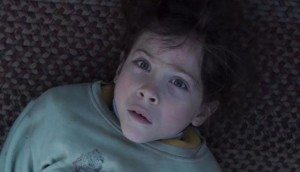 This film, about captivity and psychological torture, is ecstatic — assuming you understand that ecstasy requires complete loss of control and, with that, the terror of free fall. Room has within it one of the most powerful moments cinema has ever offered me, and it is nothing more than a shot of a cloudy sky and a boy’s face.

Here is the world, Jack, to which Ma has brung you.

Room can be traumatic, and that’s deliberate. Abrahamson understands the lessons of Exodus — to be truly free, we must first recognize our slavery. We must wander, lost, in the desert until maybe, if we persevere, our children grow with no memory of the shackle or the whip. 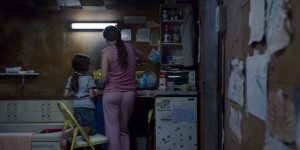 Brie Larson and Jacob Tremblay deserve the awards for which they are being nominated. It is their film from start to finish and there are no missteps, even with Tremblay being all of seven years old.

You will watch Room, if you can spare a night away from Statham, and go out of your mind. Not with insanity, but with a clarity able to smash through the concrete barriers that make us uncomplaining prisoners. Because we are inured to them. How big is the world? It goes all the way to the end. And then, like all walls, you will find that there is something else, something equally as real, on the other side. 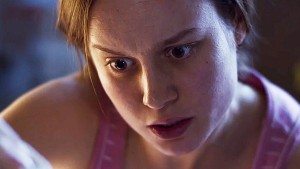 To break through, suggests Donoghue in Room, what we needs is love. Not the corny love that saves the universe in The Fifth Element or the transcendent love that heals fractured souls in Silver Linings Playbook. Instead, we need the unconditional love of family. We need the love that sacrifices its own strength on behalf of the other, regardless of peril or pain and even because of it.

Don’t be afraid to see Room. It will make you cry, but not with anger. Those are the tears of yearning and growth.

2 responses on “Watch Room & Go Out of Your Mind”