The Marvel movie machine, in all its forms, moves inexoribly forward, adapting, remaking, and rebooting superhero after superhero to the point they’ve all been squished together into one giant, bland, undifferentiated CGI blob of ear-splitting colors and eye-blinding noise. Or so it seems to me. Even the best of Marvel’s endless string of no-ending, no-beginning chapters in what feels like a single movie guaranteed never to wrap up has left me saying little more than, “well, that one had some good bits, anyway.”

And now this new Spider-Man cartoon movie arrives, a movie I’ve paid zero attention to, figuring in passing that it must be some TV special or breakfast cereal tie-in, and it’s billed as yet another Spider-Man origin story, which, if I may mix my Marvel and DC metaphors, is my personal Kryptonite, but it was a rainy afternoon and a beer sounded nice (thank you, Alamo Drafthouse!), so I bought myself a ticket to the inelegantly named Spider-Man: Into the Spider-Verse, drank my beer, and watched it.

It’s the best Marvel comic book movie anyone’s ever made. 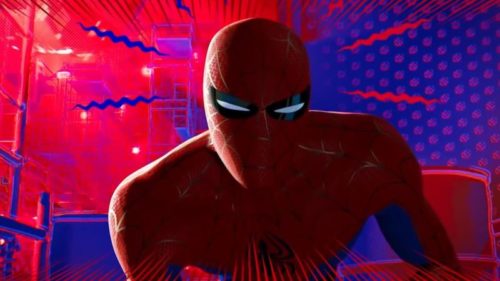 It’s exactly the kind of movie I’m always wishing people would make, the kind I see no reason we have to be forever without. It’s loud, it’s fast, it’s an origin story, it hits all the beats every one of these explodey, eyeball-blasting movies hits, but—and my what a big but it’s proven to be—it’s neither boring nor stupid. The characters feel like real people. The emotional stakes aren’t contrived. Best of all, it’s not animated with CGI to look “real.” It’s animated to look like the pages of an exceptionally bananas comic book.

Dr. Strange was hailed as having uniquely psychedelic imagery (by no less a curmudgeon than me), but even that, as I put it then, came across as a corporate acid trip, even that was just another Marvel movie with a few good bits. The Spider-Verse is far trippier, far more imaginative, and far more fun. It’s a genuinely good movie.

The story it tells is your basic comics interpretation of the many world hypothesis (or, by this time, hypotheses, as folks sure love making up untestable hypotheses about infinite universes), whereby some baddies make a machine to access them (the infinite universes), do so, and accidentally invite a bunch of alternate-universe spider-people to our reality. 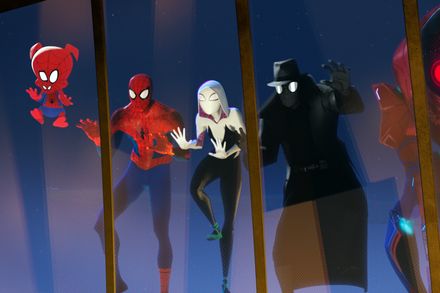 A few friends drop by

Which reality, ours, includes a really swell Spider-Man, the Peter Parker we know and, frankly, are by now thoroughly bored by, but good news! He gets killed (spoiler warning for previous half of this sentence) and we get introduced to Miles Morales (Shameik Moore), a half Puerto Rican, half African American teenager, who, somehow, despite this being a giant studio animated movie, doesn’t come across as annoying and contrived. He’s actually a lot like a teenager. Crazy times we live in, folks. He even speaks Spanish now and again, sans subtitles, like it’s just something normal one does.

Stop me if you’ve heard this one before, but Miles is bitten by a spider (not a radioactive one, by the by, it’s some kind of robot spider, or genetically designed super-spider, stamped with the name of the very evil corporation Miles goes up against, which the origin or intended purpose of this spider is never explained (unless I missed something?), so I’ll just assume all you comics readers know what’s up and will come to my rescue in the comments).

Miles gets a little web training

Miles gets superpowers, hilariously so, meets a girl, freaks out, and before you know it, the fabric of space-time is torn asunder, and one by one, Miles meets a bunch of weird-ass, alternate universe super-spider freaks. These include an alternate Peter Parker (Jake Johnson) of the chubby and grumpy variety, teenage girl Gwen Stacy (Hailee Steinfeld), Japanese futurisitic youngish girl Peni Parker (Kimiko Glenn) and her trusty giant robot, the black & white, ‘30s-esque private eye Spider-Noir, and a goofy cartoon pig named Peter Porker (John Mulaney), who’s very existence is a far sillier gag than ever makes it into one of these movies.

The Spider-People are improbably delightful. It helps that Spider-Noir is voiced by Nicolas Cage and that he basically resembles a Rorschach rip-off (and when he gets his own spin-off movie, and Cage insists on Herzog directing, there will be much rejoicing). 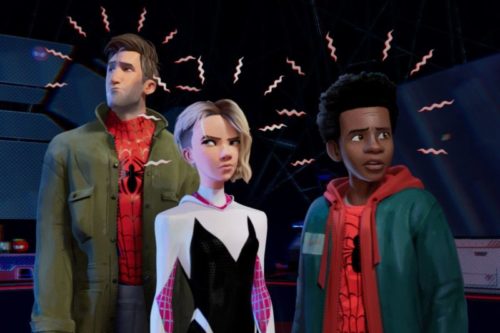 The animation, then. It’s something else. It unfurls in a non-stop, psychedelic freak-show of bubbling, flashing, swirling imagery, incorporating comics panels, words, and some of the trippiest alternate-universe-scapes this side of 2001. Why anyone would prefer live-action Marvel movies to this is beyond me. Those movies look fake. This one looks purposeful. It’s a fantastically important distinction.

But does ye olde Spidey-Verse have heart, you ask, you softies, you? Yes. It does. And it’s heart that works without resorting to maudlin bullshit. The message of The Spider-Verse is that anyone can be a superhero. Maybe that’s been the message of every iteration of Spider-Man. It’s surprising only in that having it delivered with characters as good as these, with Miles leading the way, it doesn’t come across as forced or banal. It comes across as a simple truth. 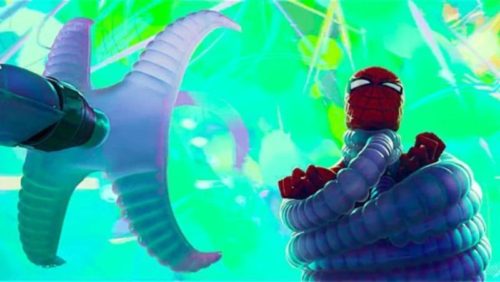 Spidey in a spot o’ trouble

One response on “Spider-Man: Into the Spider-Verse Does Whatever a Whole Bunch of Spiders Can”