Consider this a public service announcement.

Brian DePalma does not make good films. Even at his best, when he’s got a great script (The Untouchables, by David Mamet) and working with talented actors (Sean Connery, Robert DeNiro before he went soft) he’s still pretty much a total hack.

I don’t like to be mean, but there you have it. His movies are terrible. Generally, they are not even terrible in an amusing way. They’re just the same dumb psycho-sexual, late-night, nice-tits, gee-that’s-a-lot-of-blood crap you used to catch on Cinemax after 11:00 pm.

And yet, he still makes films that people go to see. How and why this happens is one of life’s great mysteries.

I hear you. You’re saying: “Dude. Scarface is awesome! ‘Say hello to my leetle friend!'”

Then you mime blowing up a room full of Latino-colored mannequins and stuffing your face into a pile of cocaine.

First: that movie is terrible. Second: having fond memories of something isn’t the same thing as it being good. I bet you also used to like the A-Team. Third: go watch the original Scarface which actually is pretty interesting (Howard Hawks, 1932, Paul Muni and George Raft).

Passion, from the trailer, reminds me of all those other Brian DePalma movies that make me want to drink molten lead. I’m talking about Raising Cain, in which, I shit you not, John Lithgow dresses up as a woman to steal his own child for his mentally deranged fake-dead father (also John Lithgow). Just watch the climax:

Now. Tell me honestly. That scene is horrible and it seems tragically similar to the ‘Odessa Steps‘ rip-off sequence from The Untouchables, right? Right. Everything looks like it is complied from random stock footage. This is what Brian DePalma does. He takes a scenario that has some amount of tension and shoots it like he’s assembling a bookcase from IKEA.

But back to Passion.

This is how the trailer starts. Rachel McAdams seems to be reprising her Mean Girls role as Alpha Female, while Noomi Rapace (who seriously needs help choosing scripts) looks perplexed. And well she should! Because what do we see behind this dialogue?

Uh. It starts with a stairwell. There’s a car. Noomi is sitting at a desk. The two women are on a couch. Then they play patty-cake at a party. This of course sets the stage for a thriller about office parties? Parking tickets? You tell me. I’m pretty sure both these actresses are in the movie, otherwise, it could be anything.

The ticking clock music, too, is as subtle as dog farts.

Yes. We’ve been working together, what, eight months and I don’t even know where you’re from, what you want. 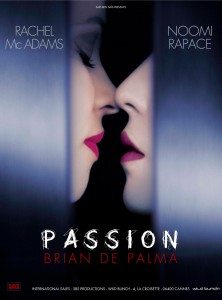 Fine. So we’re all confused. That seems fair.

More stuff appears to happen, but on closer inspection, doesn’t. McAdams and Rapace just keep talking over random stock footage shots of boring people doing boring things. Someone is ironing! The horror! A woman walks into a dark office! Then, dramatically, a drawer is opened to reveal a mask!!!!

Do you think the mask is a symbol of something? Maybe someone is hiding a secret? Like the point of this movie?

It excites you, doesn’t it?

She likes to play games. She likes surprises.

Noomi is talking to a man, presumably her beau as she has forgotten to wear pants. She inspects this mask—which, honestly, looks like something you’d get from one of the Chinese import shops on Mission Street for $2.99. Extrapolating wildly, I’m guessing that mystery man and Rachel McAdams are having mask sex. It’s dangerous and kinky, this mask sex, because, you know, masks. Noomi is threatened and also aroused, because, you know, masks.

What do you want?

Well, I used to want to be admired.

So demanding, Rachel! Maybe you should be content with something simpler. Like a paycheck. They did pay you to be in this movie right? I sure hope so.

There’s some hanky-panky of a distinctly Cinemax style. Will this be rated PG-13? Let’s guess yes. Each shot is as meaningless and disconnected as the one before. Some mood of threat is created, but maybe it’s just dark? Why do they keep showing me a staircase? Who’s wearing the mask? Some guy with a glove on removes a blindfold from Rachel McAdams. We get the above-the-line credits and then… 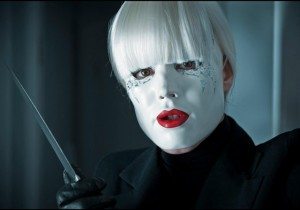 Oh the horror. The humanity. There’s a nice little scream there, over the mask shot, in case your first instinct is to snicker.

This is clearly a film about Anonymous. Or about SARS? I think Rachel McAdams is supposed to be kinky and weird and Noomi Rapace is supposed to be innocent and tempted, so that means, in a Brian DePalma film, that Noomi is actually the sister of her mother’s demented half-cousin’s dental hygienist who dresses up like a monkey butler and kills people for extra rides on the hippity-hoppity.

I admit defeat. I checked the Passion IMDB page. It says, “A young businesswoman plots murderous revenge after her boss and mentor steals her idea.”

Oh. So it’s Working Girl with knives and a mask? Awesome. I’m sure it’ll be much better than Mission to Mars, or Black Dahlia, or any other DePalma film.

The IMDB also says this is a remake of a French film, Love Crime, starring Kristen Scott Thomas and Ludivine Sagnier. Wow. Maybe I’ll have to watch both films in a row sometime just to see how DePalma interpreted the original. I wonder if the original had a porcelain mask in it? $5 says no.

But… fascinatingly, DePalma rips some of the original’s trailer off shot for shot. This is even sadder since the original looks pretty dull and the trailer is lousy (at least the English version).

Prediction: I would be surprised if this even plays in theaters. Maybe I’ll come across it on Cinemax after 11 pm? Do they even still have Cinemax? Probably not. Damn internet ruins everything.