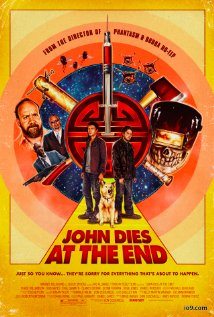 Your dedicated Stand By For Mind Control editors had the chance to see Don Coscarelli’s new movie John Dies At The End a few months back (he of Phantasm and Bubba-Ho-Tep fame), and boy howdy did we ever enjoy it. It seemed insane that it hadn’t been picked up for distribution, a state of affairs no doubt stemming from it being so very good. Can’t have something this imaginative out there, or who would go see The Avengers?

Lucky for all of humanity, John Dies At The End is coming to video-on-demand at the end of December, and to theaters in January. See it in a theater. What sort of movie is it? It’s like if you crossed Naked Lunch with Repo Man and mated their child to Holy Mountain, and mated that child with the offspring of Being John Malkovich and a sort of horror/sci-fi version of Schizopolis as if directed by David Lynch. If you see what I mean. Look, don’t worry about what ‘kind’ of movie it is. This is the whole trouble, this is why it took so long to find a distributor, because “Oh noes! How do we classify this? We don’t know how to market it! Waaaaaah!”

John Dies At The End is insane and absurd and scary and weird, and I’m pretty sure it doesn’t make a damn lick of sense, but it’s so good I don’t care and you won’t either. No doubt we’ll have more to say when it’s released (when we’ll be seeing it again), but for now, check out the newest trailer for it: