What with Halloween on the brain, I can’t help but find myself thinking about zombies eating brains, and so, if you’re still in a cold, wintry, demonic kind of mood, I have for you a fine double feature full of evil creatures bent on your destruction. 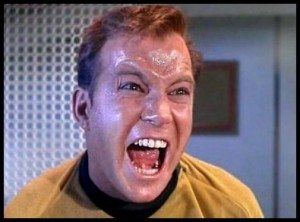 But first let’s talk about writer Richard Matheson. He’s best known for having written sixteen episodes of The Twilight Zone, but he also wrote movies (including Duel, Steven Spielberg’s debut movie, made for TV), and all kinds of TV shows, including Star Trek, for which he wrote “The Enemy Within,” featuring Kirk doing battle with Evil Kirk in one of the more beloved episodes of the show (and, I might add, something of a precursor to a movie I demand everyone watch as soon as possible, The White Comanche (’68), which stars William Shatner as half-white, half Comanche twins, one of whom is a good sheriff, the other an evil Comanche, a movie that culminates with the twins doing battle, both shirtless. I’ll just assume you added it to your Netflix queue before you even got to the end of that last sentence). 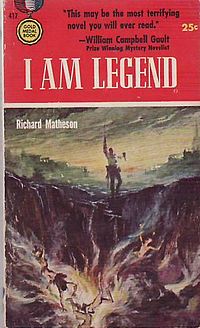 And so anyway, Matheson, he also wrote short stories and novels, including a short novel from ’54 called I Am Legend. It’s a post-apocalyptic story of the last man on Earth after a war and a plague has turned the rest of humanity into, essentially, vampires. The “essentially” is important here, because in Matheson’s book vampirism is explained not as something fantastical or supernatural, but as a disease, an original idea which has since been done to death. So to speak. The last man kills the sleeping vampires by day, and endures their attacks on his home by night. It’s a great little read with a bleak and surprising ending.

I Am Legend spawned three movies, most recently the Will Smith vehicle of the same name (’07). Before that came The Omega Man (’71) starring Charlton Heston. Neither is exactly required viewing. The best adaptation was the first, and it begins this week’s double feature: 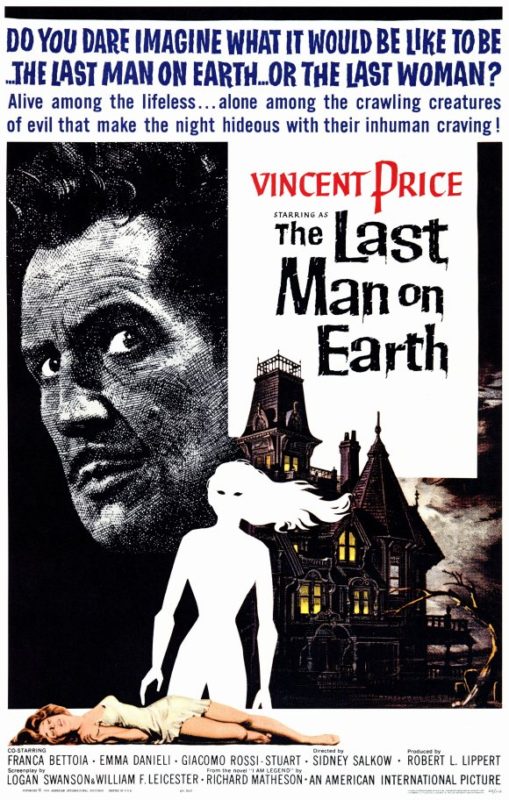 Matheson wrote the adaptation, but for whatever reason decided he didn’t like the finished movie, so used a pseudonym for his credit. The movie differs from the book, but in ways typical for adaptations (time is compressed, long scientific explanations excised, etc.). It maintains a rather grim ending, though it doesn’t have the same meaning for the main character as in the book.

But no matter! Forget the book. The point is, what we’ve got here is Vincent Price as the last man on Earth, fighting off hordes of vampires that to our modern eyes look like a bunch of evil zombies. It’s cheap and exploitative and they shot it in Italy to make it even cheaper, and no one’s ever heard of its two directors, but again, no matter! It’s a moody, weird creation, with a great performance by Price. And it’s the precursor to zombies as we know them today. 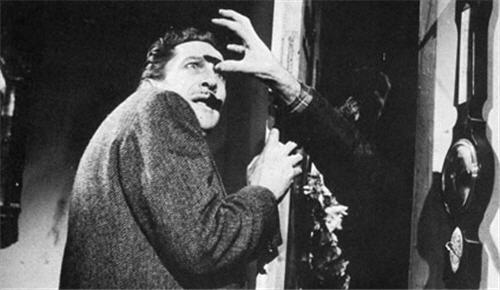 Because it’s not just to our modern eyes that these lumbering, mindless, re-animated monsters clawing at Price’s house look like something other than vampires. Someone else had the same notion watching this movie back in ’64, and that someone was George Romero. Which brings us to our second feature: 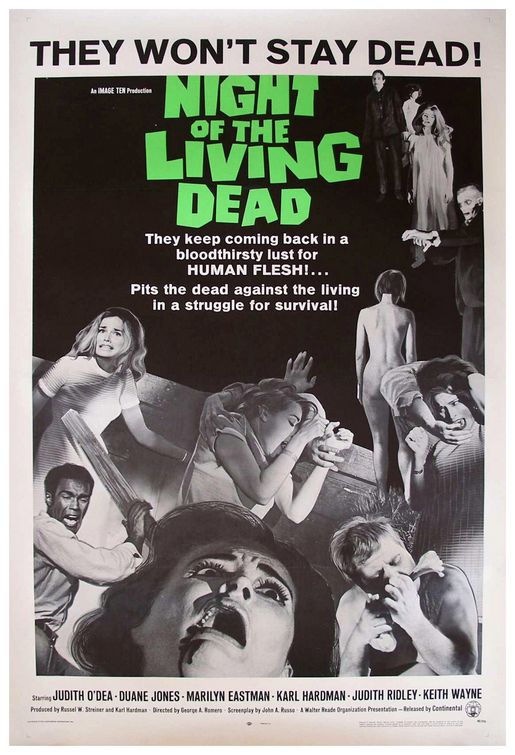 Prior to Night of The Living Dead, zombies did not exist as we know them today. A zombie was a kind of re-animated slave, an automaton who, by virtue of black magic, lived again to do its new master’s bidding. There was no feasting on brains, no transmission of the zombie virus through bites, just eerily blank-faced drones. Technically speaking, a zombie was a religious concept specific to Haiti (if you’re interested in learning about that–and you should be, it’s crazy stuff–read Wade Davis’s great book The Serpent And The Rainbow (and beware of Wes Craven’s nutty, fictionalized movie adaptation of it).

Then Romero came along and thought up something new, a combination of vampires and the living dead. He was inspired both by the book I Am Legend, specifically the virus-like nature of the “disease,” and by the movie, with its images of these monsters stumbling around stupidly, yet who by virtue of their numbers overwhelm anyone in their path. Says Romero:

I thought I Am Legend was about revolution. I said if you’re going to do something about revolution, you should start at the beginning. I mean, Richard starts his book with one man left; everybody in the world has become a vampire. I said we got to start at the beginning and tweak it up a little bit. I couldn’t use vampires because he did, so I wanted something that would be an earth-shaking change. Something that was forever, something that was really at the heart of it. I said, so what if the dead stop staying dead? 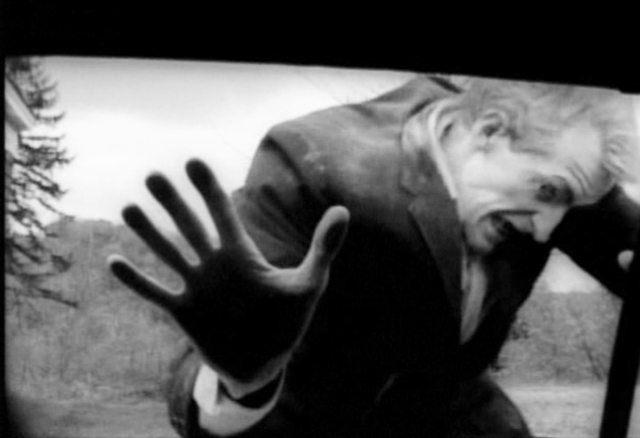 The story is simple. A couple visits a graveyard. A dead man comes after them. They get away and find shelter in a farmhouse with a number of others. The zombies (never actually called “zombies” in the movie, they’re “ghouls” in the script) come after them. From TV reports we learn that whatever’s happening is happening everywhere, and that it may be caused by a probe returning from Venus. Aha! Space disease! No other explanation is given. 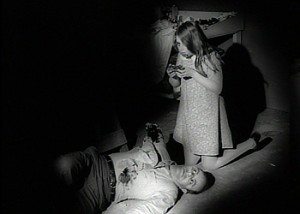 Horror ensues. Including one of the best, most devastating endings in movie history. Night of The Living Dead was something new. It profoundly disturbed and shocked people. It came out just before the MPAA rating system was put into place, so children could see it. No one knew what hit them, because no horror movie had ever been so blunt and gruesome and shocking. The dead rise up and eat people, for fuck’s sake! A little girl dies, comes back to life a zombie and eats her mother! People were outraged. Here’s what Variety had to say about it: 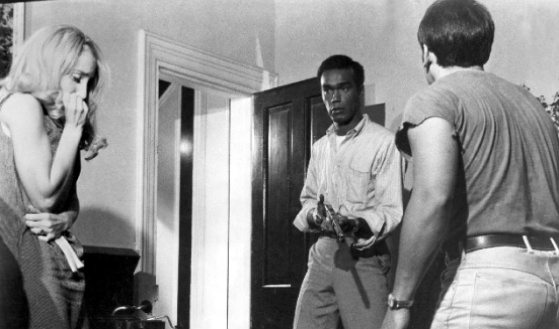