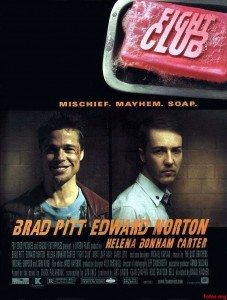 I will say this about Fight Club: it is an interesting movie. Putting it far ahead of most of what gets made. I saw it when it first came out in ’99 and thought it was good for the first half, and kinda dumb and boring for the second, with a completely ridiculous ending. I didn’t give it much thought after that, maybe saw the occasional ten minute chunk of it now and again flipping through cable late at night before turning to Sifl & Olly instead. Always thought people were a little crazy to love it the way they did (once it hit DVD, anyway. It didn’t do very well upon its initial release). I never saw what the hubbub was about. Is it that the movie is just so very “cool”? Maybe, I thought, though what’s so cool about a bunch of dopes who can only feel like men when somebody pounds them? Maybe it’s all the fancy cinematic methods director David Fincher employed to tell the story? Or just Brad Pitt being a bad-ass? Or give its fans some credit: maybe they think it’s a brilliant, hard-hitting (ahem) critique of the consumerist, capitalist society we’re all stuck living in, and want so desperately to escape, by whatever means possible. Maybe the means suggested by the movie seem like the only means possible, as opposed to some kind of sad farce, which is rather what I found them to be. And so, that’s all I ever thought about Fight Club for ten years.

The second time I saw Fight Club was at a screening in ’08. Curious to see what I’d make of it a decade down the road, I went with an open mind, hoping it would turn out to be something far better than I remembered. Remembering what I did of it, this seemed possible. Had I been too hasty in dismissing it back then? The first half played more or less as I’d recalled: it’s fast and funny and overall a nice little ride, with some good social commentary. It really nails the ‘90s, I thought, the rampant consumerism, and the fact that here in the U.S. we didn’t have anything else more dramatic to whine about aside from rampant consumerism. Strange times, the ‘90s, now that we’ve got room to look back. A lot of anger, and nothing to be angry at. 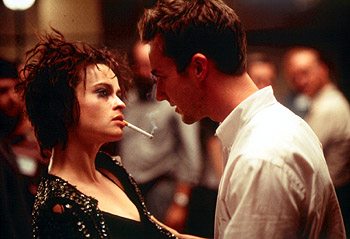 And then the movie comes to what struck me as a hugely pivotal scene, where Ed Norton (as the nameless narrator) and his imaginary alter-ego Tyler Durden (Brad Pitt) drag a liquor store employee out back, put a gun to his head and threaten to kill him. It’s the first serious thing to happen. Before that all their mayhem involves little more than pissing in soup. It’s a fun movie up to this point. This scene isn’t fun. It’s mean. Norton and Pitt go from entertaining to despicable. But they don’t kill the guy. He runs away and Norton, taking the gun from Pitt, checks the chamber: no bullets.

And I thought: bullshit! What the fuck is this? This movie has no balls! It doesn’t even have the courage of its convictions! It plays this brutal, mean scene, then winks and says, “Nah, just kidding.” Everything after that scene played to me as fake. Just a bunch of fake revolutionaries enacting a fake revolution. They continue pissing in soup with their Project Mayhem, and continue having nothing real to direct their anger toward, aside from each other. 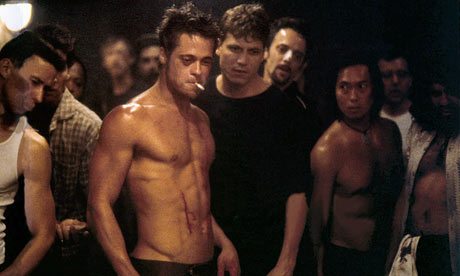 That’s the other thing that struck me on this viewing, that the fights in the fight club were as fake as everything else. They whale away on each other and end up with little bruises and black eyes. It’s Hollywood movie fighting presented as “real.” It all seemed like a joke.

In the end, their plan is to blow up credit card company buildings. That’s their big revolution. And they’re going to do it with no loss of human life. The late-night staff is all a part of Project Mayhem, so no people will be in the buildings when they’re blown up. This too struck me as utterly lacking in balls. An act of property damage to destroy credit. Is this all we had to fight in the ‘90s? 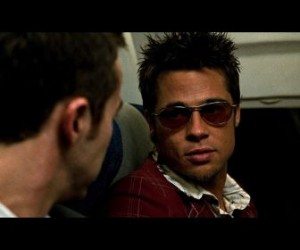 I left that screening all fired up. I thought, this movie both represents the ‘90s in its subject matter, and in that it suffers all the same ball-less mediocrity, misdirected anger, and ineffectual, fake whining that the ‘90s themselves suffered from. And how about that ending? Buildings (though emptied of people) blowing up and collapsing. You sure as hell wouldn’t make that movie today, I thought then in ’08, that’s way too reminiscent of 9-11. But not only that. You wouldn’t make this movie today because much as I hate to sound like some asshole politician, the world did indeed change after 9-11. We got scared. The world got bigger. Bitching about consumerism suddenly didn’t seem very pressing. The problem was no longer that we couldn’t help ourselves buying and caring about a  bunch of crap we didn’t need, the problem was that giant financial institutions bankrupted untold thousands who could no longer afford food or a place to live.

I ranted and raved at a friend on the phone about Fight Club, about how it could only have existed at the time it did, how it represented that time more completely than any other movie, not out of greatness, but out of its own sad ball-lessness. I had a lot to say about it, in amped-up, ranting madman form. 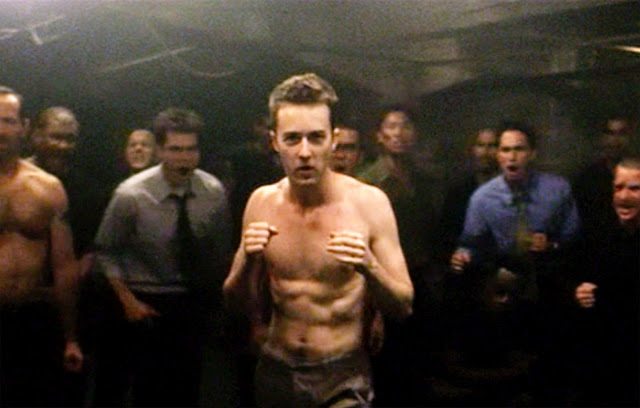 But I didn’t have a movie blog. Like now. I saw it was screening again a couple days ago, and I thought, aha! I should go see Fight Club again, get all worked up and pissed off again, and write a post full of genius insights! I will turn the movie world on its ear, by gum! 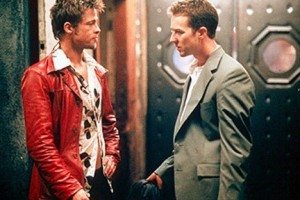 So I saw it, and it didn’t do a damn thing for me. I thought, eh, it’s all right, but what was I so worked up about again? I didn’t feel anything I’d felt in ’08. The gun scene came and went and I thought, sure, okay, that’s not such a big deal. The deeper into the movie I got, the more I realized that everything I’d found so ball-less last time had to be intentional. It seems to be the whole point, even, that Norton’s nameless narrator (the name of my new band, by the way, Norton’s Nameless Narrator) is an ineffectual, hallucinating lunatic with no clue at all what he’s doing or why he’s doing it. He doesn’t threaten human life at all because he’s not fighting against anything but himself. Durden, his alter ego, his dream of who he wants to be, is a horrible person with no redeeming qualities whatsoever, aside from being rather amusing for awhile. By the end he turns into a fascist tyrant ruling over a group of dehumanized, personality-free robots. Watching the buildings fall at the end, Norton seems to be saying, “Whew! Got that out of my system. Sorry about the mess. Hm, now what to do with my life?” 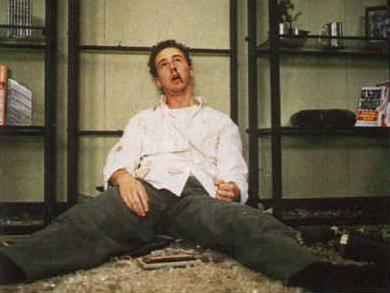 Reading about the movie, I see that Fincher thought of it as an updated version of The Graduate (’67). To him, it’s a coming-of-age film. Well, okay. I guess. The end, then, is Norton having finally grown up, finally having gotten past all that kid revolution stuff? And now he can live a happy life with the marvelously well-adjusted Marla (Helena Bonham Carter)? Isn’t that all a bit pat? Perhaps.

“Perhaps.” Is there any stronger word for an opinioned movie-opiner to use? Not in this case. In this case, I saw a movie, and it wasn’t bad. A lot of good dialogue, voice-over that actually feels integrated into the movie, a great performance by Ed Norton, kind of a lame climax, and ultimately not much to say about anything, other than to represent certain attitudes of the late ‘90s male id.

Crap. I hope I’m not getting old and boring. I think I’ll watch an Oliver Stone movie next so I really have something to rant about…