So, who are you voting for? Obama? Boooooring.

I’m voting for Warren Beatty. Since the 1960s, this tussle-haired thespian has been all up in politics’ business. He’s been active on behalf of all sorts of liberal causes and has lent his name and energy to many an election campaign. He also has made quite a few films about politics.

And since you’ve all registered to vote like good little moppets, and are busy going through your voter information pamphlets right about now, what better time to watch a few Beatty films? 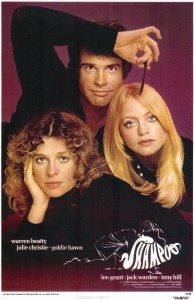 Shampoo is basically one of the best films ever made. If you haven’t seen it yet, seriously—get on that.

Ostensibly, the film tells the story of a hairdresser named George—Warren Beatty—who can’t seem to stop having sex with everyone. He wants to open his own salon and this pushes him to raise money, an arena in which his performance is not nearly as orgasmic. 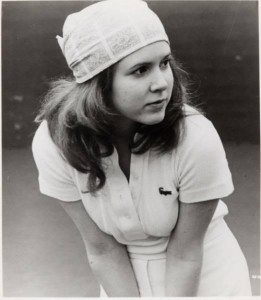 When I watch Shampoo (and I watch it often), I see the story of a man who lets his desires (lusts) lead him astray. It’s not a sex-comedy, though. That’s because we’re George. And by we, I mean ‘Americans.’ Too focused on our dreams and desires and pleasures to see how the world is changing around us. And how if we just stopped, for one moment, and really thought about what we wanted, we could probably get it.

In that sense, it’s all about politics.

Does George love his girlfriend Jill (Goldie Hawn) or his ex-girlfriend Jackie (Julie Christie)? Can he commit to either of them, or to opening his own salon, or will he just go on fucking every woman he can, whether or not he’s even in the mood? As Warren Beatty’s character spirals down deeper into his own minute concerns and petty desires, the world slips out from underneath him. He wakes in a morning named Nixon and then, only then, does he see what his selfishness has wrought—on those around him and upon himself, too. 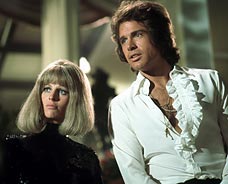 Shampoo is written by Robert Towne, who scripted Chinatown, The Last Detail, and other masterpieces. It’s directed by Hal Ashby, who made Harold & Maude and Being There. The cast is perfect. And what the film means? That’s perfectly suggestive. The message is there for you to tease out or trim. It’s a film that shows you a mirror and asks you how you look.

Perhaps, a haircut is in order? 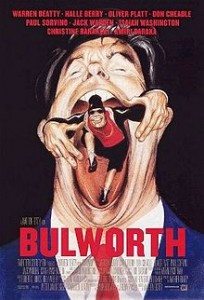 On a scale of subtly, Bulworth does not compete with Shampoo. Watching this one, if you don’t see the political message, you should probably just stop watching films and go back to playing Gears of War or something.

That said, I like Bulworth. It takes an oft-voiced complaint—that politicians are lying sacks of shit—and imagines what would happen if that weren’t the case.

In this film, Beatty plays a senator named Jay Billington Bulworth. Jay has a problem. He’s become everything he despises. While he used to be a liberal firebrand, now he’s a moderate, sold-out, loveless, creep (*cough* insert name of  politician here *cough*). He’s also struggling in his campaign for re-election.

So what does he do? He does what any self-respecting senator would. He sells his vote on an insurance bill in exchange for a $10 million dollar life insurance policy naming his daughter as beneficiary  Then he puts out a contract hit on himself.

Thing is, he finds doing this liberating. And, no longer seeing any point to pretending (or staying off the sauce), he shows up to campaign events and says exactly what he thinks. Even when it’s offensive.

Which, to his surprise, the population responds to. So now… he’s not everything he hates, just he has an assassin coming for him and the insurance industry to deal with and… he turns into a rapper with honesty-Tourette’s. 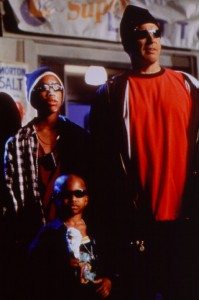 He raps. Warren Beatty as Jay Billington Bulworth. Rapping. Yo yo. Is it completely weird? Certainly. Does it work? Insanely, sort of. Bulworth is crazy, or in serious rebellion. The truth must come out. In raps.

Yeah. As you might imagine, certain people weren’t so happy with this film and its political stance. Namely Fox Studios, which had been more or less tricked into releasing it with only the vaguest idea of what it was about. They gave it no publicity and only a limited run.

But the truth has to be free. And if you can watch Bulworth and then watch a speech by any politician, and not see exactly how much shit is being shoveled down upon your head… wake up, schmuck.