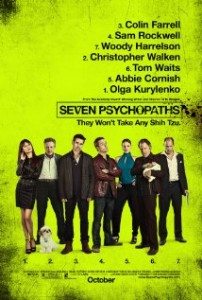 There was a time, not so long ago, that I was looking forward to Seven Psychopaths.

So what happened? Why have I gone sour on Seven Psychopaths? It’s got a great cast: Colin Farrell (who was excellently fucked up in Bruges), Sam Rockwell (hit or miss, honestly, but Moon!), Michael Pitt, Christopher Walken, Woody Harrelson, Tom Waits, Abbie Cornish, Olga Kurylenko…

The trailer even seemed good when I first saw it.

But then I saw it again. And again. And again. And everywhere I look: it’s the trailer for Seven Psychopaths! And sometime between viewings seven and eight, I became one of the psychopaths. The quirky-cute jokes, the schtick, it all just curdled. As will any joke after repetition.

Frequently, I find, advertising doesn’t help. It hurts; and not in the “it discourages me from buying the advertised product” way, but in the “this has begun to cause me pain” way. Trailers, after all, are advertisements—as well as occasionally short films in their own right. 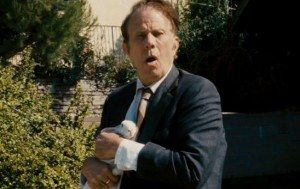 This trailer, for Seven Psychopaths, is a comedy. Dark, but comic. And now that I’ve heard the joke, all that’s left to do is wonder why Tom Waits has a rabbit—but really? I don’t care. I might have cared once. Or at least been curious. Now, not so much.

You can watch the trailer for Seven Psychopaths if you so desire. If by some miracle you have not seen it seventeen billion times already. I won’t break it down for you, as that would require watching it again. And oh hells no.

So I’m not critiquing the trailer per se; it’s fine, if a bit heavy on the Soderbergh for something that’s NOT Soderbergh. It’s not even that it reveals too much (although it does). It’s more that it has revealed the same things so many times, and across such a wide swath of the film’s structure, that I won’t be able to watch the movie without going, “Oh yeah. I saw that bit in the trailer. Now, I wonder where the next bit I saw in the trailer is going to come? I bet….. now!”

So… will I see Seven Psychopaths? Is it fair of me to prejudge a film based on its extensive ad buy? I don’t know. I do know that the desire I had to see what McDonagh has done is gone. Completely. I feel like I’ve seen the film already. And who wants that?

In contrast, I’ll share with you the best trailer I’ve seen in years, or maybe ever. When I went to the last Midnites for Maniacs screening, Jesse Hawthorn Ficks shared this with the audience. It is, or was, the trailer for The Exorcist. Until the studio pulled it because it was scaring the holy bejeebus out of theater-goers.

So what’s a guy to do? I guess I’ll go see Argo this weekend instead.

2 responses on “Seven and a Half Psychopaths”