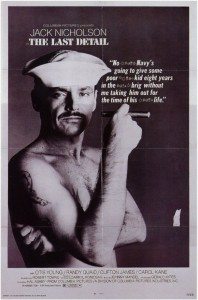 The Last Detail (’73), director Hal Ashby’s follow-up to Harold & Maude, is a mysteriously compelling little movie. There’s not a dull moment in it, yet nothing happens. Ashby and screenwriter Robert Towne (of Chinatown and Ashby’s Shampoo fame) tell the kind of story you expect will end with an eruption of violence or a daring escape or at the very least a lesson learned, but in which nothing of the sort happens. Instead we follow three characters until we stop. Nothing happens and no one learns a damn thing. All the real action of The Last Detail simmers below the surface, never to emerge.

The story is simple. Two sailors, Buddusky (Jack Nicholson) and Mule (Otis Young) are assigned to bring a young prisoner, Meadows (Randy Quaid), from their base in Virginia to a military prison in Portsmouth, New Hampshire, where he’s to serve eight years for having tried (and failed) to steal $40 from the polio fund, a pet project of a C.O.’s wife. 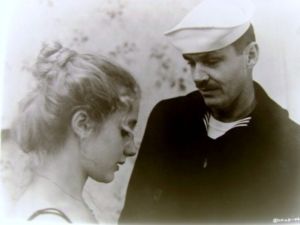 Which is bullshit. Eight years? For $40 he didn’t even get? It’s not long before Buddusky and more reluctantly Mule warm up to the poor kid and decide to show him a good time. So they get drunk. Start a fight with some marines. Get the kid laid at a Boston whorehouse (a very young Carol Kane plays the whore). Hang out with some hippies. And talk a lot of shit.

The undercurrents here are all about prison, and not the one Meadows is headed for. The prison is the military life Buddusky and Mule are committed to, the rules they have to follow, their total lack of freedom. Both of them need it in their own way. Mule because it’s literally all he’s got in life. Buddusky because if not for the military his issues with authority would surely land him in jail, or worse. From there it’s a short journey to reading their metaphorical prison as a metaphor for society at large, the rules we’re all pinned down by, our inability to escape. As ever with the scripts Ashby is drawn toward directing, The Last Detail is about characters pushing to break the bonds life has placed around them. 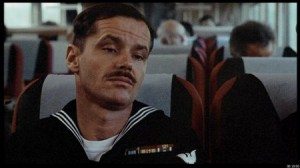 Buddusky seems ever on the edge of grasping something larger about his situation, but he never does. Neither does Mule. They find themselves at a small hippie gathering where Buddusky tries to impress a girl with his bullshit talk about the manliness of plying the opens seas, and Mule is asked to name just one damn thing he doesn’t like about Nixon, why there are no black officers, and what he felt about being sent to Vietnam. About the last he says, “You do what the man tells you.” The hippie chick just gapes at him. Mule sees exactly how he’s being perceived in this scene (whereas Buddusky is oblivious), but he has no other answers to give, and no solutions. It’s interesting to see a movie made in ’73 that makes the hippies look like jerks and the blue collar Navy guys sympathetic. 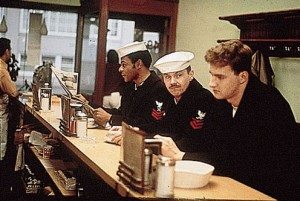 Everywhere they go is freezing cold, often snowing. They shiver throughout the movie. At the end, having done everything else, they decide to have a picnic. Snow on the ground, they break sticks, start a fire on a grill, cook hot dogs. It’s the most miserable picnic ever. 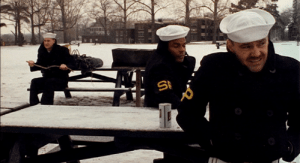 You’d think that if nothing else, a bond would build between the three. It almost does, but no, not really. Meadows makes a half-assed attempt to run at the end. Buddusky chases him down and pistol whips him. When they bring him to the prison, there’s not a word spoken as Meadows is whisked away. The moment couldn’t be more unsentimental.

Mule and Buddusky walk off, bitching about the army punk who gave them a hard time, and hoping their orders came through. They’re not leaving the life. It doesn’t even occur to them. 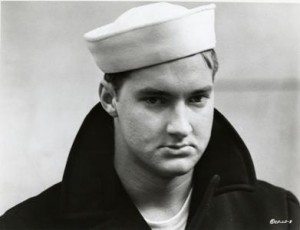 Which maybe that doesn’t make The Last Detail sound good. But it is! It’s totally entertaining from start to finish. Nicholson gives one of his best performances, intense and angry at times, reflective and quiet at others. Quaid is hulking and meek, just a poor kid unable to percieve what’s happening to him. Otis Young goes through the movie with a distant, shaken look. He senses what’s wrong with his world, but knows he doesn’t have the power to change it.

Ashby paces the movie with his usual laid-back style. He uses lap dissolves in place of hard cuts to create a subtly dream-like vibe. In one scene, on a moving train, Mule chews out Buddusky for screwing around, with the angle on Mule. Halfway through his speech, the scene dissolves to a shot of the passing snowy landscape, we hear the speech continuing, and just as fast we dissolve to the angle on Buddusky being yelled at. It’s an odd thing to do. Does it connote the passing of time? Not literally. Instead it creates a mood of time going by without actual movie time moving ahead. Similar instances crop up throughout.

Ashby, with editing on the brain?

No doubt it was this thoughtful editing that caused Columbia so much panic at the time. Ashby and his editor, Robert C. Jones, spent a long, long time putting this movie together. Columbia threatened to come take the film away and cut it themselves, but Ashby convinced them to wait. Screenwriter Towne didn’t like how it was edited, thinking the pacing messed up his script. Of course Towne also hated it when Polanski changed the ending of Chinatown. So let’s just say that his taste was questionable beyond the writing phase.

Eventually Ashby had a finished film and convinced Columbia to enter it at Cannes, where Nicholson won Best Actor. Columbia had been holding up the release due to what was then an unprecedented use of the word “fuck,” along with all of the other profanities. (How times have changed: The Last Detail doesn’t even make the top 125 on the list of movies with the most fucks (and aren’t you glad there’s a list?)) 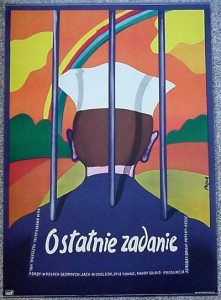 3 responses on ““I Am The Motherfucking Shore Patrol!” Hal Ashby And The Last Detail”