Now let’s not be offended by my search-engine-humping title there. Helen Mirren, as I trust you’re all aware, is and always has been a fantastic actress. She’s also always been a babe. If anything, she’s actually managed to become more beautiful as she’s aged, a rare feat in the world of movies, where young beauties are usually chewed up and spat out by the time they’re 30. I choose to believe this is due to Mirren not being, as are so many actresses, completely nuts. She exudes inner peace, good humor and intelligence.

How good an actress is she? She joined the Royal Shakespeare Company when she was 20. She’s continued to work in theater ever since, along with essaying something close to eleventy million film and television roles.

For this week’s double feature we begin by going way back to Mirren’s fourth movie, shot when she was 22. 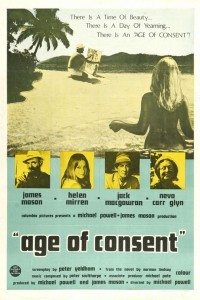 I’m not going to sit here and tell you that Age of Consent is a great movie. Because it is not a great movie. It was directed by Michael Powell, who directed everything from A Matter of Life And Death to The Red Shoes to Peeping Tom, spanning 50 years from ’28 to ’78. Even Powell thought this one didn’t quite come out the way he’d envisioned.

Powell had originally wanted to make an adaptation of The Tempest starring James Mason, but since he couldn’t get that going, he made Age of Consent with him instead.

It’s about an artist (Mason), worn out by success and life in the big city, who moves to an island on the Great Barrier Reef of Autralia. Yes, the rough life of the too-successful painter, something we can all relate to. It’s there he meets Helen Mirren’s Cora, something of a nature child. She lives with her loony, alcoholic mother, and spends her days lazing about naked, swimming in the ocean and catching fish, which she sells to him. 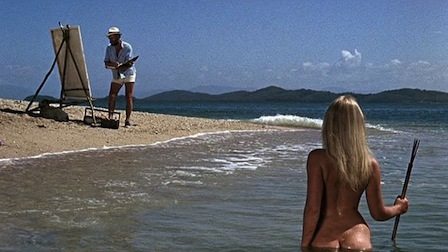 She becomes his model and his artistic muse, posing for him in the nude. Her mother finds out. Trouble ensues. 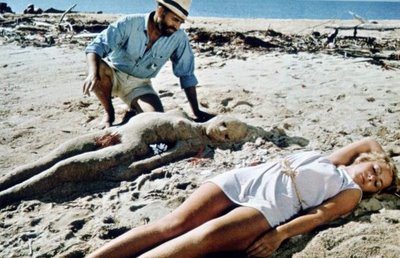 Meanwhile, James Mason, being blind or insane or something, only thinks of Cora as his model, failing, one presumes, to notice that she’s Helen Mirren, she’s naked, and she’s in love with him. Finally he realizes what’s in front of him. Do they actually screw in this movie? I don’t think so. Our first feature represents the foreplay. 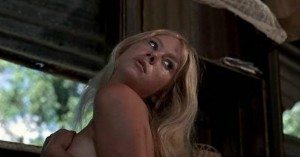 So yes, as I was saying, it’s not great, but it is compelling in a sort of historical way. It’s an odd little movie. And there’s plenty of young Helen Mirren flouncing about naked, which she does with a certain confident, who-gives-a-fuck way that’s highly appealing.

Unfortunately, after youth comes age, and with age comes all sorts of twisted, demented depravities. You know what I’m talking about, you weirdos. Which is why our second feature is: 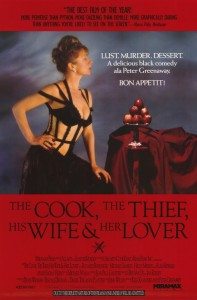 Peter Greenaway makes extremely arty, esoteric and, according to some, unbearably pretentious movies. I always find them interesting. If nothing else, they’re beautiful and unique. I’m never sure where one of Greenaway’s movies is going. The Cook Etc. is his best.

The Thief (Michael Gambon) is a fat, loud, wretched son of a bitch, introduced having his henchmen beat up and smear dog shit on some guy who didn’t pay off on time. He spends most of his time, or at least most of his movie time, in a restaurant he’s lately bought. He eats there with his henchmen and hangers-on and his Wife (Helen Mirren). She suffers him, but barely. He’s horrible.

She spots a man (her Lover, Alan Howard) eating alone at another table. Without a word to each other, they end up screwing in the kitchen, and in the bathroom, where they’re almost caught by the Thief.

The affair continues throughout the week. Every day is introduced by that evening’s artfully rendered menu. Eventually the Thief discovers what’s going on. And some horrible things happen, not least of which to the freaky, singing albino kid in the kitchen. 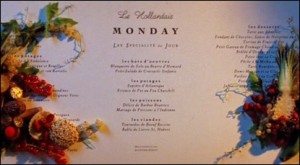 Watching it recently after a gap of many years, I found myself dreading the horrific scenes to come. There aren’t many, but they’re striking. I thought maybe I didn’t really need to be watching this movie again. Yet there comes a scene near the end, the Wife’s long conversation with the Cook (Richard Borhinger), where the movie falls together in this rather magical way. It carries you through the to the end, and I left the theater elated at having seen such a great movie.

Visually, the movie couldn’t be more striking. It takes place almost entirely in the restaurant’s kitchen, dining room, and bathroom. Each room is decorated with different colors. The camera is set up on a track such that it may glide along beside characters as they walk from room to room. As they do so, their costumes change to match the changing decor. Remarkably, without my having mentioned this, you likely wouldn’t have noticed this on your first viewing. I don’t know how Greenaway figured on that. And he must have. Otherwise the trick would have been far too distracting. The ever-changing, colorful costumes are designed by Jean-Paul Gaultier.

The music is haunting and beautiful, a score by Michael Nyman. I would have included it in my top ten scores for obsessive listening post, but those were all original scores, and one selection here, “Memorial,” is a piece Nyman wrote earlier. I’m a stickler, people. 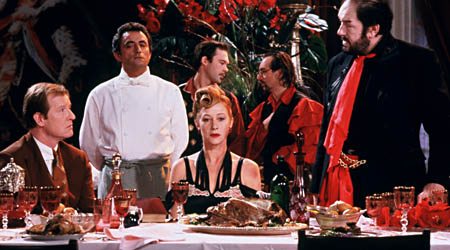 Meanwhile, Helen Mirren. She is wonderful in the movie, as a woman who must have had the worst self-esteem in the world to have married this horrible Thief, but who finds it in herself first to have an affair right under his nose, and then to do something considerably more drastic.

And as promised, she is naked, she is beautiful, and she screws quite a bit. Enjoy!