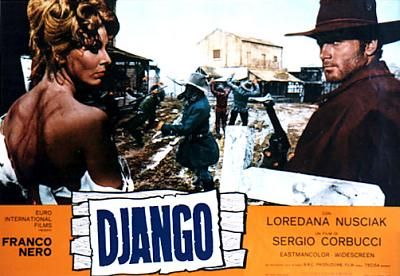 Though I note that in ’80 Corbucci directed the American comedy Super Fuzz (’80) starring Ernest Borgnine, about a cop who gains radioactive superpowers from an explosion, which is totally absurd. Everyone knows you have to be bitten by a radioactive spider to get superpowers. I admit I absolutely loved Super Fuzz when I was 9. But then I also loved the Chevy Chase radioactive-sludge-gives-man-superpowers comedy Modern Problems (’81). Haven’t seen either movie since. I fear they may not have aged well.

Django is Corbucci’s most beloved movie. It spawned over 30 sort-of sequels, not that Corbucci or Nero were involved in them. It was just the name and character, used and abused by anyone and everyone. Though again, outside of Italy, no one really paid any attention. Corbucci wrote and Nero starred in one official sequel, Django Strikes Again, in ’87. Word is they’re looking to make part 3. 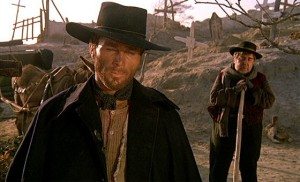 The original Django is a must-see. It’s the best spaghetti western not directed by Sergio Leone. If you’ve only ever seen A Fistful of Dollars, For A Few Dollars More, and The Good, The Bad, And The Ugly, then Django needs to be the next movie on your list. Mind you, it doesn’t quite rise to the artistic heights of the Leone films. After all, there’s no Ennio Morricone music, and Corbucci isn’t the master that Leone is, but no matter; Django is a great ride. A dirty, violent ride.

I won’t spoil the story. Not that it’s especially complicated. It’s about revenge, and many people die. I will point out that it opens with our hero trudging through the mud, dragging behind him a coffin. Who or what is in it? You will be very happy when you find out. It ends with a brilliant shoot-out in a cemetery.

When it came out, it was considered to be one of the most violent movies ever made. And it is. But in today’s world, not so much that you’d notice. A lot of people die, but they do it on a ‘60s Italian western budget, i.e. there’s lots of bright red paint splashed around. The hand-mangling scene, though, that’s impressively brutal. 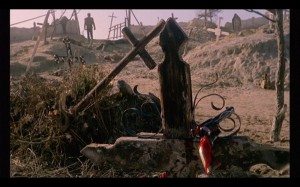 Tarantino’s Django Unchained isn’t a remake of Django. It’s just another one of the many movies to use the character’s name. Still, it’s sort of a western. Or more exactly, a southern, focusing as it does on slavery. And surely it will contain many film-nerd nods to Django, because that’s what Tarantino’s all about, movies referencing other movies. So you’d better watch the original soon, that you may impress your friends with your inside knowledge.

For those of you in the Bay Area, Django is the late show at the Castro on Jan. 18.

3 responses on “Django, The Spaghetti Western”