It’s the holiday season, and if you’re like me, when December rolls around, you simply can’t stuff enough Jesus inside of you. He’s everywhere you look. His smiling face is burnt into your toast, his bleeding head is outlined in the cranberry sauce atop your turkey, and dressed up as his alter-ego Santa Claus, his re-animated corpse hands out presents to all the children of the world. Well, aside from the many hundreds of millions of heathen children. But they’re going to grow up as bad people anyway, then die and be forever tormented in the fires of hell, so let’s not worry about them.

What better way to re-live your recent celebration (or, if you are a heathen, your recent negation) of that mightiest of all warriors, Jesus Howard (well, you tell me) Christ, than to watch a double bill all about him?

We begin with something on the weird side: 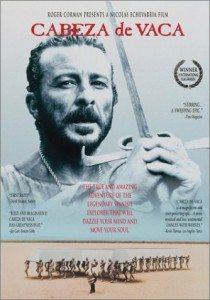 A trippy, surreal, almost dialogue-free account of the adventures of Álvar Núñez Cabeza de Vaca, a Spanish explorer who in 1528 was shipwrecked on what is now the Florida coast. Of the 600 men in the party of colonizers, only three survived. Cabeza de Vaca spent eight years walking through the southwest until finally meeting up with other Spanish colonial forces. Then he wrote a book about his adventures, the first European book about North America, the place and its peoples.

Of course it’s unknown how much of his book is fact, and how much he embellished. But no matter. It’s a great read, and has remained in print since its initial publication in 1542.

The movie is an excellent adaptation. It compresses time, it compresses incidents, it streamlines and visualizes, it presents an impression of Cabeza de Vaca’s adventures, and imbues it with great metaphorical significance, primarily by focusing on how in those eight years he became a shaman. He heals the sick. He witnesses a burning bush. He brings a dead man back to life. But he’s not Jesus, mind you. Heck no! 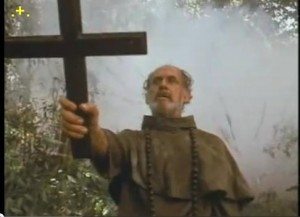 good luck with that

Cabeza de Vaca‘s final image brings home the theme: that of the Spanish crushing the new world’s peoples under the iron boot of their imported religion. What Cabeza de Vaca’s Jesus-like experiences as a shaman show is that the peoples of the new world have their own religion well in hand. They don’t need one shoved down their throats at sword-point. Everything Jesus supposedly did is done just as well in the new world. This is what Cabeza de Vaca learns through his own experiences. He learns about the people, about how they think, about what they believe, and he sees how the last thing they need is another culture imposing its will upon them. 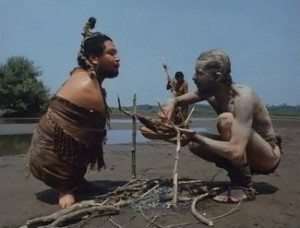 It’s in Spanish, directed by Nicolás Echevarría and starring Juan Diego. But don’t worry about all of those subtitles tiring out your eyeballs; there’s little dialogue. 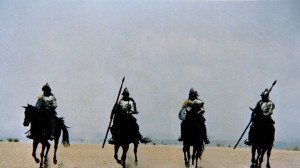 And now that Spanish conquistadors have trampled the Americas, it’s time to lighten the mood with our second feature, also not at all about Jesus: 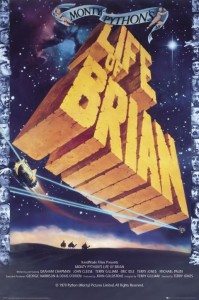 For some time after The Holy Grail, Eric Idle, when asked about the next Python feature, said it was to be called Jesus Christ—Lust For Glory. That’s some naming genius right there. However, once the Pythons started coming up with hilarious bits about Jesus, they realized that, at least based on what he’s actually reported to have said and done in The New Testament, Jesus isn’t funny. He talked a lot of sense. The problem, then, is that since those days, it’s his followers who’ve caused all the trouble. So they decided to make a movie lampooning religious followers.

Brian, poor kid, was born a couple of mangers over from Christ on the same night. He didn’t want anyone following him. He didn’t want to start a religion. And he certainly didn’t want to be crucified, the lucky bastard. So like I said, this isn’t a  movie about Jesus. It’s about a very naughty boy, and the very irritating people who take to following him and reading the signs of his sandals and whatnot. 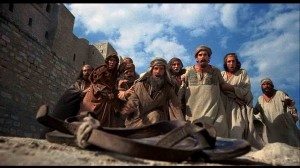 The shoe is a sign that we must gather shoes in abundance!

Okay, I know, you don’t need me telling you why you need to watch Life of Brian. If you’re anything like me, you spent your entire childhood with the damn thing on a loop. You can recite every line of the movie, and have, to your friends, over and over again, daily, for years on end. But that’s what double features are all about: giving you a reason to re-watch an old favorite. 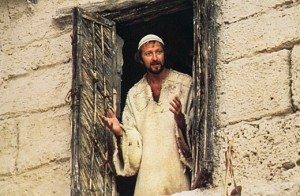 Cabeza de Vaca was too small and too foreign for anyone to bother protesting it. Life of Brian, on the other hand, was hated, banned, proclaimed evil, blasphemous, and heretical, and was a huge success. It was a ballsy movie to make, given the insanity of the religious, which is of course delightfully ironic, since it’s exactly the lunatic behavior of those who claim to follow the teachings of Christ that the movie sends up. It might not have found backers but for George Harrison of the Beatles, who put up millions for the simple reason, as he said, that it’s a movie he wanted to see. 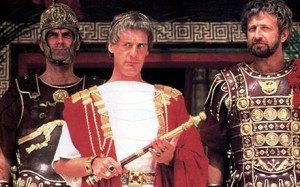 Go here for the first part of a rather famous interview and debate between Michael Palin and John Cleese on the one side, and some very religious fellows on the other. Guess who comes off as petty, dim, and spiteful? It ain’t the Pythons.

Oh, religion! You bring a smile to our lips! Or else you’re busy crusading about, lopping off the heads of and burning at the stake all who would dare to speak against your charms. Such is the joyful message we here at Stand By For Mind Control wish to bring into your homes for this holiday season. You are encouraged to thank us in the comments. No gifts required. Unless you’ve got a nice bottle of rye you don’t have a home for.