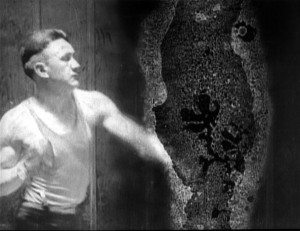 Decasia (’02) is a trip. Far be it from me to promote or even suggest the smoking of a certain plant, but if that’s the sort of thing you enjoy, you should enjoy it while watching this movie, the found-footage creation of director Bill Morrison. If plant inhalation isn’t your bag, don’t worry, Decasia will flip your biscuits stone cold sober. It’s short at 63 minutes. There is no story. There is no dialogue. It consists of old film clips of decaying films. That’s it. It’s accompanied by an eerie original score by Michael Gordon, written for four detuned pianos and an orchestra, that itself sounds like decay and dissolution. 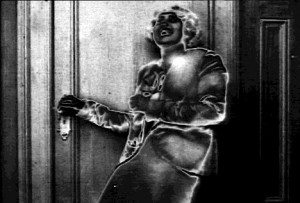 Blotches, streaks, pulsing blobs, stretching faces–this is what you see. Sometimes the images underneath are relatively clear, sometimes you can’t see a thing for the swirling, bubbling decay. There’s a boxer punching away not at an opponent but at a scribbly-line-monster straight out of Star Trek, theme-park rocket-ship cars flying out of interstellar warbling dustballs, a happy flapper flickering back and forth from her negative image, a distant line of camels eaten by a crumbling sky. It’s weird stuff.

After ten minutes I thought: can I really sit through this whole thing? Turns out yes, I can. It doesn’t really go anywhere or do anything but what it does, but what it does you can’t tear your eyes from. If you take a look at Morrison’s website, you’ll be presented with a decaying clip like what’s in the movie (though the clip itself isn’t in it). If you like the visually weird and abstract, this is one to check out. 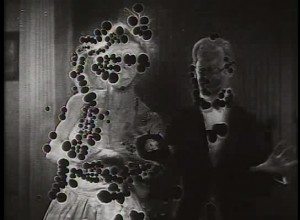 One response on “Decasia: An Abstract Trip”