You’re watching a movie and a character in it strikes a particular pose. Or maybe the way the camera frames the scene, or a few elements of the production design, or a particular musical cue instantly remind you of another film.

This sort of thing, done intentionally, is called an homage (from the French, pronounced o’mahzh). If that’s news to you, this is just the article you ought to read.

Homages and other in-film nods and winks are like hyperlinks. You notice an underlined reference in the film you’re watching and you instantly access to another level of information. But, as it turns out, a nod is not as good as a wink to a blind bat, if you know what I mean. Some homages are far superior to others.

But, since people are implanting, noticing, and discussing these sorts of in-film references more frequently—in films as diverse as Wreck it Ralph and Django Unchained—I thought a brief discussion of homages was in order.

Just a quick little one-bite lesson. Do not worry. There will not be a quiz.

Starting out on the weak end of the scale, a reference—not even an homage, really—can be nothing more than a hat-tip. A character flat-out mentions another artist or artwork for example. 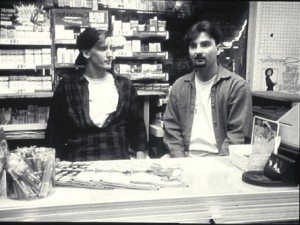 This happens in Clerks where the characters have a nice long discussion about The Empires Strikes Back and Return of the Jedi. Does it add anything to the film? Well, it establishes that the characters are the sort of people who discuss Star Wars, so in a sense it’s a bit of shorthand, like if one of the characters was carrying a copy of The Catcher in the Rye, which would suggest “this youth is as disaffected as Holden Caulfield.”

But that’s about it.

There’s a moment when it seems like director/writer Kevin Smith might attempt to draw some deeper connection between the characters in Clerks and the poor innocent tradesmen they’re discussing who get killed constructing the second death star, but… no. These characters are just talking, like you’d talk to your friends presumably, about whatever bullshit happened to pop into your head. In the case of Clerks, the reference is endearing—by which I mean it’s supposed to make you feel connected to the characters, not that I find it cute.

I never understood what people saw in Clerks.

Stepping it up a notch, you’ve got something like the train station scene in Brian DePalma’s Untouchables.

Now, you may not have noticed, not being up on your early Russian cinema, but DePalma is deliberately paying homage to Sergei Eisenstein’s The Battleship Potemkin—specifically that film’s most famous sequence, which takes place on the Odessa steps. Watch just a couple of minutes of it on YouTube.

Even if you’ve seen it, it’s worth a refresher.

Eisenstein was pushing the boundaries of cinema with this film. I’ll avoid the lengthy tangent, but the visceral nature of his Odessa steps sequence, the emotive power of the baby carriage bouncing down into danger, his innovative camera placement: all these things make this sequence a staple of film classes for very good reasons.

So when we watch DePalma’s film, and we recognize the baby carriage bouncing down steps into the line of fire as an homage to Eisenstein, we ask, “What’s going on here?” Is DePalma giving us a nudge and a wink by transposing a scene from a much earlier film into this one?

Let’s look at it. The Battleship Potemkin is a film about standing up to tyranny. In the movie, a citizen protest on the steps is quashed by Czarist troops, who fire indiscriminately into the crowd. They kill a mother. Her falling body pushes her baby’s carriage down the steps and it bounces uncontrollably into chaotic danger. It is a moment about innocent victims, the cruelty of the Imperial regime, and the unstoppable nature of violence.

In The Untouchables, Treasury agents are stopping Al Capone’s bookkeeper from escaping arrest. An innocent woman walks into the scene and, when the shooting begins, Costner’s Elliot Ness nudges her baby’s carriage down the steps. He fires first, kicking off the violence.

The woman doesn’t die, but for inexplicable reasons loses control of her legs and expects some guy she doesn’t know and who is currently in the middle of a gun battle to save her baby. Ness goes down the steps after the infant, taking and returning fire, actually endangering the poor kid by moving closer to him.

Plus, the kid isn’t even really in any danger. The carriage would likely just bounce down the steps and continue until it stopped against a wall or something.

But no. Ness not only chases the damn thing down the entire flight of steps, but—when Andy Garcia’s character stops its forward motion with his leg—he takes a nice long moment to stare at the ugly baby inside instead of paying attention to his armed assailants, the mortally wounded bystanders, or the bookkeeper—who is the point of the scene in the first place.

Now. You tell me. What does one sequence have to do with the other? What could DePalma be telling us by referencing the Odessa steps sequence in his film?

I suggest you spend a lot of time thinking about it. Why? Because that will prove that meaning can be found anywhere if you look hard enough. Most likely, what DePalma was saying is, “Oooh. Steps! I’ve seen a movie with steps in them!”

I suppose there might be something hazy there about the tyranny of organized crime? If there is any analogy to be made, it’s pretty weak and its elements do not map out clearly or well.

As a contrast, check out this sequence from Terry Gilliam’s Brazil. It’s much subtler, but he’s also definitely tipping his hat to Eisenstein.

Do you see the replication of Eisenstein’s images here? The woman shot through the glasses? The line of descending soldiers shooting? The tumbling vacuum cleaner? If you’ve seen The Battleship Potemikin, like any good student of cinema, any one of those shots would tip you off to the homage.

So what’s different between Gilliam’s hat tip and DePalma’s? Gilliam’s analogy is meaningful.

Brazil, in case you haven’t seen it, is a film about struggling against an Orwellian world. In this scene, the protagonist Sam Lowry and the revolutionary duct repairman Harry Tuttle escape from the Information Retrieval building. The impersonal forces of the state try to squelch their bid for freedom—a direct reflection of what’s happening in the Odessa steps sequence to which this is an homage.

In Brazil, the homage adds a depth of meaning to the scene, a connection between the fiction of the film and the reality of our world. It’s not required that you recognize the cinematic reference for the scene to work, but if you do, you can easily draw a connection.

Lowry is like the citizens of Odessa. The state he struggles against is no different from that ruled by the Czar. Violence has inertia.

The third kind of film reference I want to illustrate comes from Robert Altman’s masterpiece M*A*S*H. This is the sort of reference that everyone should be reasonably expected to recognize and which—if you miss it—you’re actually failing to understand the scene.

I am speaking about the farewell dinner for Painless the dentist.

In M*A*S*H, Walt “Painless” Waldowski thinks he’s a homosexual because he’s suffering from impotence and he’s an idiot. He sees this development as a reason to end his life (note to impressionable teenagers: do not end your life for any reason, particularly one as pleasantly normal as being or feeling homosexual. Just move to San Francisco). His friends—army doctors who regularly fail to delay death’s relentless approach—know he’s being overly dramatic. In the world they inhabit, everything is so deadly serious they can only survive by taking nothing seriously.

In the film, Hawkeye, Duke, and Trapper John tell Painless they’ll help him by giving him a suicide pill, which is of course fake. Then they throw him a goodbye meal as part of a scheme to restore his confidence in his manhood.

As Taps plays, director Robert Altman slowly zooms in on the dinner table until it fills the frame, holding for a prolonged few seconds: 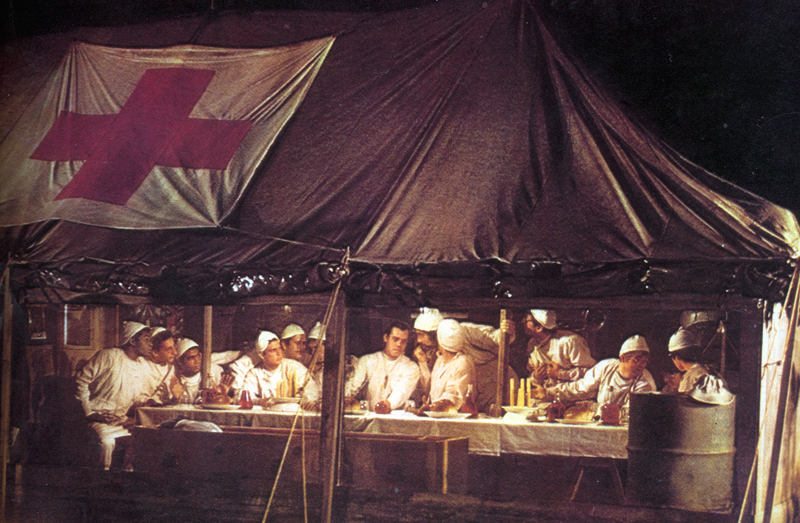 Recognize that tableau? You should. It’s one of the most famous in history. Leonardo da Vinci’s Last Supper:

As the snapshot image returns to motion, Trapper John raises his glass in toast and says, “I’ve got an idea that it’s not such a final farewell after all. Walt’s going on into the unknown to do a little re-con work for us all.” Hawkeye adds, “I just want to say that nobody ordered Walt to go on this mission. He volunteered for certain death. That’s what we award our highest medals for. That’s what being a soldier is all about.”

They are mocking his pointless and unnecessary sacrifice.

Altman, with this one shot, sets off a bomb. He tells you—as clearly as if he said it with subtitles… well, you know. Or you should.

That’s what a citation within a film can do. It can reframe an entire situation, challenge your assumptions, and most importantly, make you think. Thinking is wonderful stuff! Hooray for thoughts!

If you want another killer example of how a film has brilliantly used homage to respectfully connect a new piece of work to its sires, just wait. This week’s double feature post will focus on two of my favorite films, one of which is an homage to the other.