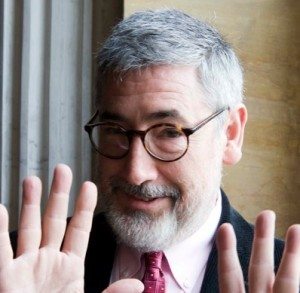 Nothing up my sleeves but comedy

Do you know who is really funny?

I was lucky enough to watch Animal House—Landis’ first studio film—last night with the man himself in attendance. (Thank you SF Sketchfest) While I’ve seen Animal House so often I can practically recite the film line for line, this is the first time I’ve sat at Landis’ feet and heard him speak.

The man know how to spin a yarn. This much should be apparent from his oeuvre, which includes The Blues Brothers, An American Werewolf in London, Trading Places, and ¡Three Amigos! All of which any serious film fan should have under his or her belt.

Someone attempted to interview him, but each question led into an Infinite Jest of asides, anecdotes, non-sequiturs, and jokes. (Q: What’s the difference between a brown-noser and a shithead? A: Depth perception.) It was pretty awesome. 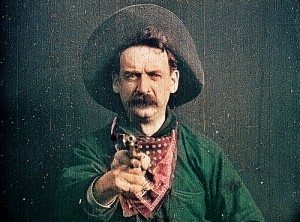 Edwin Porter made The Great Train Robbery in 1903. Among other things, it was the first real Western.

Landis spoke of his start in the Fox mailroom, his near-death experiences working 2nd unit on Catch-22 in the belly of a trembling B-52, and of being lucky enough to learn from the men who saw the birth of cinema. One of his mentors passed along knowledge he’d picked up from his mentor, Eddie. Eddie who you ask? Eddie Goddamned Porter, the guy who invented cross-cutting, the dissolve, and many of the elements which today comprise the language of film.

Landis also shared—as time ran down—a few new tidbits about Animal House. That, for example, the original script was the funniest thing he’d read but it was terribly misogynistic and racist. Watching the finished film, one must credit the man for making what is the prototype for all teen sex comedies—and a film which is not short on shots of attractive women naked—in a way that doesn’t make the viewer feel like a sleaze-ball. Sex is part of college life in Animal House and so are women. 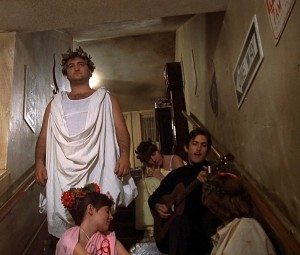 I gave my love a guitar that had no collision insurance

Take the scene in which John Belushi as Bluto climbs a ladder to peep on pillow-fighting sorority girls. How does that end up reading as funny/don’t-try-this-at-home as opposed to skeezy/leering, like much of the teen comedy that followed? Two key elements: 1) Belushi makes such a ghastly racket jumping around on his ladder that the most preposterous thing about the scene is no one notices him; and 2) Bluto’s turn to camera combination eyebrow waggle, which implicitly involves the audience in his voyeurism. And, of course, even Bluto will only go so far. That scene literally falls away before it turns pornographic.

Speaking of Bluto and the brilliant/sorely missed John Belushi*, John Landis said that originally Belushi was irked at him because he had gone through the script and cut most of Bluto’s lines. Why? Landis knew they weren’t necessary.

As you watch Animal House you get everything you need to know about Bluto from Belushi’s unparalleled physical comedy—those little stutter steps he does when ‘sneaking’ into the administration building; how he lovingly compresses beer cans against his forehead; the way his tongue interjects every time he says the word “shit-th;” his preternaturally expressive eyebrows. 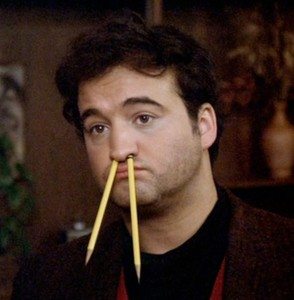 Zero Point Zero is much better than Zero Dark Thirty

Landis also revealed the simple direction he offered his star when describing Bluto to him. He said that Bluto was a blend of two characters: Harpo Marx and Cookie Monster. Sweet but with an impish appetite. Always hungry for more, ready to devour, but not maliciously. That’s also a way to describe the entire film. It’s game, hungry even, but somehow the whole thing comes off as surprisingly sweet.

And with that rambling lead in, I’d like to address what I was thinking about during my flibbitybillionth viewing of Animal House. That is: who are the good guys, who are the bad guys, and who is Otter? 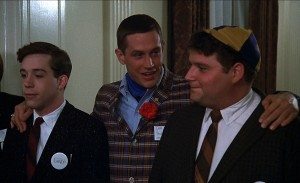 I’d like you to meet Mohammed, Jugdish, Sidney and Clayton…

One of the things that John Landis said is that the first draft of the script needed heroes and villains. Based on the way characters are presented in the finished picture, it’s clear we’re supposed to empathize with the cut-ups in Delta Tau Chi: Bluto, D-Day, Otter, Boone, Hoover, Stork, Flounder, and particularly Pinto (Belushi, Bruce McGill, Tim Matheson, Peter Riegert, James Widdoes, Douglas Kenney, Stephen Furst, and Tom Hulce respectively). Across the aisle, the elitist assholes of Omega Theta Pi are Greg Marmalard, Neidermeyer, Chip and their girlfriends Mandy and Babs (James Daughton, Mark Metcalf, Kevin Bacon in his screen debut, Mary Louise Weller, and Martha Smith). 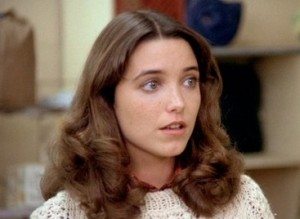 But there isn’t so much of a plot to Animal House and even the characters, when you single them out, don’t have much meat on them. What do we know about any of these college students? Why does Katy (the irresistible Karen Allen) love Boone, for example? What—beyond getting laid and belonging—do any of them want? Where is the drama?

We follow the Deltas for what appears to be most of a semester, from pledge week to homecoming. There are parties and adventures and quite a bit of sex. We’ve got virgins and people smoking pot for the first time and gallons of liquor and two farm animals and the performance of an impressively futile and useless gesture. What we barely have any of is information.

The only things we learn about our characters that we don’t see during the brief run time are that Flounder’s brother Fred was a Delta (and a real closet-case), Otter has perhaps slept with Mandy somehow somewhen, and the Deltas had the medical school cadavers delivered to the alumni dinner. 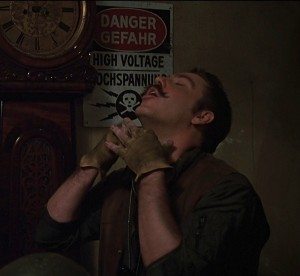 Get a load of those adenoids!

But never, in all the times I’ve watched Animal House, have I stopped to ask myself, “who are these guys?” I knew from the first time I laid eyes on them who they were and what they were about. Even D-Day—and his most significant line simply involves him playing the William Tell Overture on his throat after driving a motorcycle up the stairs.

That’s who he is.

A lack of direction, a lack of information to base your life on: that’s college.

But who’s good or bad in Animal House is intriguing, even understanding that we’re talking about the grandpappy of teen sex comedies. This is particularly so if we take a closer look at the character of Otter. 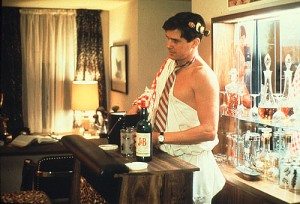 Look at his room. Otter doesn’t really belong in the Delta house.

We hate that sneaky little shit Nedermeyer because he’s a pompous, sadistic creep. We like Boone because he’s funny and charming even if he won’t grow up. But Otter… Otter is kind of a dick.

Even in a film in which college kids are (mistakenly) sleeping with 13-year olds and in which grand theft auto is shrugged off (Otter to Flounder: “You fucked up. You trusted us.”), Otter comes off as the guy who you shouldn’t want around. He doesn’t really belong. He isn’t sweet, not even a little. He can just get you laid.

He’s basically the dodgy dealer character, only what he’s dealing is sex.

In the context of the film, it’s easy to overlook the fact that all he does is use women. That’s it. It makes one wonder what the character did in the script version before Landis took the misogyny out. 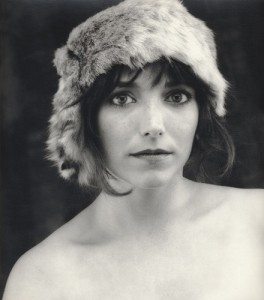 This stunning photo of Karen Allen has nothing to do with this article.

Otter doesn’t get any more character development than anyone else, but look at his key moments: he makes moves on Mandy despite her obvious discomfort; he’s excellent at hitting helmets with golf balls; he fucks Dean Wormer’s wife; he lies to poor Shelly, telling her he was engaged to her deceased roommate Fawn (“Sophomore Dies in Kiln Explosion”) so he can seduce her and then he abandons her and her friends at the Dexter Lake Club where they have to escape dangerous racial tensions on their own. When Babs frames Otter and he is stomped by the Omegas, he doesn’t know why. 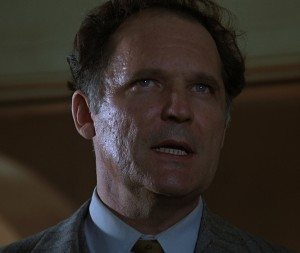 That foot is me.

That’s what he says. Interesting, right?

That’s what I left the theater thinking about; who are the animals in Animal House? The drunken, irresponsible Deltas? The stuck-up, privileged Omegas? The mafioso mayor and the fascist Dean Wormer (John Vernon! Cast after Landis saw him in The Outlaw Josey Wales saying “Don’t piss down my back and tell me it’s raining.“)?

Or is it, really, only Otter who is controlled by his baser instincts?

Because even though this is a film filled with bouncing bare boobs and sex out the wazoo (plus male flesh, too), it isn’t actually anti-woman, unless you’re watching and wishing you were Otter. Karen Allen’s Katy isn’t a sex object. She’s smart and human and as fully formed a character as any other. Same with 13-year old Clorette DePasto (Sarah Holcomb, actually 18 at the time of filming), who isn’t some innocent corrupted by Pinto and then discarded. She’s more self-aware than he is and more mature as well! Compare that to the roles women get in most of the teen sex comedies that followed… like Caddyshack, also featuring Sarah Holcomb as what? The girlfriend who gets pregnant and never really becomes an important part of the story anyway. 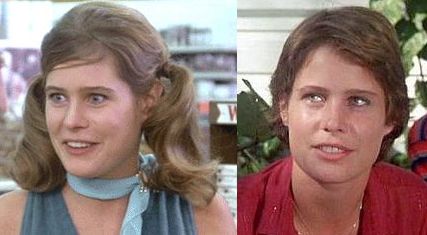 One of these roles is awesome for Sarah Holcomb. The other she gets upstaged by a gopher puppet.

Do I have a point? Well, now that you mention it, not really. I’m just taking this moment to reflect on something odd I’ve noticed about one of my favorite films. Otter is a creep. I’m supposed to like him, but I don’t.

Getting laid is great and all. I’m a fan. But it’s not the point. Pinto wants to marry Clorette. Boone does marry Katy (and, sigh, loses her). Otter becomes a gynecologist. And he probably went on to love films like Superbad and Project X.

I prefer Real Genius and other teen sex comedies in which, sure, boys want to have sex—but they want to have sex with girls they care about. And the girls have a say in the matter.

So I guess that’s the only point I have. Otter doesn’t really fit in Animal House except that he totally does. Not everything is sweetness. We all knew that guy in college. Maybe we even liked him at the time or pretended to. But then we grew up.

Otter’s not a villain. He’s just not nice.

So perhaps what’s surprising is not that he’s a creep but that all the other lugs are so likable despite their myriad flaws. I pledge allegiance to the frat, with liberty and justice for all.

* It is only now, writing this, that I recall that for my high school senior photo I actually posed holding a headshot of Belushi with our eyebrows raised in unison.