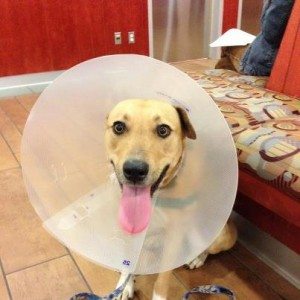 That smile disappeared once she realized we weren’t kidding

Today, my friends, was a rough day. The Hound of Evil hurt her foot and so I had to take her to the vet. The vet installed her with a Cone of Shame. Thus encumbered, the Hound of Evil refused to move, drink water, lie down, or do much besides whimper.

It was fucking awful.

So I took the damn thing off and we watched In Like Flint together on the couch. She did not try to lick her foot once and that was easily the best part of the movie.

Why did I watch In Like Flint, the 1967 sequel to the prior year’s Our Man Flint? Two reasons: 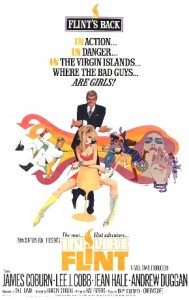 Thinking about Die Hard and its less impressive sequels (sorry Marie), and about what the Supreme Being said a few months ago about Moonraker and about how Daniel Craig is—now that I think of it—more similiar to James Coburn than to Sean Connery, I let some 60’s goofball, pseudo-spy-spoof cinema wash the worry away.

In Like Flint is actually kind of interesting in a completely preposterous way. From the very beginning, it’s clear they’re doing a knock of off James Bond. Flint has fancy gadgets (a cigarette lighter that contains a grappling hook, etc.); he is hella suave and constantly surrounded by lovely ladies; he is a super spy who can’t be stopped; and so on. Even the opening credits feel Bondsian with abstract shots of naked women getting massaged. But then… Flint starts talking to dolphins.

So long and thanks for all the fish? Hello? Hello? They hung up.

Like really: James Coburn, who plays Flint, starts making burloop-loorupp-ulp-ulp-bllrlrlrl noises into the pool and the dolphin asks for a sandwich. Just like in a James Bond film. And I almost turned the movie off then but the dog’s head was on my lap and my back-up choice was a black & white Japanese film about ritual suicide so… dolphin talking and bikini babes won.

There was a story to In Like Flint, more or less. A mysterious cartel of women have surreptitiously taken control of a rocket launch site from their Caribbean beauty salon. They hijack the president and swap him out for an impostor. Why? So they can fill the new space platform with nuclear weapons and thereby force the world to accept women as leaders. 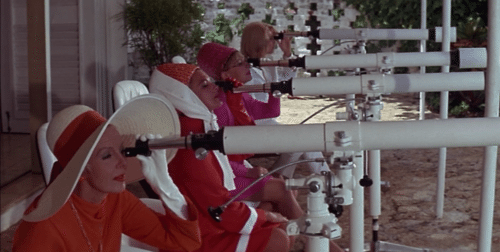 Soon we will rule the world. Until then, more wine spritzer, please.

It is not such a dumb plan, at least when you compare it to the normal James Bond super villain stuff. Of course, when Flint finds out about the villainous plot, he laughs in their faces. 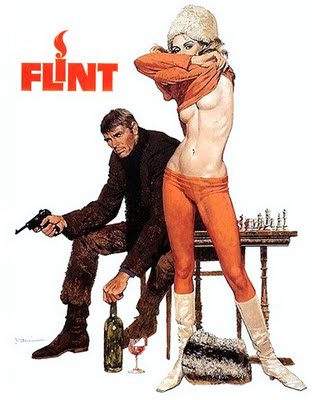 If you are looking for sexy topless women then I recommend this picture. As in this picture ↑, not the film. The film is about as sexy as an ad for Polident.

No, the people who assembled this cinematic wonder were not actually concerned with anything resembling reality or political statements or a delicate touch. The man talks to dolphins. So, in that way, it is like the Die Hard sequels: just an excuse to watch some ka-powie and say hubba-hubba. Although, I must say that In Like Flint was fairly tepid both in terms of action and romance. You will not have much cause to make your zowie face.

James Coburn can be quite good, like in The Magnificent Seven or The Great Escape. In In Like Flint he’s as convincing as Roger Moore after a couple of prescription painkillers and a vodka martini (for either you or Roger Moore, or both).

Also starring is Lee J. Cobb in drag. I’m not sure anything could be more depressing. Lee J. Cobb is a fantastic actor whom I only hope used his paycheck from this film to free the stunt dolphin (*cough* made of rubber *cough*) so they could cavort together down by Marlon Brando’s private island or something.

But, if you’re like me, and your dog is miserable and she demands some 1960’s spy spoof action and she doesn’t want to watch any of the Austin Powers movies (and you reasonably feel the same way), I still wouldn’t really recommend In Like Flint. Have you seen either of the OSS 117 films with Jean Dujardin? Those aren’t bad. They won’t make you want to lick your feet. Or your dog’s feet. Unless you’re into that.

Before I go, though, here is your fun fact of the day. While I intuited that In Like Flint would be like the Die Hard sequels I had no idea there would be a deeper, almost sinister connection. In the first Flint film, Our Man Flint, there was an enemy agent, fond of soup, who gets undone by Flint in a toilet stall. And by undone I mean killed, not, you know, assisted with his pantaloons. This enemy agent? His name?

Also, in In Like Flint, there are some awesome space scenes where actors pretend to move in zero gravity and the space ship rocks because, duh, space waves.

Do not rock the space boat or you will attract space sharks.

Then they make the sweet sweet space love.