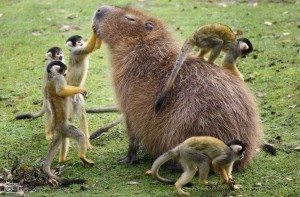 All hail the majestic and innocent capybara

You know what we haven’t done in a while? If you answered “bathe in the blood of innocent capybaras,” you’d be right, but sort of weird. That’s because what I’m talkin’ about is that exceedingly irregular Mind Control feature in which we watch trailers and talk about them.

You will recall we refer to this as Prognisticontemplation.

So let’s do it. (The trailer thing, not the capybara thing, you weirdo.)

Today’s trailer, chosen at random while drinking a beer: 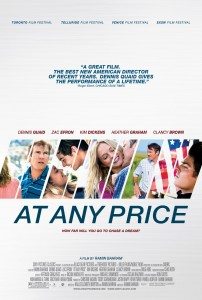 I know what you’re thinking. You’re thinking, “Dennis Quaid has never NOT made a great film, amiright?” You’re remembering the heyday of Dreamscape and Innerspace and That Other Dennis Quaid Film I Liked which may have been The Big Easy.

But these days, it’s young man’s world. And that young man is Zac “my first name is oddly truncated and my last name sounds like a petroleum concern” Efron.

So let’s see what these two titans of cinema have to offer us this year and hope it isn’t a musical about giant asteroids.

Awe-some! I was hoping for a mega-farming/auto racing film and THIS IS IT.

Ramin Bahrani directed this movie and, while I’ve failed to see any of his films thus far, he’s made some stuff that has all the hallmarks of quality. So that means this is a serious film; it’s been accepted by many prestigious festivals; and that you shouldn’t see Dennis Quaid and automatically think it’s going to be pants—and too tight pants at that. 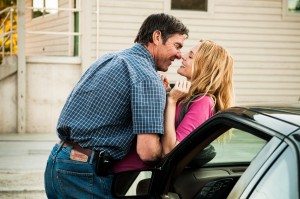 This may be the least attractive photo I’ve seen in a while. I think I’d rather kiss the capybara.

Although, I’ve got to say: it kind of looks pants.

What does the trailer show us? I’m glad you asked. Thank you for being so cooperative and bringing me another beer.

Well, we’ve got some Iowa scenery, wind turbines, crops growing. A local fella says some un-inspiring words about how farmers need to “expand or die.” This contrasts with a classical Norman Rockwellian shot of Dennis Quaid and the underrated Kim Dickens looking out over their property.

Then the Quaid starts to speak. He’s giving his elevator pitch about how potent a farmer he is. He’s the best farmer he ever saw. His seed is strong! But oh noes! He gets slapped down by the new #1 biggest farmer in Decatur. (I’ve got a t-shirt that says that, by the way: “I was #1 in Decatur!”) 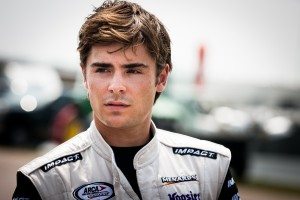 I get that naturally tussled look from driving race cars through corn fields.

After that, we sink into the trailer park where suggestive music competes with suggestive editing to suggest you might want to see this film. Quaid and his boy Efron do some ambulance chasing, trying to rack up some prime Grade-A farming acreage at a funeral. Sa-wheet! They totally got that dead guy’s land just by acting like total douche bags! Maybe this film won’t be pants?

But then, just when you were getting excited for this year’s Places in the Heart, Zac Efron fires up the blowtorch and drops his bad-news bomb. “I’m not staying here. I’m racing cars.”

Of course you are, Zac! You’ve got a need for speed and you do kinda remind me of young Tommy Cruise. (Which auto racing film, by the way, features the hotter, more talented Quaid brother—Randy.)

Then the kids make out and crash some cars and pretend like they’re in The Dukes of Hazzard. I hope Boss Hog is in this picture. I doubt it, though. We’d be lucky to get some Rosce P. Coltrane. 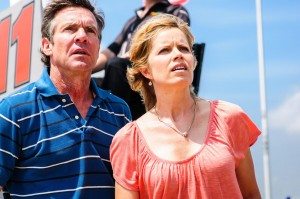 In case you missed it, titles appear to tell you that this film is a “riveting drama of fathers and sons.” I must admit to feeling less than riveted so far, however. This trailer is about as invigorating as a plate of old nachos. There’s very little in the way of visual or thematic surprise, just a whole lot of jiggerypoof, which is a word I just made up. I think. I’ve had a few beers.

In the trailer, our hero family gets torn between those two classic temptations: NASCAR and agribusiness. Sounds like a tragic ending to me. Maybe if they’re lucky they’ll learn how to grow genetically modified race cars? Unlikely, I guess.

Then things start to look up, because there are tawdry women about!

You know how I can tell? Boobs, that’s how. Boobs on women, as is only proper—but displayed provocatively, which is only proper when you’re cuckolding poor Kim Dickens.

Have I mentioned that I like Kim Dickens? Well I do. She deserves more respect than this. She deserves Randy Quaid at the very least. 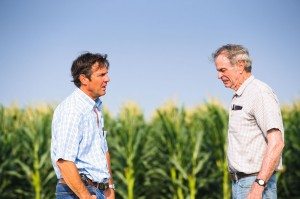 Chelcie Ross on the right there has been in damn near every film ever made.

I’m bored now, and apparently the trailer police know it because they’ve thrown yet another wrinkle into the plot: the gubernmint is coming to investigate your seed, Dennis. Why? Who knows but it’s probably got something to do with steroids and shea butter. I’m just guessing. Maybe the Quaid-lude should try driving NASCAR with his son?

And isn’t “the Quaid-lude” the best nickname you’ve heard me make up today? I thought so. Thanks.

At least no one has gun in this movie. Oh wait. There it is. And you know what Chekhov says about seeing a gun in the first act that’s really probably more like the third act? That’s right! Someone, a very lucky someone, is going to buy us a round of shots.

Just like that, the trailer is over with a touching speech about happiness. Raise your hand if you’re happy. Anyone? Hm. Maybe we all need another shot? It’s your round, I think.

I suppose this film could be good in that left-field surprise way. Maybe they’ll cut a trailer that isn’t trying to be everything to everybody and focuses in on just the auto-racing-agribusiness-philandering-gun fights? That might be a bit better. Hard to say.

I think I’ll let someone else see it first and let me know.