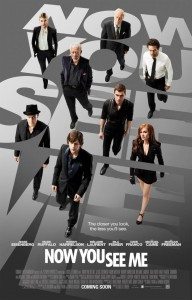 From the marketing, I had expected Now You See Me to be a thrilling tale about stage magicians who rob banks as some sort of master scheme to make Jesse Eisenberg seem like a leading man. Never in a million years did I expect that this film would actually pull off something much more remarkable. Something so daring, something so magical, that I simply must share it with you now in this decidedly ungenerous review.

Now You See Me represents the greatest illusion I have ever witnessed. Beneath all the layers of subterfuge and sleight of hand and misdirection there lies the most miraculous substance of all: abso-fucking-lutely nothing.

Do you know how hard it is capture abso-fucking-lutely nothing on film? It’s really abso-fucking-lutely difficult, that’s how hard it is. Something almost always gets in front of the camera, even if it’s just by accident — usually Jesse Eisenberg, or Isla Fisher, although, to be fair, it can occasionally be Woody Harrelson, too, or James Franco’s less irritating brother Dave. 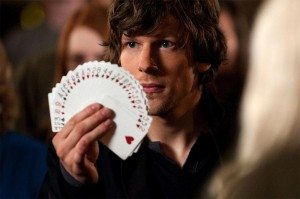 Is this your credit card number? Boom. Genius.

All of whom play the best magicians in the damn world in this picture, yet somehow, between them, they lack a single ounce of stage presence. I swear, watching them perform on a Vegas stage, with Louis “Titans will Clash” Leterrier’s camera zipping around like a squirrel with glandular issues, you’d think that they were reading you the specials at Denny’s without their glasses.

This next magic trick comes with a side salad. You have your choice of blue cheese, ranch, thousand island, or ranch. Surprise! You got giardia! For my next trick, I’m going to spit in your mother’s purse.

The tag line to this film is “The closer you look, the less you see” and I’ve not read something that true on a poster since Kenneth Branagh’s Frankenstein came out.* In Now You See Me, I looked so close that I saw less than would seem possible even in a world of fantasy. 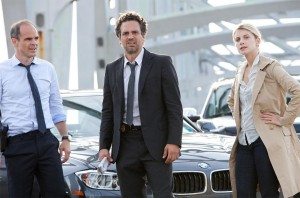 This expression pretty much says it all.

There is, of course, a whole lot of bait and switch going on and even more expository dialogue in which smug people tell you how you’re not smart enough to see the thing behind the thing before the thing look over there a duck! But I am the smartest guy in the room — or at least I was tonight — because no matter what they said on screen, I saw through the deeper illusion.

There is no film here. That’s the trick. All the acting, even that which is performed by good actors like Mark Ruffalo, is as unbelievable as a toupee made of a live ostrich. You can’t really blame the cast, though. There is no believable way to perform scenes this moronic. There was no character for anyone to inhabit, just single note sketches pulled at random from some 1980s fashion magazine quiz.

Okay. Now we need two people to kiss, so I guess it’ll just be you two despite the fact that it isn’t even clear you know each other’s names. Okay. Now we need to make it look like someone stole a lot of money, so, uh, I know! Let’s literally stuff his car so full of money that he couldn’t possibly even get in it. That’s exactly what a thief would do! Money car! That’s a meme, right?

The music sounded like sitting in a room full of people learning to play Enya hits on the tuba. The cinematography felt like the dashcam on a bumper car. The pacing had me simultaneously exhausted and bored. The special effects were so captivating I considered eating my popcorn with my eyes, but my eyes do not like fake butter. I think you get what I’m trying to say.

It was not a good film.

Yes. You can spend time looking close, trying to figure out the grand mystery of what these magicians are doing, but if you succeed you will only feel like a complete fool. Because it’s all misdirection. The real trick was getting you to buy a ticket in the first place. Everything else is an illusion and one which it is my pleasure to spoil.

Please! I beg you! Let me drown!

*I swear on the rapidly approaching ruins of Morgan Freeman’s career that when Frankenstein came out the tag line on the posters in L.A. read “Don’t bother to scream.” Now all I can find online is “Be warned. It’s alive.” which, granted, is also kind of terrible but only half true. Someone find me a picture of the “Don’t bother to scream” poster and I’ll give you a shiny new penny.